The exhibition Fire & Brimstone casts a watching eye over the corporations and individuals who continue to choose profit over people and climate catastrophe. Before there was a virus crisis, many expert reports warned of the need to “close the inequality gap”. The reports all pointed to our declining health, life expectancy and rising numbers of “preventable deaths”; especially in prisons, aged care and rural and remote communities which, in Australia, largely comprise First Nations peoples. The most shocking work in Fire & Brimstone is 'Kumanjayi', Chips Mackinolty's stark red and black text memorial to the 437 black deaths in custody since the Royal Commission into Aboriginal Deaths in Custody (Report 1996). Very few of its 330 recommendations have been implemented. Every year, Aboriginal people continue to die in custody. Mackinolty’s work is subtitled, "and still counting".

For some decades the four artists and thinkers Therese Ritchie, Chips Mackinolty, Todd Williams and Djon Mundine, have asked us to open our eyes to our collective delusions and denial. They have all worked in remote communities on health and art projects. Their sophisticated fine art prints and video work audit the depths of the Covid-19 crisis; a darkness hiding fast-tracked approvals for the fracking and resource extraction that shakes the landscape and causes extreme weather havoc. The theme of “fire and brimstone” consigns us to a hell of fire, floods, famine and pestilence, not heaven.

Therese Ritchie's work 'They all look the same to me, shows the coronavirus-riddled figure of Governor Phillip disembarking at Sydney Cove (after Arthur Phillip by Francis Wheatley, 1786 . National Portrait Gallery, London), his fleet carrying the cholera virus that may have killed up to 60% of Indigenous people in the first of many plagues. Chips Mackinolty's work 'Stay at Home' centres on Uluru the sacred red rock at the heart of the nation and says, "avoid carrying the sickness". The contagion is more than viral; Prime Minister Scott Morrison, urges us to put “the economy” before public health, restraint and coronavirus elimination. This apocalyptic chant of “trade” is mingled with opportunism: it is highly profitable for a few corporations and individuals to destroy or damage the world. Instead of reflection and reform of systems in crisis: of our infamously privatised aged care and health system and de-regulated environmental, heritage and Land Rights controls in order to override consultation, consent and regulation. Therese Ritchie’s work ‘King Coal’ cautions that when Australian fossil fuels — primarily coal — are burned overseas, the amount of carbon dioxide they produce is higher than the exported emissions of nearly all the world's biggest oil and gas-producing nations. We increase fossil fuel exports knowing they will cause mass extinction events.

In 2012, Therese Ritchie initiated a series of satirical exhibitions called ‘The LittlePrick Editions’, inviting artist colleagues to make works satirising sensationalist magazine covers focused on politicians' inappropriate or racist comments; corruption and hypocrisy. A huge wall of LittlePrick covers introduced Ritchie’s recent, extraordinarily popular, Burning Hearts retrospective at Museum and Art Gallery of the Northern Territory. The fake news covers were published by "name and address withheld". One of the names withheld was that of musician and collage artist Todd Williams. Two years later a limited edition book The BIG book of LittlePricks. An artist’s safe guide to the Northern Territory was published. Posters, and prints, banners and demonstrations make colleagues and collaborators of us all.

In this spirit the collaborators on Fire & Brimstone invited long-term colleague Djon Mundine to exhibit a short moving image artwork, Wali (Possum-Marsupial), in Fire and Brimstone. Wali makes the point that animals can be totemic or ancestor beings and, as such, are the foundations of ceremonial culture. Like his Aboriginal Memorial (1988), Djon Mundiine's projects underwrite beauty and civility with profound loss and grief. 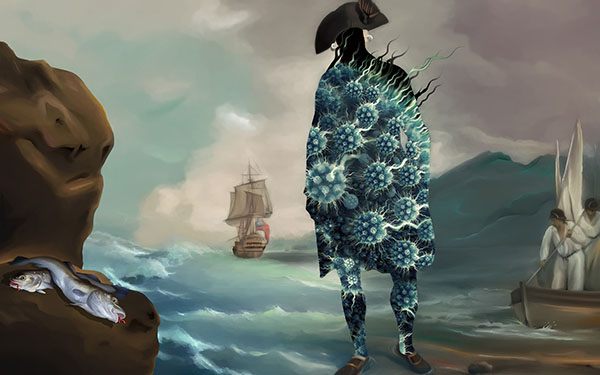 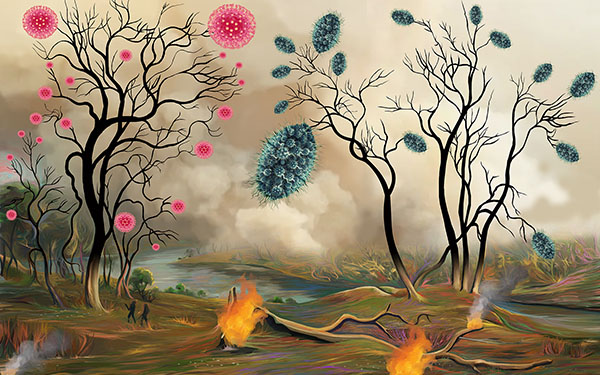 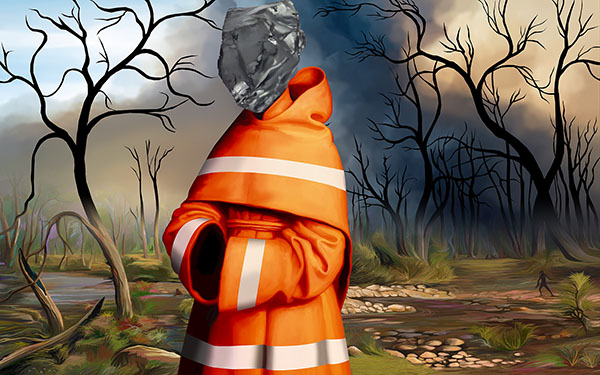 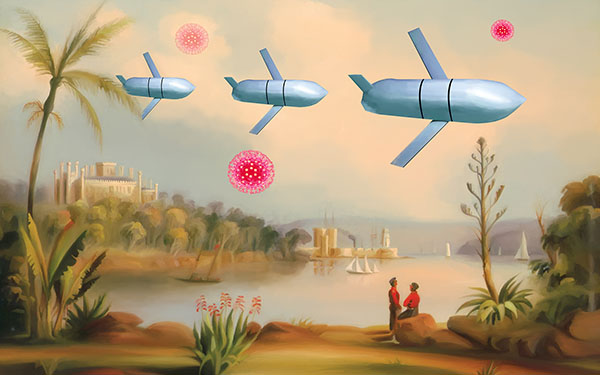 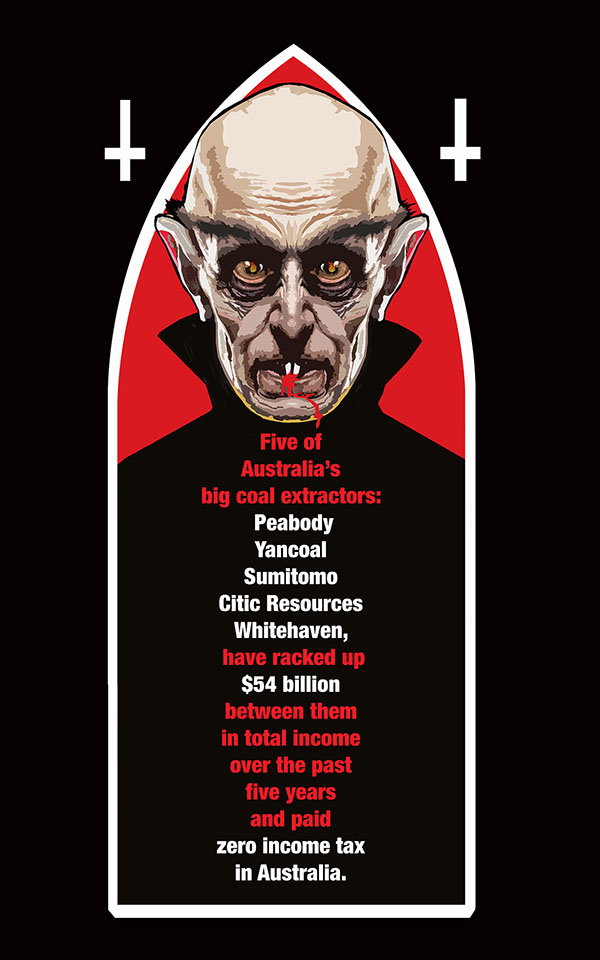 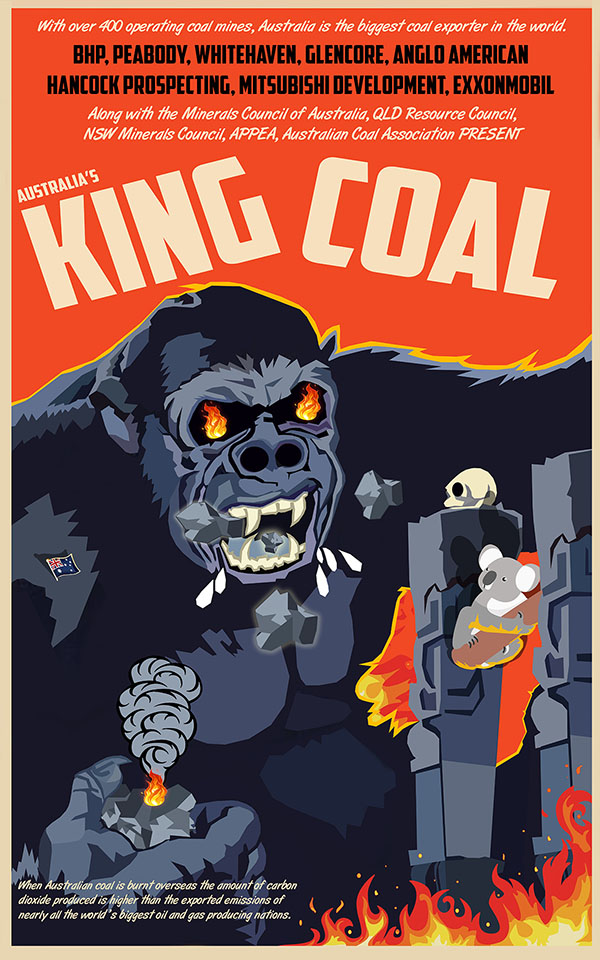 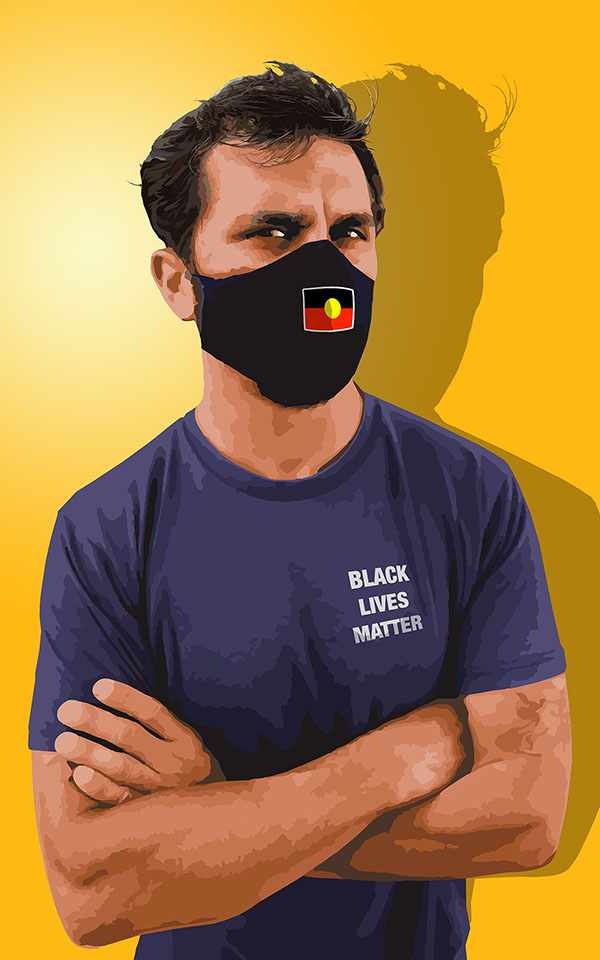 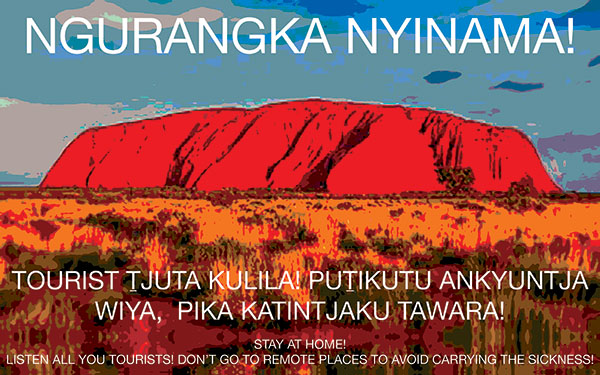 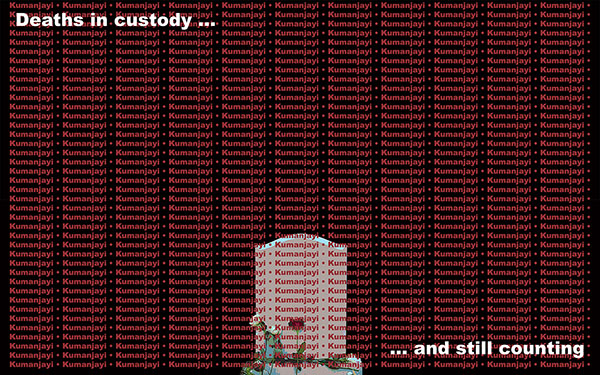 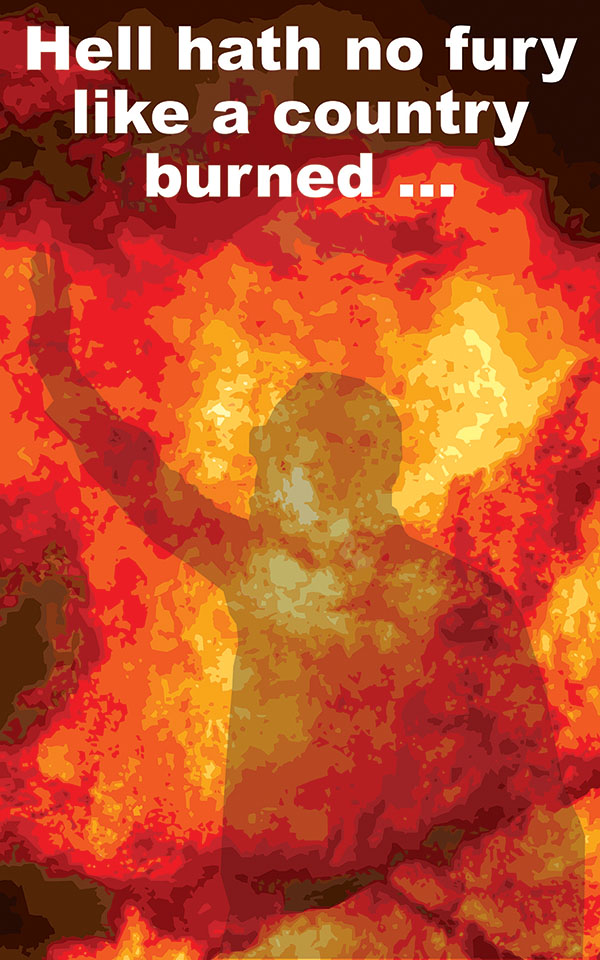 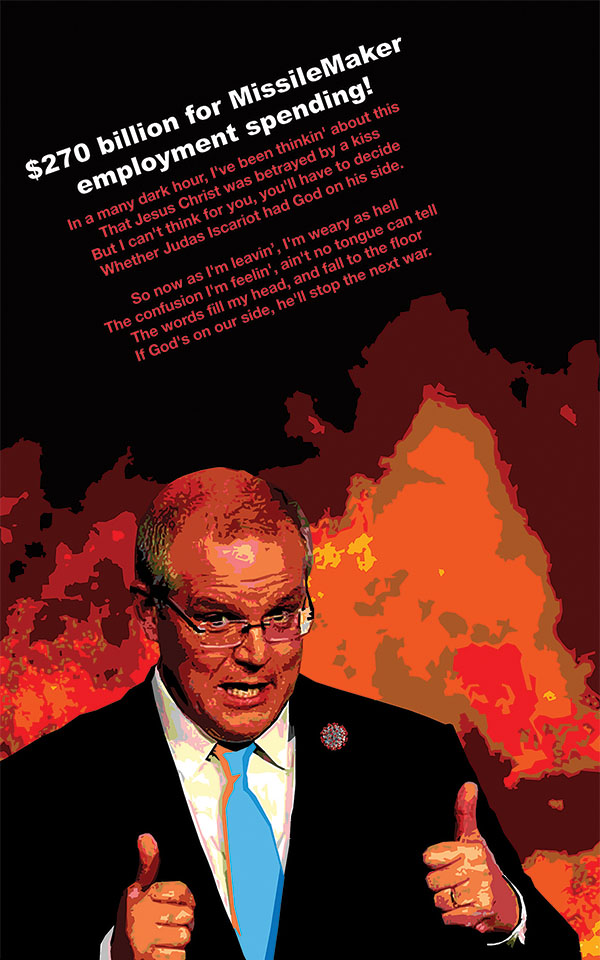 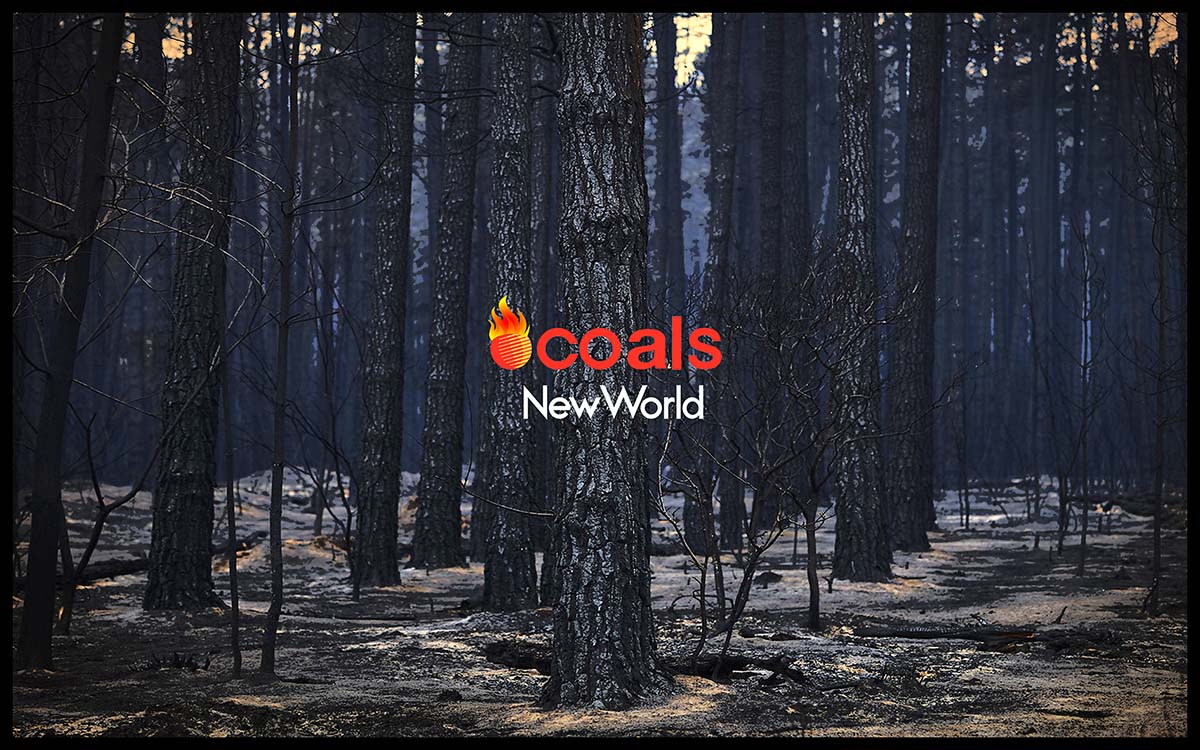 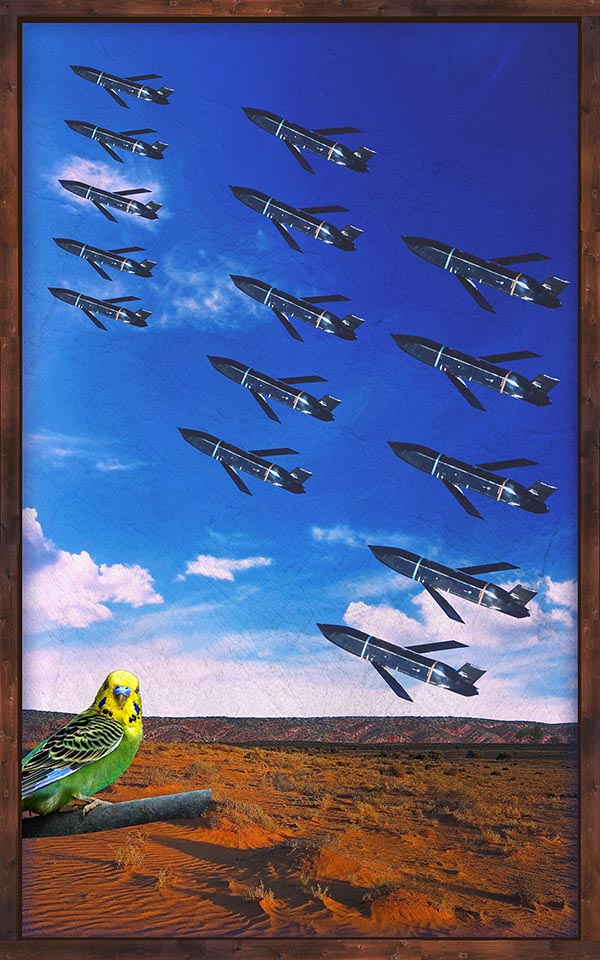 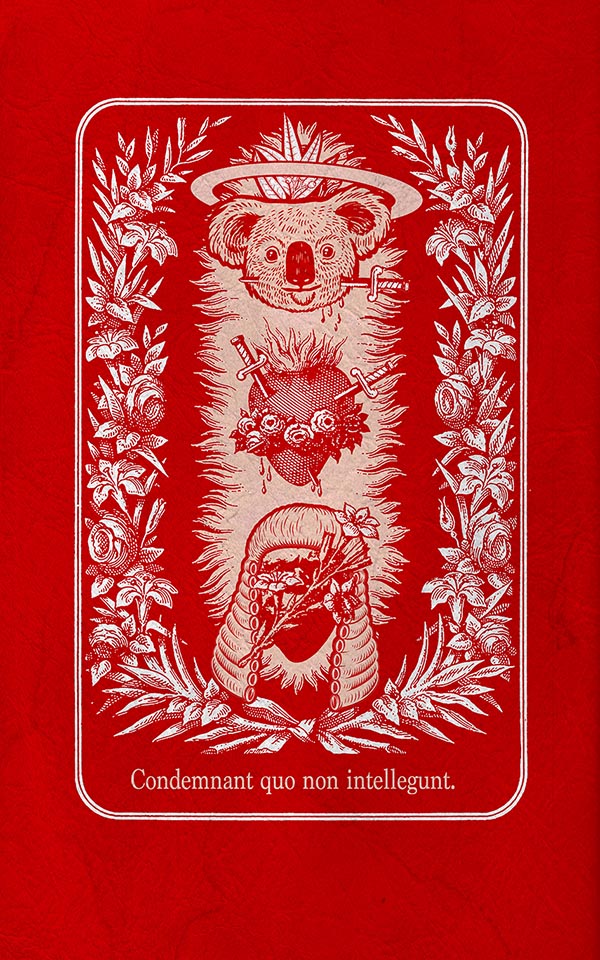 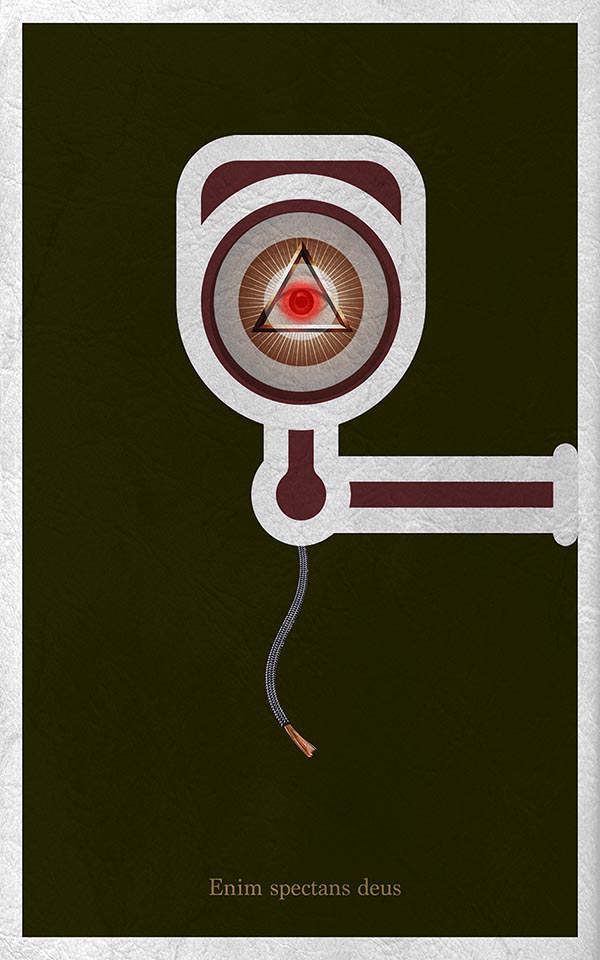 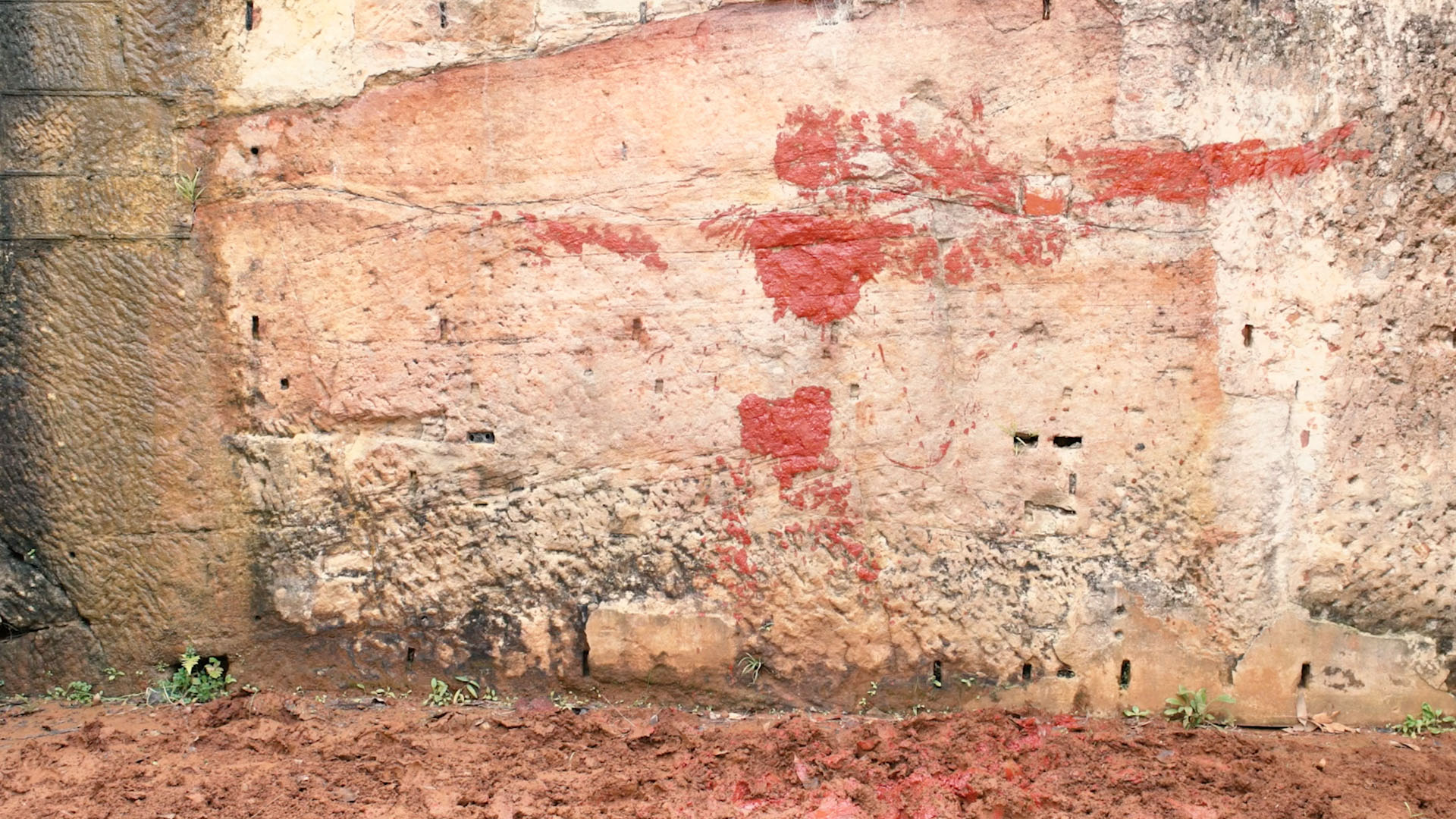 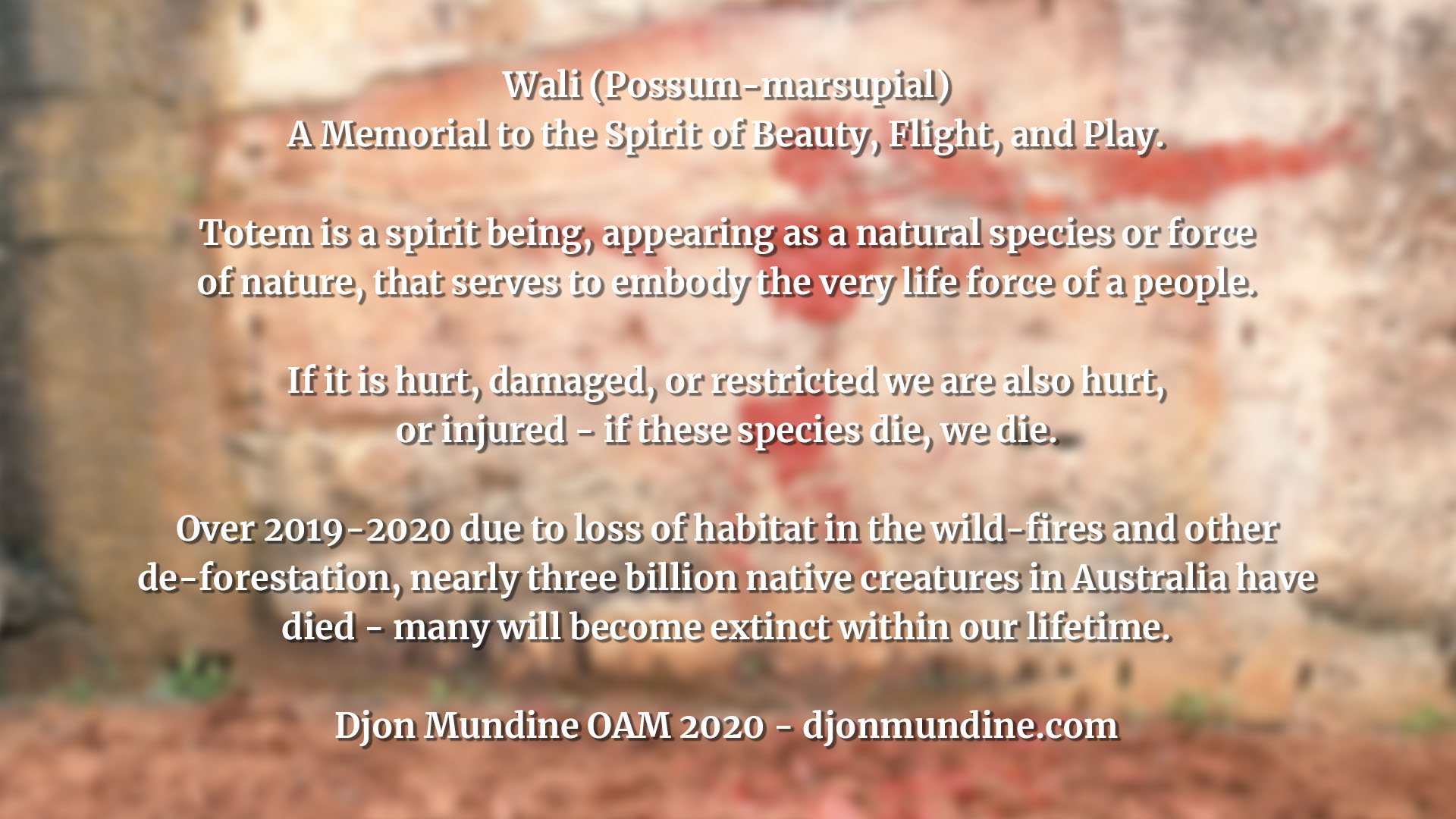 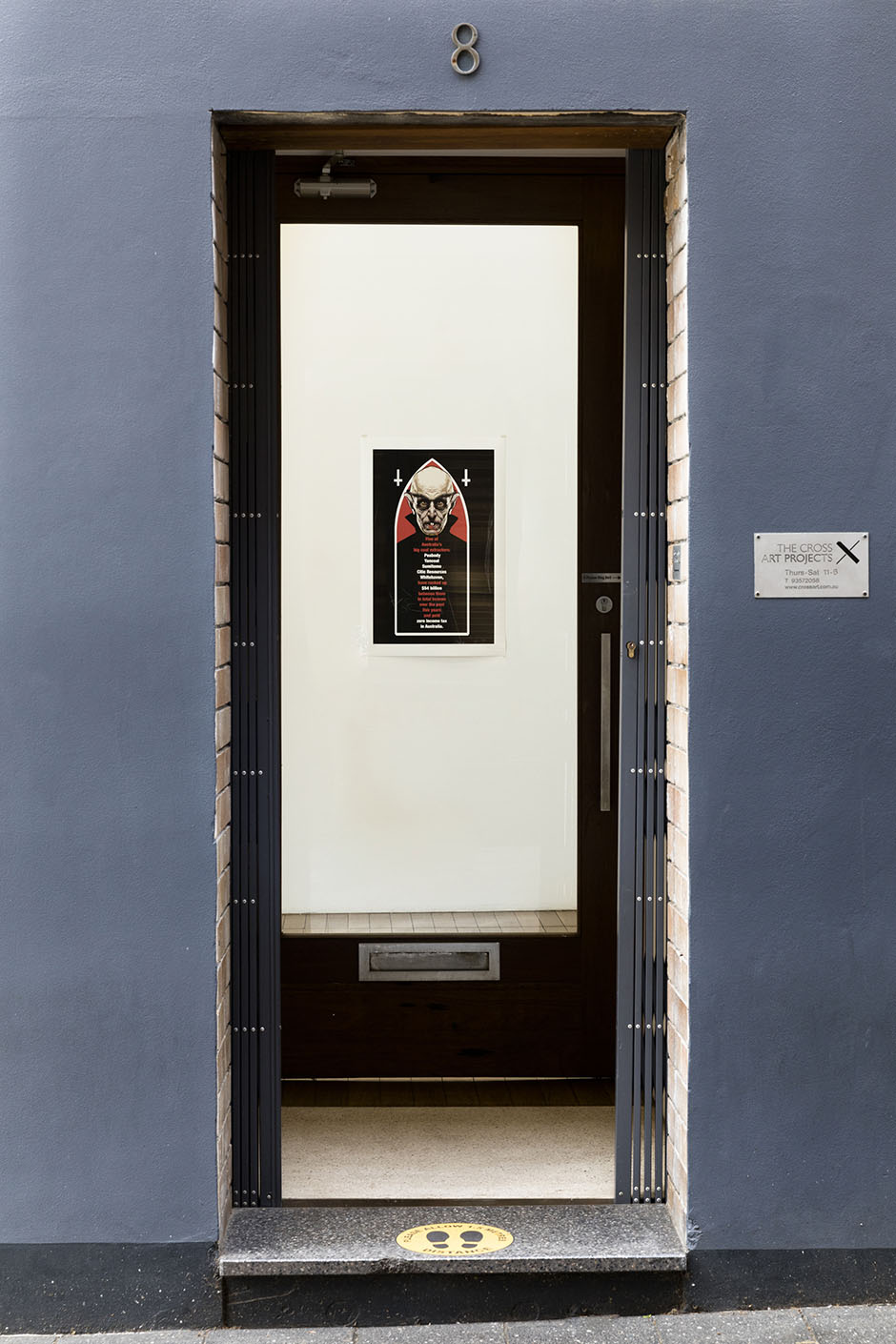 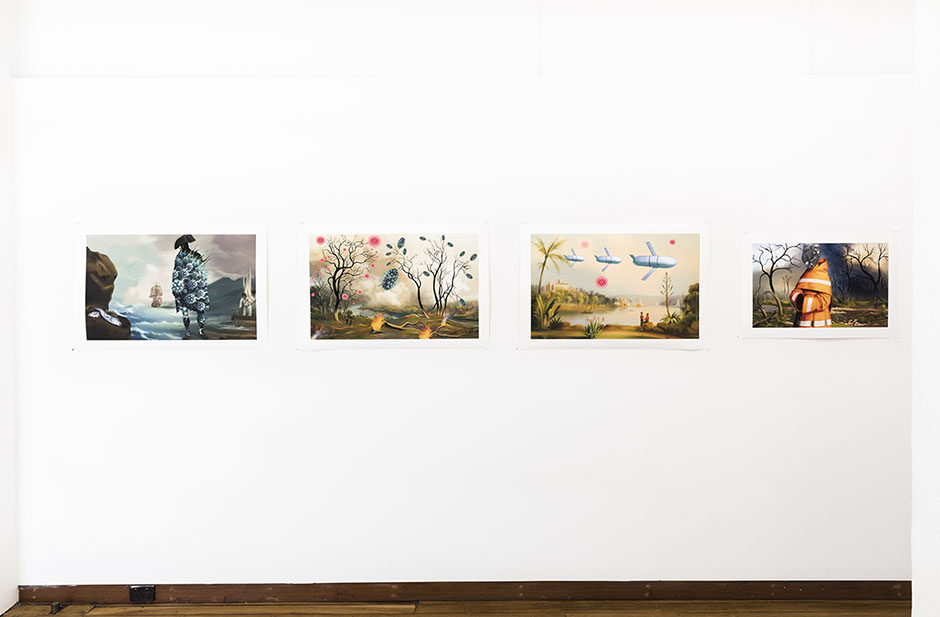 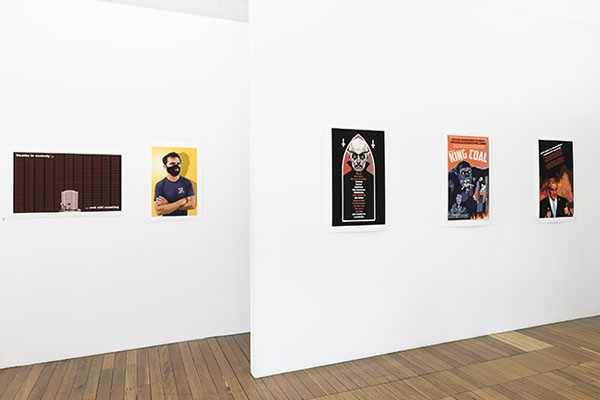 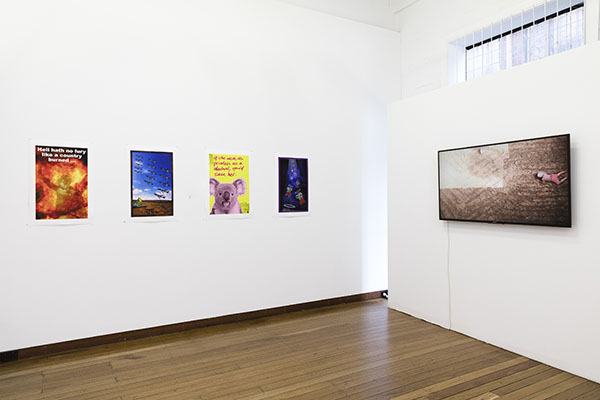 Chips Mackinolty creates posters that combine vibrant design with acerbic wit and pithy social comments: imagery that defines distinct periods in Australian social, art and design history. Chips was a key figure in Sydney’s radical poster movement in the 1970s working with the Earthworks Poster Collective (established in 1971). He continues to define history, in the wider north: Darwin, Alice Springs, Beirut and Palermo. Mackinolty and Ritchie have worked together for decades on special events and campaigns captured in their 2010, survey exhibition, Not dead yet: A retrospective exhibition of Therese Ritchie and Chips Mackinolty at Charles Darwin University Gallery.

Curator, writer and performer Djon Mundine was art and craft adviser / curator in the proudly traditional Aboriginal communities of Milingimbi in 1979 and Ramingining in Arnhem Land for sixteen years. Here he originated Australia’s greatest artwork, the Aboriginal Memorial, comprising 200 painted funeral poles by forty-three artists from Ramingining, each symbolising a year since the 1788 British invasion for the Sydney Biennale. Djon has worked with Therese Ritchie in Four Women: (I do belong) Double, Lismore Regional Gallery (2017) and Ritchie and Mackinolty in A Widening Gap: The Intervention, 10 Years On at Counihan Gallery In Brunswick (2018).

Therese Ritchie started in the Northern Territory as an art student moving from painting to take up photography, working with Martin Munz at what was then the Darwin Community College. Her early work was shaped in three ways. The first was being asked in 1988 to teach photography to young people at Borroloola, and document the historic return to country, on foot, through Yanyuwa lands that had been cut off from their traditional owners by the pastoral industry for 70 years. The second was working with other young artists at collective workspace the Werehaus Artist Coop. She documented political actions over Pine Gap and the anti-uranium movement. The third was in the 1990s working at Green Ant Research Arts and Publishing (with Chips Mackinolty) where she worked as a photographer—including as a freelance photojournalist for the southern Fairfax and Murdoch newspapers. Curator Julie Ewington’s insightful exhibition Contemporary Australia: Women at QAGOMA, Brisbane (2012) consolidated her growing fine art reputation.

Todd Williams works in Darwin as visual artist, animator, graphic designer, musician (Swampjockeys), DJ, and a film maker. He holds a Fine Arts degree from Darwin Institute of Technology (now Charles Darwin University) and since 1985 has exhibited in Territory galleries and local street corners. He is currently the chief creative for the VAMPtv project at the Northern Territory Music School.

Koulla Roussos is a Darwin based criminal law barrister, arts-law lecturer, independent curator, creative producer and artist whose curatorial approach is influenced by her experiences living in culturally diverse locations. Travelling between Darwin and Melbourne, she is currently completing her Master of Art Curatorship at the University of Melbourne. Her curatorial projects include an exhibition with Matthew van Roden and Tarzan JungleQueen and street art for Darwin Council.

We acknowledge and respect all Traditional Owners & Custodians on whose Lands we live, work and travel through. Thank you to the artists, Koulla Roussos and Julie Ewington, Don Whyte Framing in Darwin; Video: troubleshooter, Gotaro Uematsu and Carriageworks; The Cross Art Projects: Belle Blau, Simon Blau, Phillip Boulten and Susan Gilligan.

K. Roussos, Fire & Brimstone: Chips Mackinolty, Therese Ritchie and Todd Williams, political art from the periphery in the time of the great pandemic. > Download as pdf