Apartment Architects of Kings Cross is a document and exhibition project profiling the contribution by important and well-known architects, from Emil Sodersten and Aaron Bolot to Harry Seidler, to designing Australia’s first high-density urban experiment. But the focus is on revealing exciting less-known architects.

Royal Commission into Planning for Sydney, in 1910

Urban Pioneers: Apartment Architects of Kings Cross begins with the Royal Commission for the Improvement of the City of Sydney and its Suburbs in 1909 and ends with the battle between residents and Harry Seidler over his contentious Horizon Tower on the old ABC TV Forbes St site, in the early 1990s.

The Royal Commission into Planning for Sydney, in 1910 published findings that remade Sydney along new planning ideas, especially those of the City Beautiful movement and its motto of 'convenience, utility and beauty'.

We owe the widening of Elizabeth, Oxford and William streets (with a tunnel under King's Cross) and uniform building heights along William Street and Darlinghurst Road to architect John Sulman’s pivotal role and advocacy. Sulman was adamant that city buildings should provide as much sunlight and ventilation as possible, for the good health of residents. The Royal Commission set the principles for the buildings setbacks and heights on Darlinghurst Road, Willian Street and the Tewkesbury neighbourhood in Darlinghurst.

The tall buildings in Darlinghurst Road (such as the Kingsview Hotel and the Crest Hotel) were originally built for use as dedicated accommodation hotels, whereas the lower ‘walk-up’ buildings were for mixed commercial and residential use or exclusively residential. 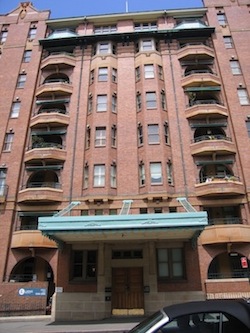 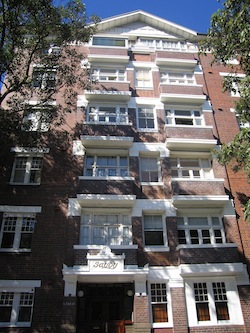 Kingsclere (1912), built in a boom period and designed for the exclusive tenant market, ignited the era of flat construction in Potts Point. But the distinctive tower designed by Halligan and Wilton was a solitary landmark on the skyline until recovery from the Great War in the booming 1920s. Kingsclere’s Edwardian decorum contrasts with new neighbour Byron Hall’s (1929) combining of elements of related architectural styles such as Georgian windows and Classical pediments.

Burcham Clamp — Wintergarden, 1922 in the middle of Darlinghurst Road and Hampton Court on Bayswater Road, 1919).

Claud Hamilton — Hamilton’s grandest buildings are Savoy (1919), beside St John's Church and the Darlinghurst ‘city home’ to Dame Eadith Walker from 1919 until her death in 1937) and Byron Hall (1928), Macleay Street, but there are many more to be discovered. They include Regents Court (1926) and Sandringham (1932) on Springfield Avenue; Wirringulla (1927) and Kaloola (1927) in St Neot Avenue; Lakemount (1933) in Roslyn Gardens and on Darlinghurst Road St Johns Flats (1916); Versailles (1929) and Normandy; and Tennyson House (c.1928) in Farrell Avenue. There are others including the Kookaburra Cafe Building at the corner of LLankelly Place and Darlinghurst Road (amongst others).

Other significant contributions were by EA Scott: Greene & Scott The Manar (1919), Macleay Street; and Kurrajong (1927) on Darlinghurst Road. They designed and built for long-term tenancy by the emerging upper-middle class and professional women. A few buildings were designed for nomadic actors, singers and musicians, especially the legendary artist and music publisher Rex Shaw's St James Flats on Stanley Street.

Company Title: They also experimented with unique ownership systems. Most of the best loved and best cared for buildings, from Macleay Regis and Franconia in Potts Point to Mont Claire and Beaufort Court in Darlinghurst, and Mewdon, Ashdown and Oceania in Elizabeth Bay, are Company Title. This distinctive form of shareholding in buildings contributes greatly to the area’s unique and diverse communities.   To a limited extent these ideas about vital mixed communities extended into public housing like the winning design for Sydney City Council’s model workmen’s dwellings, a 30-flat building in Dowling Street by Peddle, of Peddle, Thorpe and Walker, whose ideas were also influenced by the progressive US-based Church of Christ. 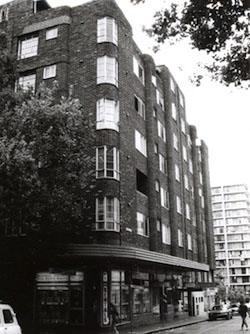 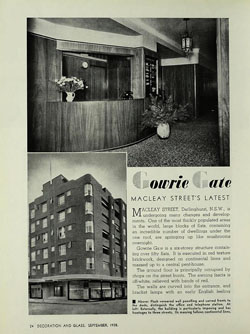 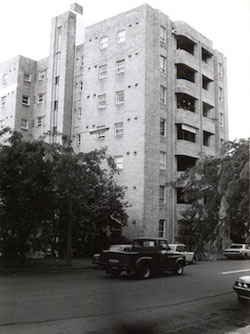 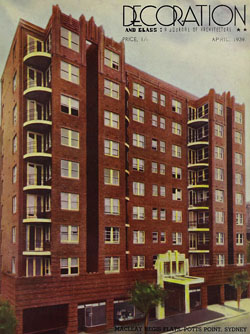 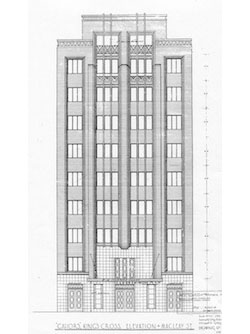 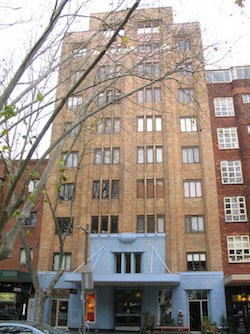 Kings Cross is also world-renowned for its Art Deco and Modern architecture.

Emil Sodersten was the leading Australian architect working in the Art Deco style whose imaginative planning and massing and lavish brickwork earned him 'the contemporary appellation of a modern Horbury Hunt'. Sodersten's elegant Kingsley Hall was an elegant contribution to the transition from Darlinghurst Road the grand Victorian buildings facing Fitzroy Gardens. His key flat buildings include the 9-storey marvel Birtley Towers (1934), Twenty Apartments (1930), Cheddington (1930), Kingsley Hall, (1925–completed 1931), Werrington and Wychbury Towers (1934, side-by-side on Manning Street) and the supremely elegant Marlborough Hall (1938) on Ward Avenue. Often overlooked is the texture and often thoughtful contribution by the 3-storey walk-up flats in this 'middle third' architectural period of the 1930s and 1940s that contribute much to the diversity of the area. Kingsley Hall (1925) is a fine example of a purpose-built inter-war Art Deco apartment building designed by Emil Sodersteen. As at 2019, following the threatening re-development of the consolidated 'Bourbon and Beefsteak' site  and resident activism, Sydney Council City finally proposed its heritage listing. 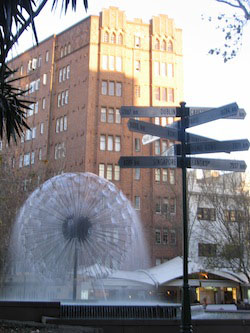 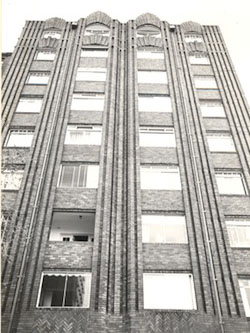 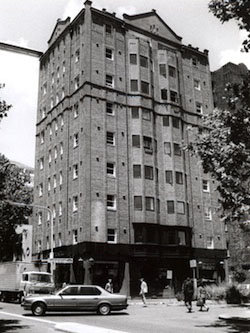 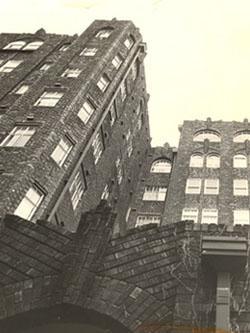 Others looked to European experiments, like Dudley Ward’s influential buildings The Wroxton (1936, Roslyn Gardens) and Gowrie Gate (1938, Macleay Street) that picked up on innovations in public housing in Germany and Holland; John R. Brogan and William Crowle’s Wyldefel Gardens (1936), with its stepped communal gardens down a hillside, is based on a housing scheme outside of Oberammergau in Germany.

Some of these innovators have 'dropped between the cracks' says architectural historian Charles Pickett. But Charles Pickett and Caroline Butler-Bowden’s exhibition at Museum of Sydney and book, Homes in the Sky: Apartment Living in Australia (2007), did much to redress these successful transformations.

After the second World War another wave of innovative and often émigré artists made their contribution, and in the 1950s and 1960s names like Douglas Forsythe Evans, Theodore Fry, Hugo Stossel and Harry Seidler take over from Crane & Scott and Sodersten. 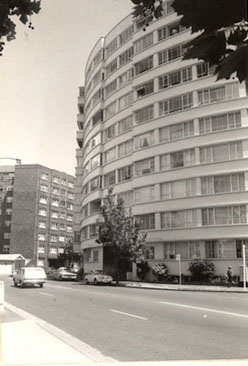 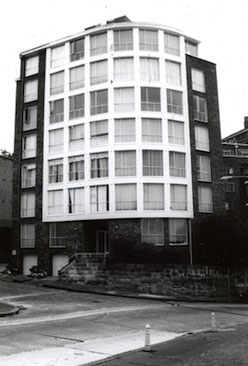 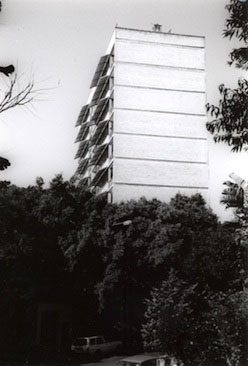 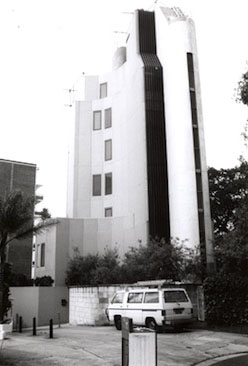 The visual impact and harmony of this dense array of buildings owes much to the area’s distinctive topography and the overlay of land grants and subdivision patterns on the area: a sandstone ridge top which gradually slopes to the North and drops sharply to the east. Macleay Street was laid out in the 1820s along the ridge with land grants to both sides. The subdivisions, beginning with the Macleay Estate in 1861, are seen today in the width of building frontages.

William Street was widened in 1916 and Darlinghurst Road became chic, but the final subdivisions and building didn’t start until after the Great War. Thanks to John Sulman, Darlinghurst Road remains an intact inter-war heritage streetscape of predominantly 3-storey City Beautiful buildings.

Garden Island’s expansion post-war saw Macleay Street extended at Wylde Street, finally linking the toffs of the point to Woolloomooloo wharves. Until recently the area was well served with public transport: trams then bus services (including the legendary 311 route) moved freely around 20-metre-wide Darlinghurst Road and Macleay Street to William Street and then Sydney CBD. In Darlinghurst the local 389 bus route follows the old tramline.

Most other roads with distinctive flat developments are elegantly wide: Greenknowe Avenue, Roslyn Gardens and Ward Avenue, Elizabeth Bay Road and Craigend Street, Victoria Street and Challis Avenue. The railway extension, the Eastern Distributor and, finally, the notorious road closures and obstructions for the Cross City Tunnel fragmented and congested many points in the area.

New parks were designed to complement the City Beautiful the first and most notable being those designed in 1970 by Ilmar Berzins, Australia's first qualified landscape architect, to complement El Alamein Fountain, designed by architects Woodward and Taranto. Berzins was ahead of his time making environmentally sensitive interventions into the public domain. His gentle modernism can also be felt in Hyde Park's Sandringham Gardens and in lovely little McElhone Park, in front of Elizabeth Bay House. Sydney's Fitzroy Gardens are now heritage listed by the National Trust as one of Australia's great parks

A lesson is that scale is the key to successful urban areas. From the mid-1990s, tower-type development contributed to a loss of scale. True to form, Seidler’s 43-storey Horizon Tower made a statement by casting its legendary sundial shadow over Darlingurst. But most of Seidler’s buildings are conforming and widely accepted, from his earliest residential design Ithaca Gardens in 1960, to Ercildoune (1965), Victoria Point, Aquarius (former Florida Tower Hotel, 1965) and 50 Roslyn Gardens. The commercial success of Horizon Tower and its gated community ushered in the era of architect or designer 'branded' developments.

Shadowing and bulkiness has affected the streetscape of Macleay Street where the Landmark Hotel and Rockwall apartments, between Manning Street and Tusculum Avenue, now dominate (reaching a height of 70 metres). On the eastern side of Macleay Street, between Fitzroy Gardens and Wylde Street, the built scale is from two to twelve storeys (9 to 36 metres). On the western side of Macleay Street, 9-storey flat buildings are randomly interspersed with 2-storey commercial/retail buildings plus the odd recent 20-storey numbers (a range from 8 to 70 metres). This happened when hotels were rezoned to residential giving a windfall. Darlinghurst Road, because of its sub-division into small narrow lots, has retained its unique streetscape.

Kings Cross has always thrived on coexistence and change but keeps its high and low character.

Jo Holder with thanks to Anne Higham at the Institute of Architects, the Art Deco Society NSW and local architects.

About the heritage of your building

NSW Heritage Data Base at https://www.environment.nsw.gov.au/Heritage/listings/database.htm

The National Trust of Australia (NSW) maintains a Register of landscapes, townscapes, buildings, industrial sites, cemeteries and other items or places which the Trust determines have cultural significance and are worthy of conservation. The NSW Institute of Architects in Tusculum St Potts Point maintains a significant Twentieth Century Data Base.