Lin was Garage Graphix’s Creative Director (1981 until 1996). Marla Guppy was artist in residence (one of several) who helped develop a visual identity of 'new' Western Sydney 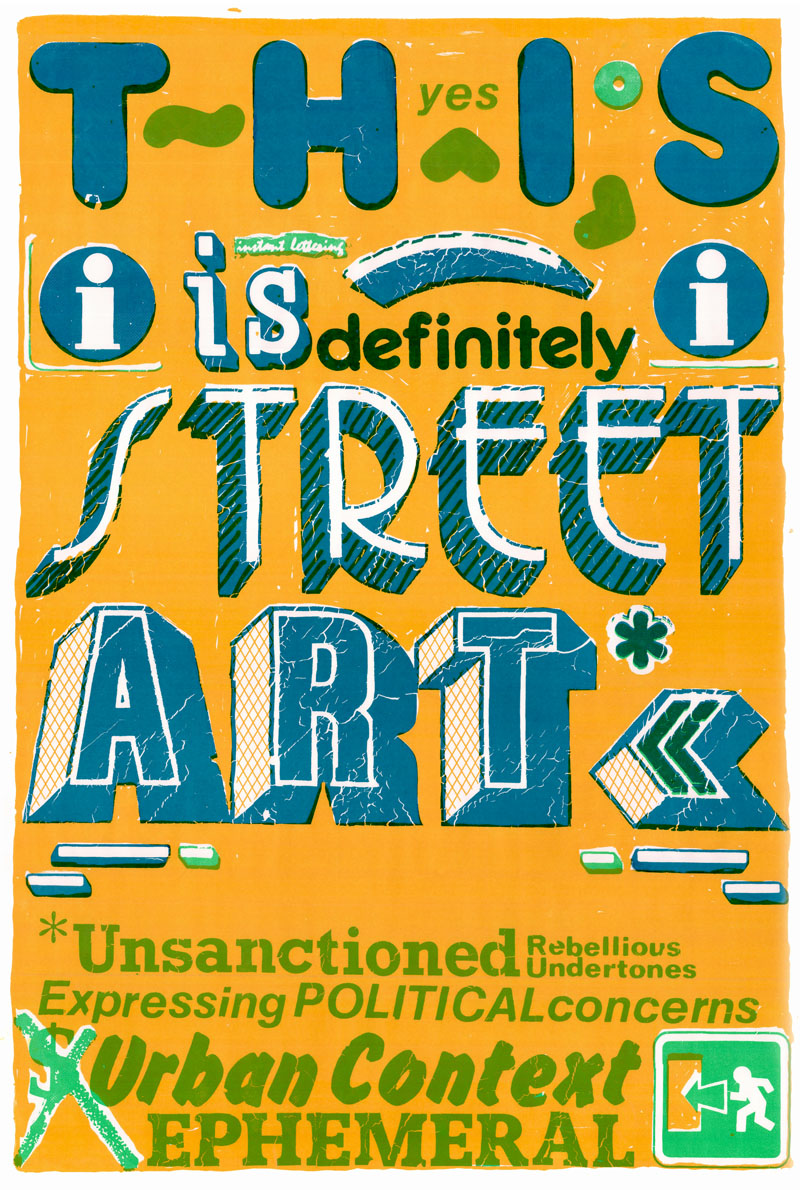 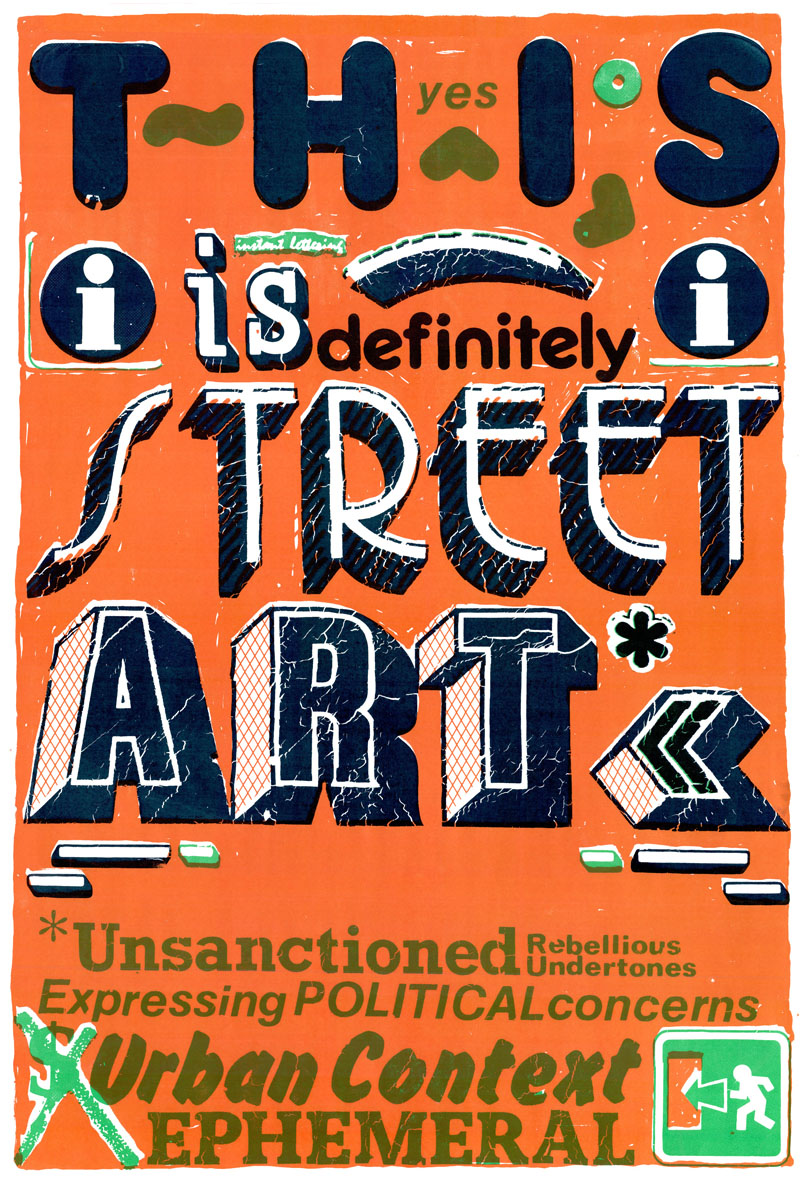 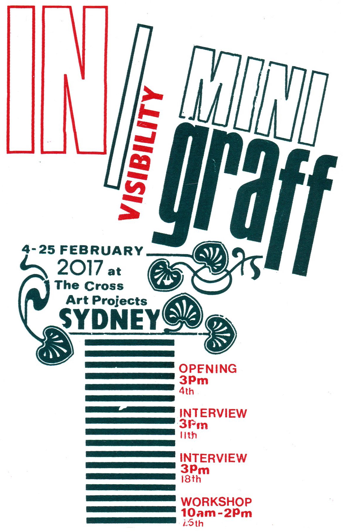 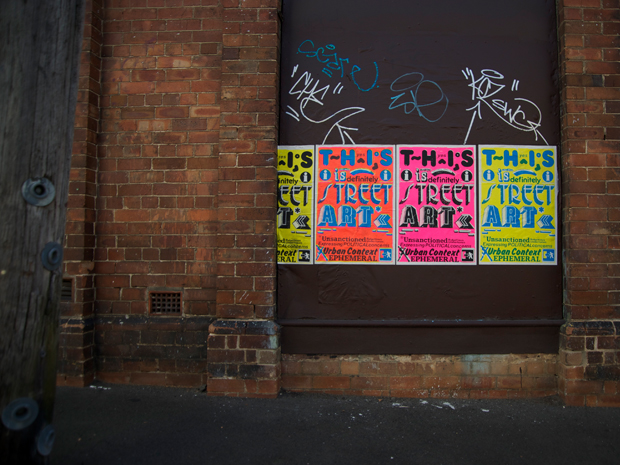 Contextual and layered, street art uses the city as an open gallery: unsanctioned and expressing rebellious undertones. This art history is unauthorised, its artists known as anon or Jill Posters or by an alias or persona such as Mini Graff. Yet, street artists play a vital role as a field critics: they inhabit the site of practice and are alert to the privatisation of public spaces. They practice at the sharp edges of otherwise invisible processes of homogenisation and exclusion. We register these subliminal or unexpected displays of cultural or social commentary often as art that appears in the 'wrong place' (Doherty, 2015), outside the narrative structure and prompts of the gallery and outside official art and commerce. In/Visibility is registered as a process and paradox.

Some of Mini Graff's selected 'unsanctioned' artworks are familiar friends from inner-city walls, like Mark your mark (on society), or they have been witty prompts on what is / is not public art. Edges and margins matter. Like the earlier anon Jill Posters, this is a contextual art history where rights are contested and policies hostile to street art are enforced. But our heroine will 'never give up'. In the high-visibility poster Broke, inspired by the protest scene in Wollongong and the Jobs for Women Movement (Art Resistance, 2016), a small but otherwise unbroken heroine valiantly waves a small flag. A heraldic figure for rebellious times. Recent work by Mini Graff directly address the encroachment of corporate concerns on public space (Not Commercial series) and the potential of collective action to share the future of our towns and cities (Equality series).

The first world city works to eliminate the 'wrong place', focussing on reaffirming our sense of self, reflecting back a picture of a non-threatening, grounded identity — building a world of pot plants, official public art and shopping malls. Once the walls of Sydney were alive with the handiwork of many Jill Posters. This September 2017 is the 40th anniversary of Walls sometimes speak, an exhibition of posters coordinated by Chips Mackinolty and Toni Robertson, with 14 other poster makers. A small but dynamic group of artists, including some of Australia's most interesting feminist artists, continue to interrogate public space. Like Mini Graff, they are deeply interested in conversation and telling the story of growing social imbalances in the urban situation. Parody, humor and social commentary are common themes in their work: ideas translated into experiments with scale, from discrete interventions to large scale installations, in the margins of public spaces. Mini Graff has long used a non-threatening quotidian persona, a 'mini Mini' whose work is to reclaim the streets and the traditions of street art.

Those who are literate in reading (or talking back to) walls learn to recognise an artist's visual language. Mini Graff, for example, uses hand-cut stencils transferred with aerosol pint or seriography and craft skills of Letraset and typography. Her installations range from single colour, single stencil works to multiple stencils and colours incorporating 3D elements. Depending on the installation the site, Graff also pre-prints onto paper, stickers and wallpaper – hanging them in the place of painted stencils. Graff’s work shows how a simple treatment applied to an object rendered invisible by familiarity, such as a sign post, can return it to our awareness. Conversely a sly sticker on a monument may say 'this is not public art'.

Mini Graff has participated in several public art projects including MCA Art Bar (2016 with Jason Wing and Alison Alder), MAY’S Lane and Outpost, plus presented at numerous events including 7th National Print Symposium, National Gallery of Australia  and IMPACT7 International Print Conference. The exhibition was developed as a residency at The Cross Art Projects in association with the Center for the Study of Political Graphics (CSPG) in California. See www.politicalgraphics.org/ 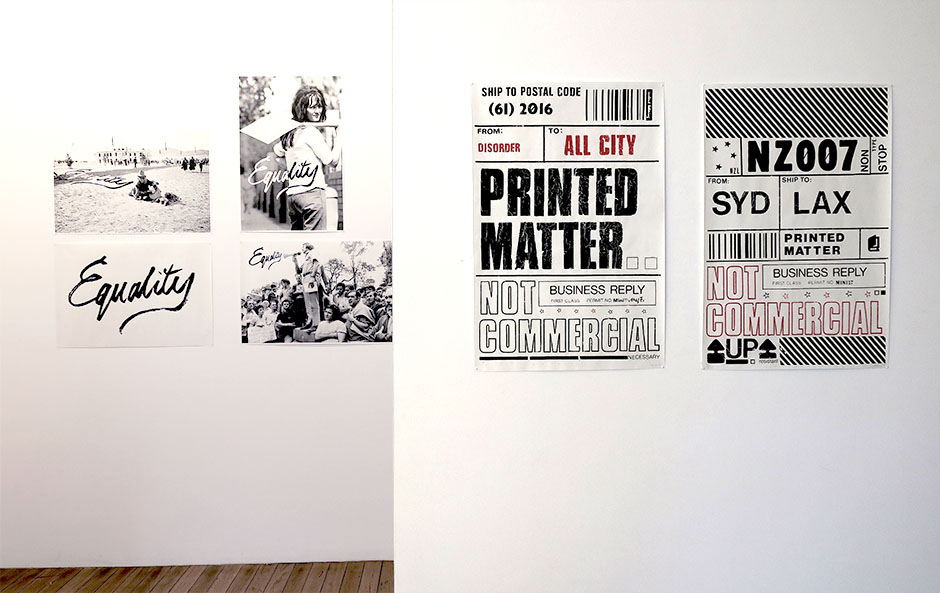 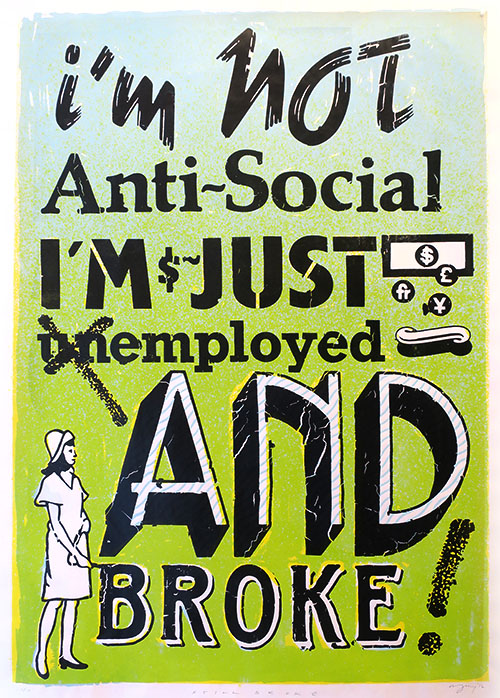 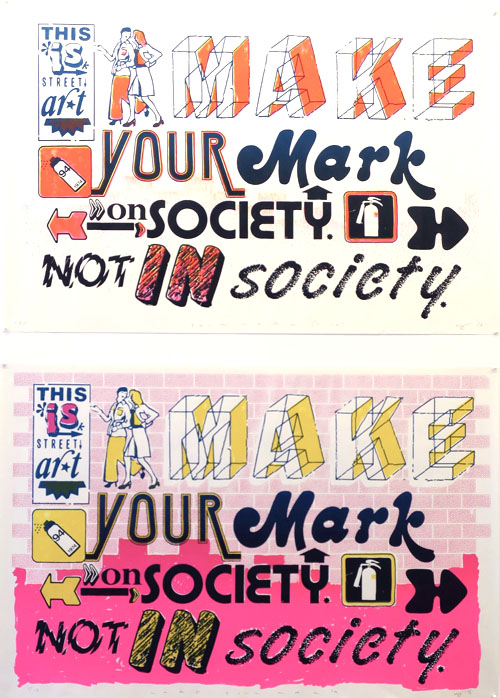 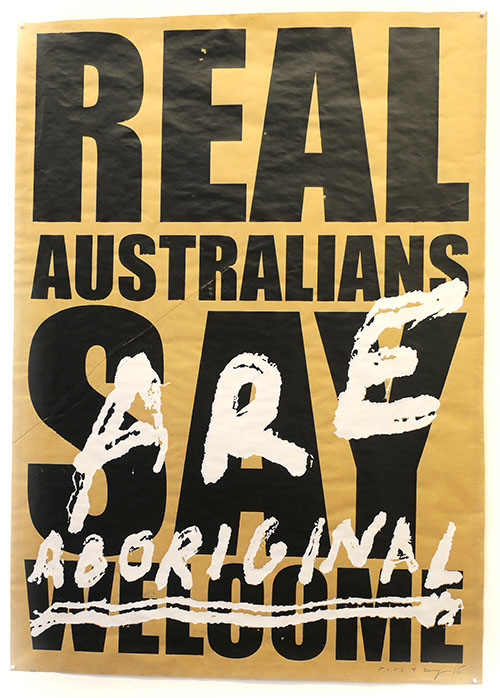 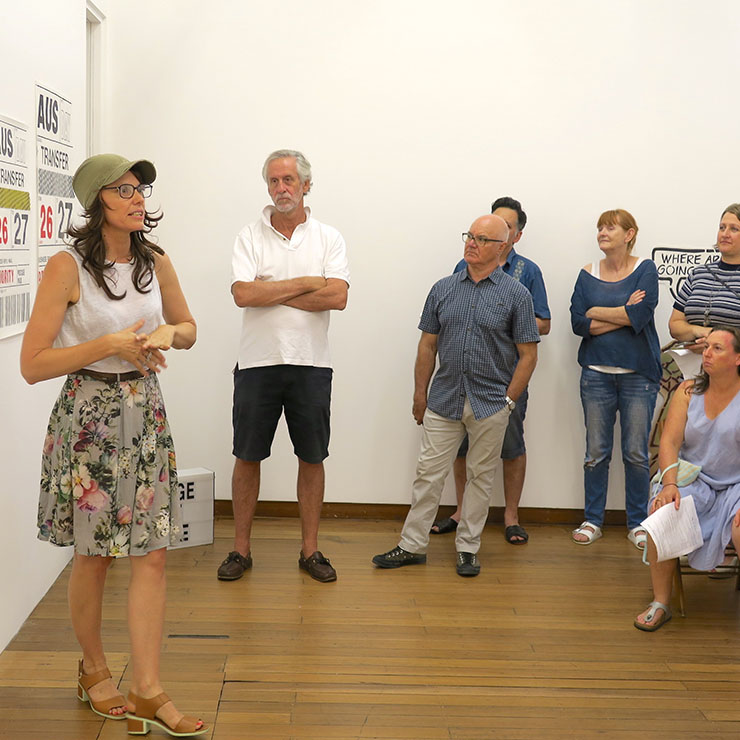 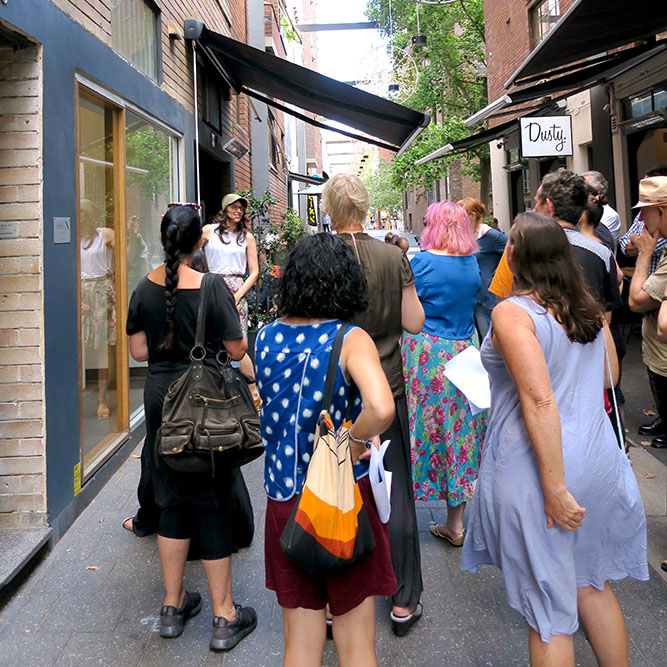 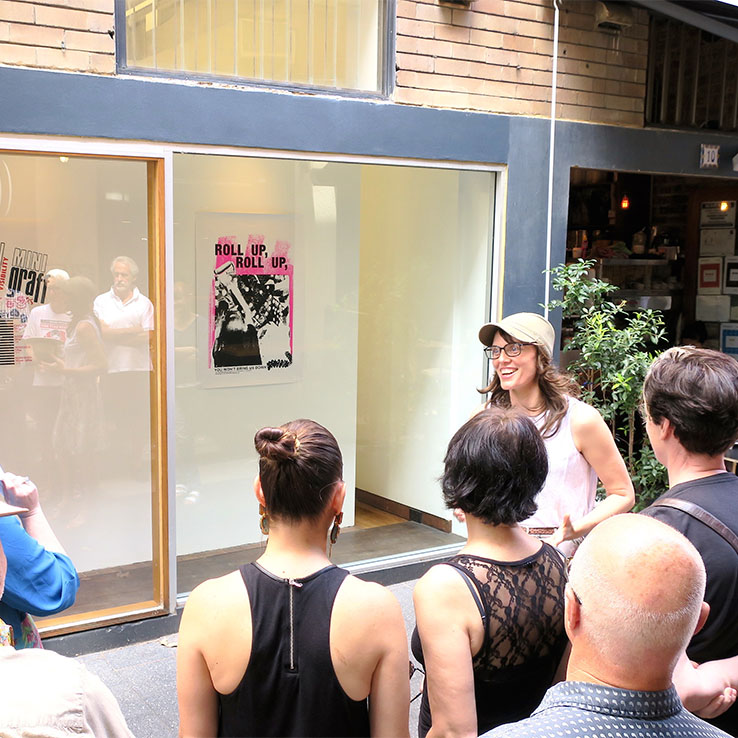 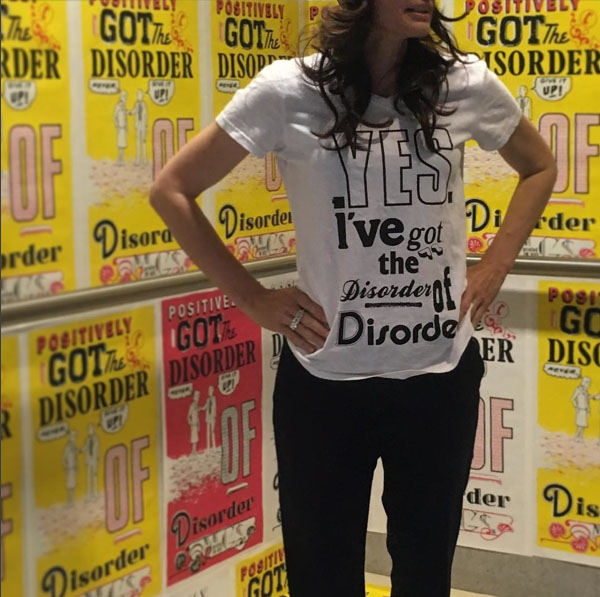 Mini Graff, I’ve got the Disorder of Disorder, 2016 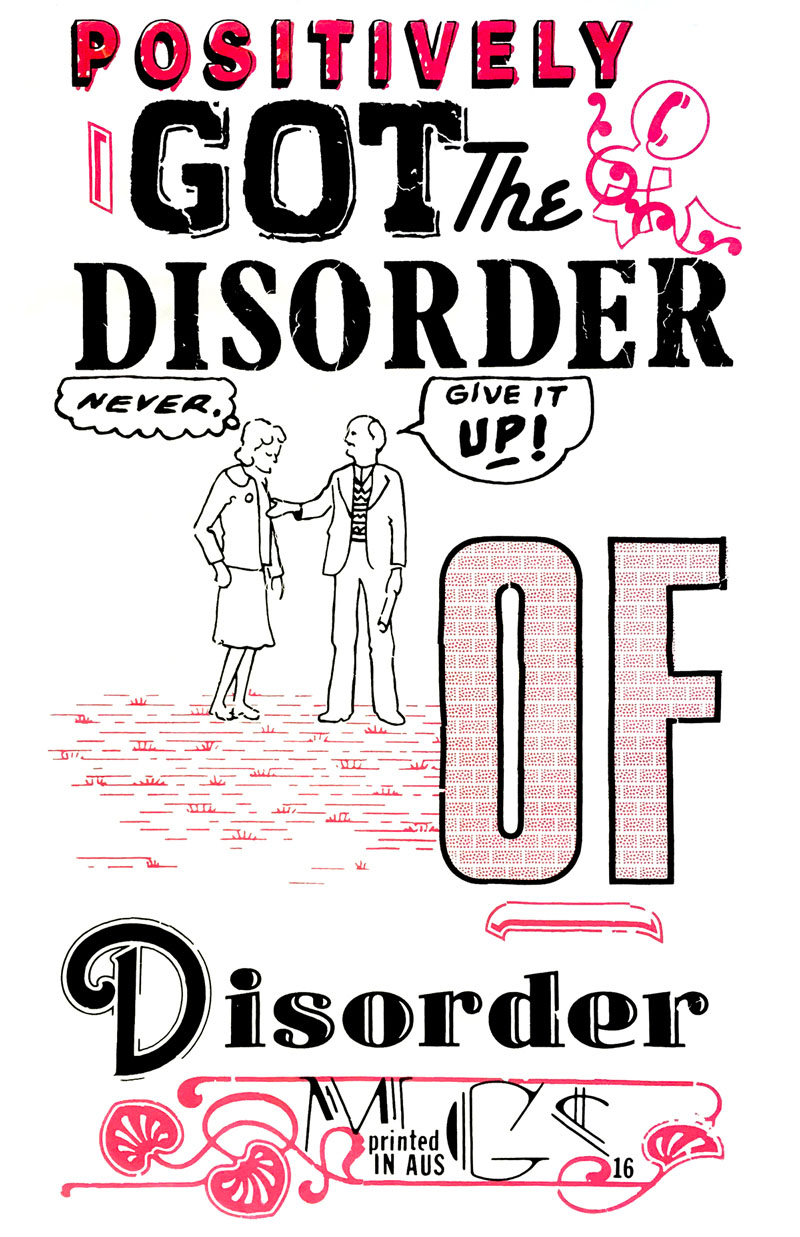 The multi-racial collective Garage Graphix (1981-1996) in outer-Western Sydney combined art production, community employment and training to voice issues of local Indigenous inequality and economic instability. These inclusive projects considered the art world as an expanded social field that operates in tandem with other institutions such as the family, school and the mass media. Garage Graphix collective worked with communities of Western Sydney on visual arts projects, graphic design and screenprinted production, producing artworks related to cultural diversity and social issues — working mostly with women’s and Aboriginal organisations on landrights, women’s and minority rights.

Lin Mountstephen was Garage Graphix’s Creative Director from 1981 until April 1996. Marla Guppy was one of the long-term artists in residence who, with Aboriginal women’s studio co-ordinator Alice Hinton-Bateup, helped develop positive visual images of Western Sydney. (Then termned 'new' suburbs and filled with people displaced from Sydney's inner-city.) Garage Graphix generated 70% of its funding from commercial and community work.

As applied to the visual arts, the ideas of the 1970s Women’s Liberation Movement aimed to foster peer situations, develop women’s skills, training and also to give artists the chance to experiment and take risks. All the group’s attributions (where they appear) are by women. The Women’s Art Movement held the political idea that being a collective was a political act: making some artworks anonymous or difficult to identify. Perhaps a combination of attribution and operating in the 'pre-digital' age, means that work by Garage Graphix is rarely seen and there is not yet much written. Fortunately, last year, curator  Kon Gouriotis included some prints in a show called Its our thing’ at Blacktown Art Centre. 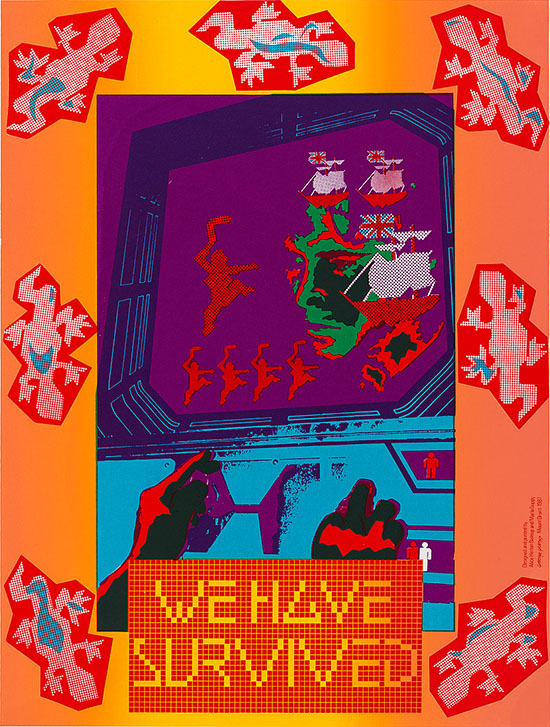 Marla Guppy and Alice Hinton-Bateup, We have survived, 1987. Garage Graphix 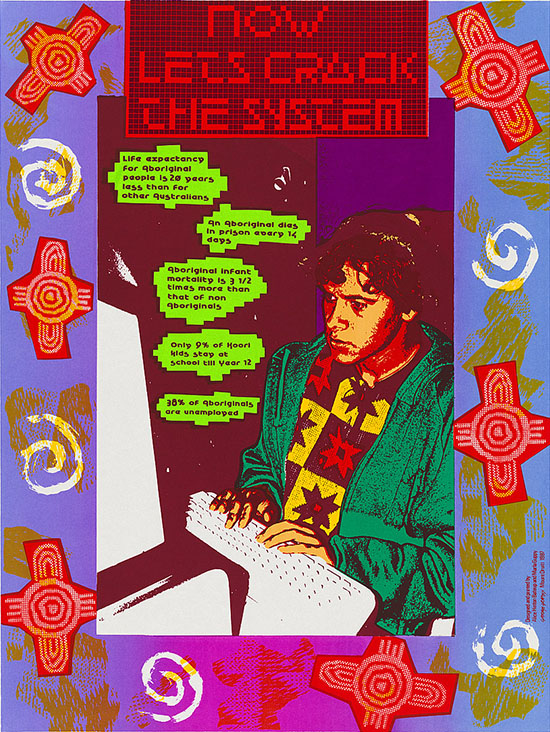 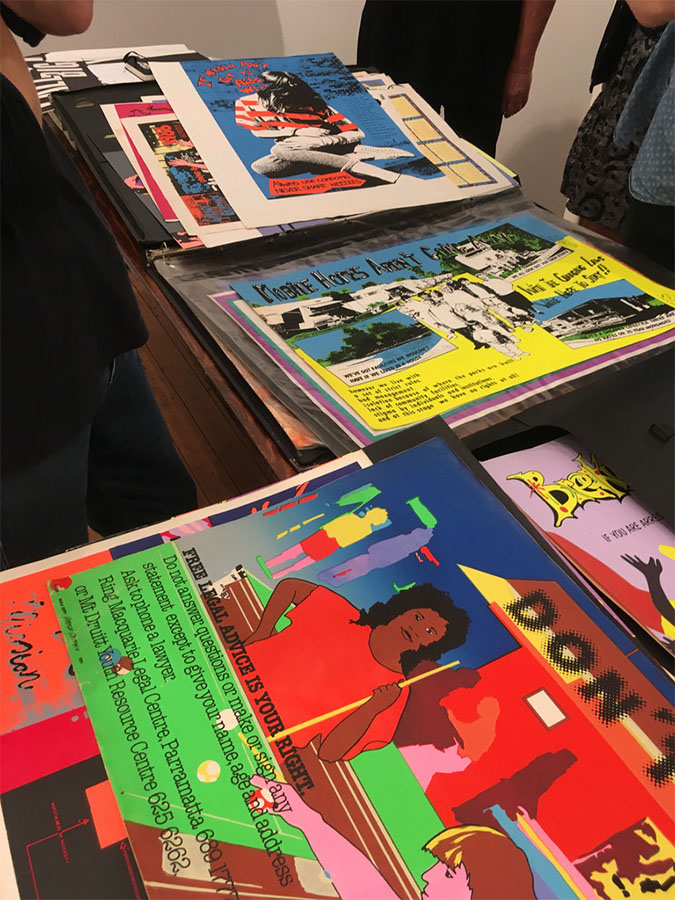 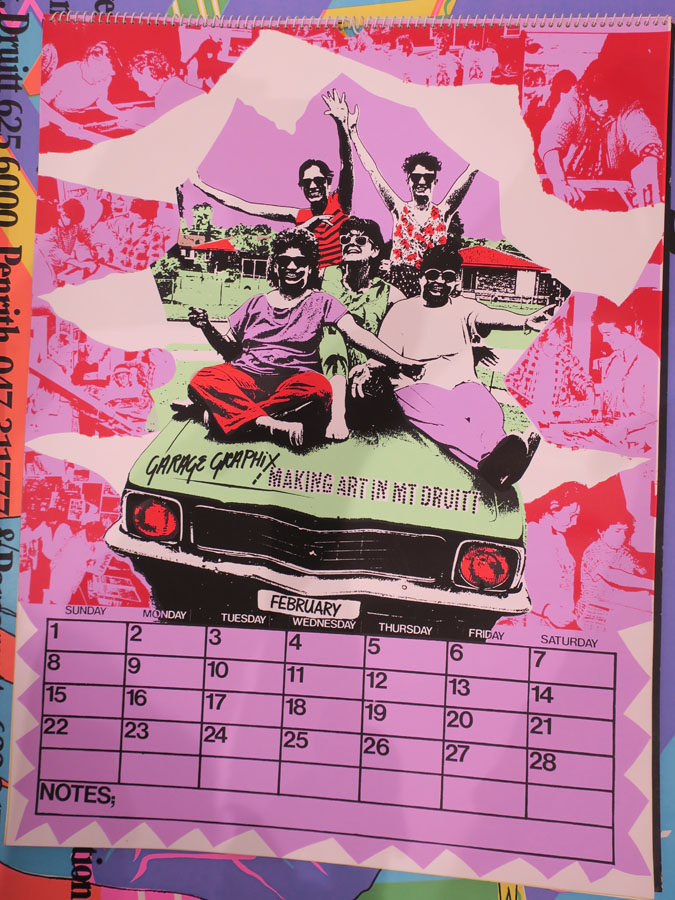 Jacqueline Millner, Visual Poetics: the critical impulse in street art from Paris to Melbourne’, The International Journal of the Arts in Society, Vol 4 No 3, 2009, 303-320, 2009

The Center for the Study of Political Graphics (CSPG) is an expansive visual art resource and historical archive located in Los Angeles, California. www.politicalgraphics.org/'