This exhibition of woven metal works by the late Margaret Grafton looks at her work and ideas but also the challenges she set, not only to contemporary Australian tapestry practice but art making and public art generally.

Margaret Grafton was renowned for her innovative approach to tapestry making and in particular weavings that interpreted spaces in public buildings designed by leading Sydney architects such as Andrew Andersons, Philip Cox and Peter Johnson. Her return to weaving with metal came twenty-five years after the censoring of a State heraldic tapestry in 1975. Art historian Daniel Thomas wrote of this work: '… the silver lightness of the weaving emanates beneficent friendliness, suitably embodying the institute of law and justice'. Nonetheless, the work was controversially taken down, re-emerging seven years later in 1982 in the Newcastle Courthouse where it still hangs today.

But return she did with subversive vigour, weaving aluminium and copper into various warps of wool, nylon and plastics. She used the reactive properties of metal to score, etch, sketch, alchemise with chemicals and acids (and sometimes uric acid) to gain her surface effects, appropriately terming these new works ‘deviations’. The play of texture and light on these magical works ally the archaic, the personal, the political and, crucially, the porous divide between these categories.

Philosophy became a strong influence on Margaret Grafton, not merely as a discipline of inquiry but in her life as a weaver, completing a doctorate in the philosophy of deconstruction and difference in the late 1990s. Whether it is a wall-sized heraldic tapestry or a variegated metal weaving, each strand and strip of her work links not only with the ancient history of tapestry making she thoughtfully and passionately evoked, but also with a radicality of our time.

Margaret Grafton is a rare combination: artist, activist and philosopher who lived and championed divergent tangents. She lived difference. She wrote shortly before her death in 2004:

'As I weave the metal forms take on their own positivities and sculptural shape (with the glint of metal and the occasional cut finger) rather than soft and folding woollen tapestry. The grid of woven metal belies the concept-driven artwork; the rationality emboldened here is that of an ancient and complex skill, a medium of technological sophistication and a labour-intensive construction. The aluminium weave retains its glitter through the generations whereas the copper weave, with the action of time upon it, will gradually change from a lustre to a crystallised finish — verdigris — green.' 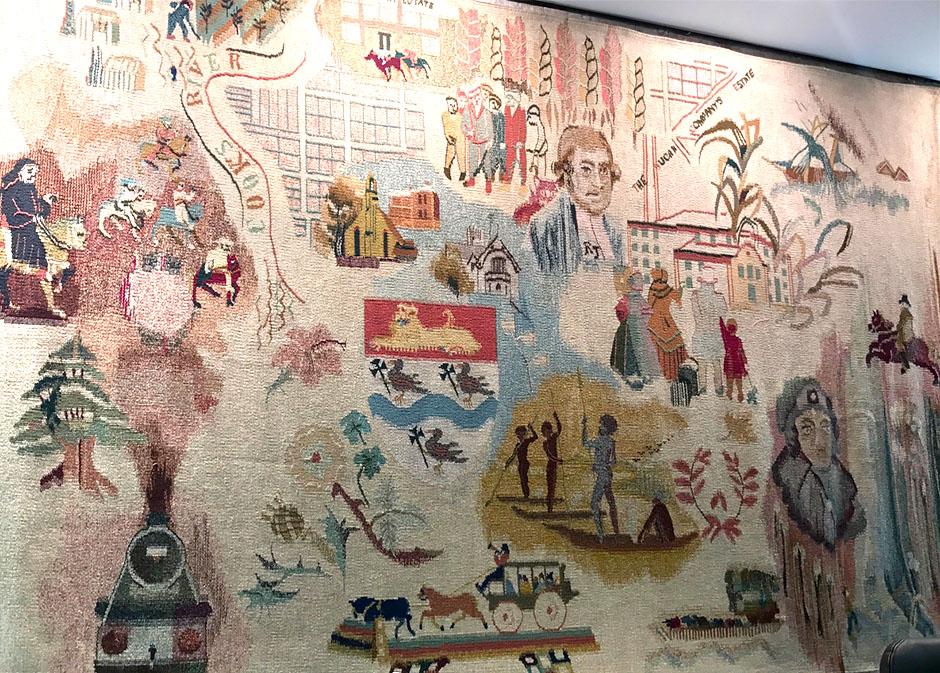 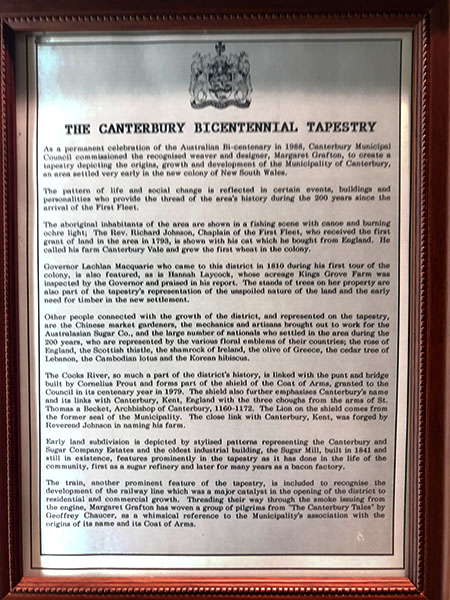 Margaret Grafton (1930–2004) was born in England and trained there as an artist, later working in theatre and set design with her husband Dennis Grafton before migrating in 1955. She established her Darlinghurst studio in 1963 and worked on major public works commissions for law courts, hospitals, city councils and NSW Parliament until the late 1980s.

From the outset Grafton’s practice was experimental in design and technique, well suited to the challenge of the ‘image weaver’ in an architectural project to develop an original interpretation of site, context and subject. She worked closely with architects Philip Cox, Andrew Andersons and Peter Johnson, and it was Grafton’s crucial working philosophy to create an original tapestry, from concept to finished article. Her first commission, and perhaps her most important work, was the Tocal Chapel tapestry which, like the building’s radical design and construction, combines modern iconography with ancient weaving techniques.

Her last large-scale narrative tapestry, like her first major work, the Tocal Tapestry, had faith and feminism as themes. The Sisters of Charity wanted to commemorate the Order’s work with women convicts and the poor. Finished in 1988, Grafton’s tapestry hangs in the foyer of St Vincent’s Hospital, Darlinghurst, in Sydney, founded and run by women as a free hospital in 1857.

With the decline of public works building and commissioning after the late 1980s, Grafton turned her energies to philosophy and was awarded her PhD from the University of Sydney in 1997. The National Gallery, state galleries and individuals collected her exhibited art weavings. As a single mother she was helped by her commissions to raise three sons. Active in the period of the Green Bans, she co-founded Darlinghurst Resident Action Group. DRAG and Residents of Woolloomooloo (ROW) remain active today.