Saturday 29 July at 2 pm: Gemma McKinnon, Barkindji woman and UNSW Law Aboriginal Fellow at the University of New South Wales and technical adviser for the Referendum Council regional dialogues, with Aboriginal (Bandjalung) art curator Djon Mundine OAM who has curated the exhibition with Jo Holder. Everyone is welcome.

A report into the Protection of Aboriginal Children from Sexual Abuse, Little Children are Sacred (Patricia Anderson and Rex Wild, 2007) was hijacked by John Howard’s Government on the eve of a Federal election. The occupation was based on a disabled Racial Discrimination Act at odds with international human rights conventions. They sent in the army, the Federal Police and doctors to ‘stabilize’ virtually every single Aboriginal community in the Northern Territory. In Central Australia, Prime Minister Howard and Minister Brough posed for photographs with troops as communities were terrorized to ‘close the gap’. They forced many communities into 99-year leases to access essential services.

The Intervention was quietly extended until 2022 despite only two of the ninety-seven recommendations in the Northern Territory government’s Report. Ten years on Pat Turner an Arrente woman currently CEO of the National Aboriginal Community Controlled Heath Organisation, said of the Intervention, “nothing has changed for the better” and the Intervention is “a complete violation of the human rights of Aboriginal people”. (ABC Radio, The Drum, Interview, 19 June 2017.) The Intervention has failed yet it continues with its key measures in place: despite over 50 damning reports into the 'widening gap', most published in the last 10 years.

The Intervention has everything to do with taking land and silencing and controlling Aboriginal people. Instead of schools, new police stations were built in community and police search and arrest powers extended leading to a surge of people in remand. Change of government changed only the occupation’s name to ‘Stronger Futures’.

Ten years later the Don Dale Royal Commission into the abuse of children in juvenile detention in the Northern Territory was called. They found that youth arrests have increased over the past decade by 1571% for Indigenous females and 224% for Indigenous males. (Royal Commission into the Protection and Detention of Children in the NT, NAAJA Submission, p. 9. Final Report November 2017.)

We are at a decisive moment. The Uluru Statement from the Heart (June 2017) presents just three recommendations as a way forward: a Voice to Parliament, treaties or the ritualised ceremony of Makaratta and constitutional reform to recognise First Nations rights and a truth commission.

The artists in the exhibition come from the Northern Territory as well as from across Australia; are Aboriginal and non-Aboriginal; and include a young former resident of Don Dale Youth Detention Centre the subject of the Royal Commission. Their works proclaim the Intervention as a thinly disguised land grab to benefit the mining and resources industry. ‘Stronger Futures’ has delivered a future that has impoverished and removed agency from Aboriginal people and their organisations, while communities struggle to sustain valued ways of life, art and culture. This independent research project tracks the brutal history of intervention into Aboriginal Sovereignty on behalf of pastoral and now mining interests.

The exhibition includes a splendid suite of watercolours by Arrente artists from Hermannsburg / Ntaria and Alice Springs carrying the legacy of Albert Namitjira. Their communities were the first occupied by Australian Army and police. The artists voice the indignities of the Intervention and their concerns relating to land rights and mining.

Mervyn Rubuntja responds to Prime Minister John Howard and Minister for Aboriginal Affairs Mal Brough attempting to take control of Aboriginal land under the guise of their 'Northern Territory emergency intervention. On his home video Mervyn Rubuntja speaks about his traditional land Ntyelkeme, about 150km northwest of Alice Springs in the Central Australian desert. “We need to stop that mining at Pine Hill station [North West MacDonnell Ranges, NT]. The wrong people are benefiting from this. We don’t want this mining there. This is a main sacred place for us not far from where they are mining, it is our Honey Ants Dreaming.”

His colleague at Iltja Ntjarra / Many Hands Arts Centre Clara Inkamala says, “We want to send strong messages through our art. Mining is ruining our land and our sacred sites. It is destroying the home of the little animals, our bush tucker and the vegetation. This damage only helps big companies to get richer and richer while the traditional owners get poorer and poorer. When I see those trucks on other people’s country it makes me sad, so we have painted this in our watercolours. Finally, we want to move back to our country, look after it and live in a good environment. This is for our kids; we’ve got to try to look after the next generation. (Source: Clara Inkamala artists in residency with Tony Albert and Timoteus Anggawan Kusno.)

Posters by Alison Alder, Chips Mackinolty, Fiona MacDonald and Jason Wing, reflect the vibrant connections between politics and printmaking. Alison Alder hones her fine wit on the BasicsCard as "the only card for when you have no choice" targeted social security payments are a ruthless form of racial targeting. Chips Mackinolty’s preposterous road sign proclaims a ‘National Emergency Next 1,347,525km’, over the vast area of the Northern Territory. He mocks the giant ‘Proscribed Area’ signs that now host great graffiti. Mackinolty’s other wicked faux road sign ‘and there’ll be NO dancing’, debunks the absurdity of centralised diktats.

The victory of the outstation and Land Rights movements of the 1970s, celebrated in Brenda L. Croft's exhibition Still in my mind (UNSW Gallery, Sydney 2017), was trampled. Photographs by Brenda L. Croft, selected from her near-iconic series ‘Signs of the Times’, capture the wry subversion as communities react to vilification - including nationally significant places such as Daguragu where the Gurindji sought the return of their traditional lands.

Miriam Charlie photographs her family's temporary housing (temporary since a cyclone in 1983). As Miriam Charlie says, ‘I am a Yanyuwa/Garrwa woman. I call it “My country, no home” because we have a Country but no home, people are living in tin shacks, in matchbox-sized houses. Even traditional owners here don’t own houses. I wanted to take these photos to show the world how my people are living. The project is not to shame them.’

Also included are several rare works arising out of the trauma of Don Dale Youth Detention Centre in Darwin. The brutalising of children in detention disturbed Australian amnesia when, in August 2016, the ABC TV's Four Corners investigated CCTV evidence of the systemic use of force and abuse of Aboriginal children in detention in juvenile detention institutions in Darwin and Alice Springs. Torture techniques shown included the image of a young man hooded and tied to a restraining chair. Spit hoods and restraint chairs, unlawful duration of solitary confinement, gassing and strip searches at whim (including of young girls), proved that governments were torturing young people in condemned adult prisons rather than educating. National outcry forced a Royal Commission into the Protection and Detention of Children.

Little children and scared, sick and Aboriginal young people are being removed from family and incarcerated at appalling rates. It is time to consider implementing the simple recommendations made by the extensive process that resulted in the 'Statement from the Heart'. For the 'proscribed communities' (there are about 75 in the NT) it has been a hard ten-years with no benefit. The poster selection by Stop the Intervention Collective Sydney attests to the dedication needed to keep the subject of human rights on the national political radar.

The artists ask 'What now?' The Uluru Statement presents a way forward: treaties or the ritualised ceremony of Makaratta and constitutional reform to recognise First Nations rights. As Australia's presence at the Venice Biennial proves again and again, a strong Indigenous cultural base is Australia's greatest resource. 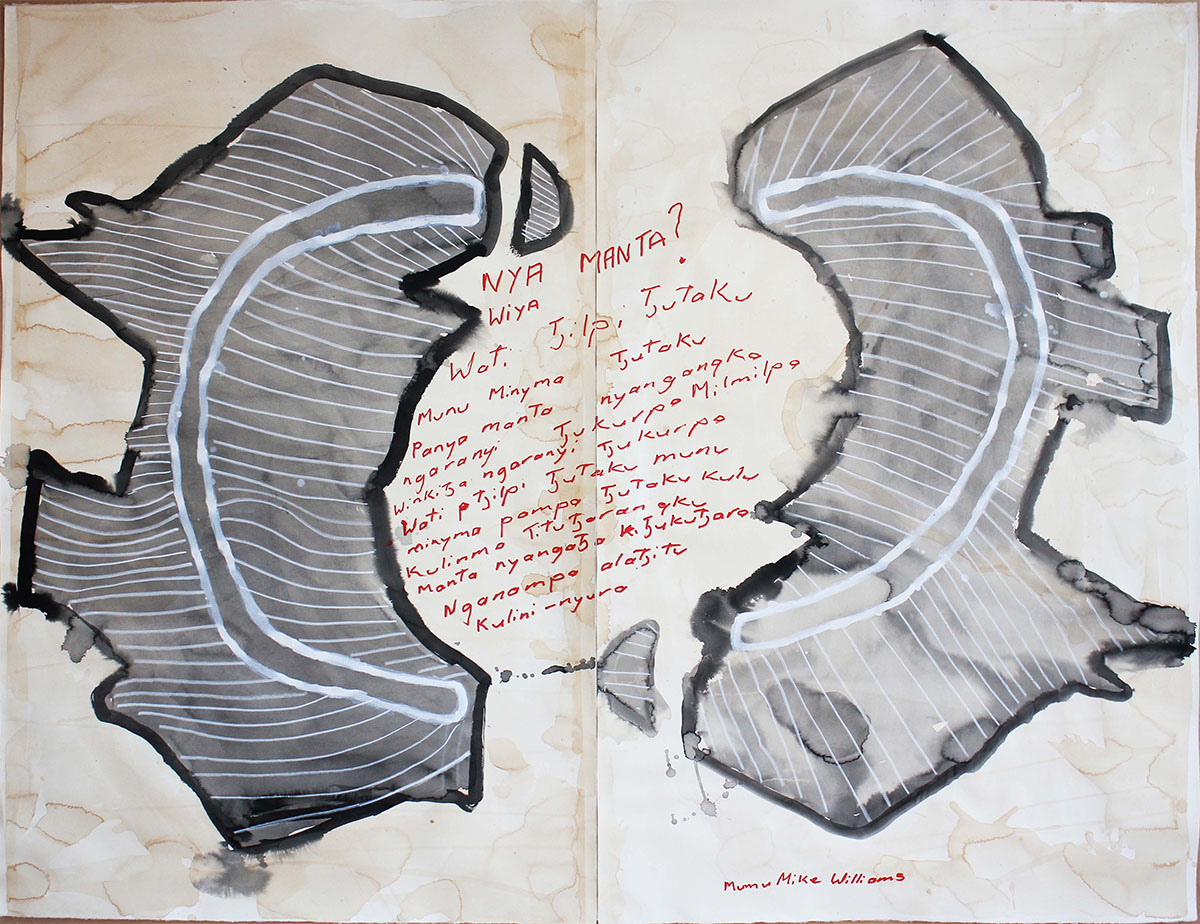 With this painting, I’m talking about land rights, and what the Land Rights Act means for us. I’m saying: 'Nya manta? What is land rights? All the old men and women here on these lands, they’re the owners of the Tjukurpa, their law and culture, their heritage. This land belongs to them. Listen: keep the land and its stories strong! Protect it and keep it strong for us — for everybody'.

This is the second in a series of exhibitions at The Cross Art Projects that witness and discuss The Intervention and Australia’s ongoing human rights abuse. The first exhibition Ghost Citizens: Witnessing the Intervention, was presented in 2012 to coincide with the Sydney Biennale. (See links and Exhibitions Bibliography below.) Some of the original artists have been joined by a growing band of artist activists. 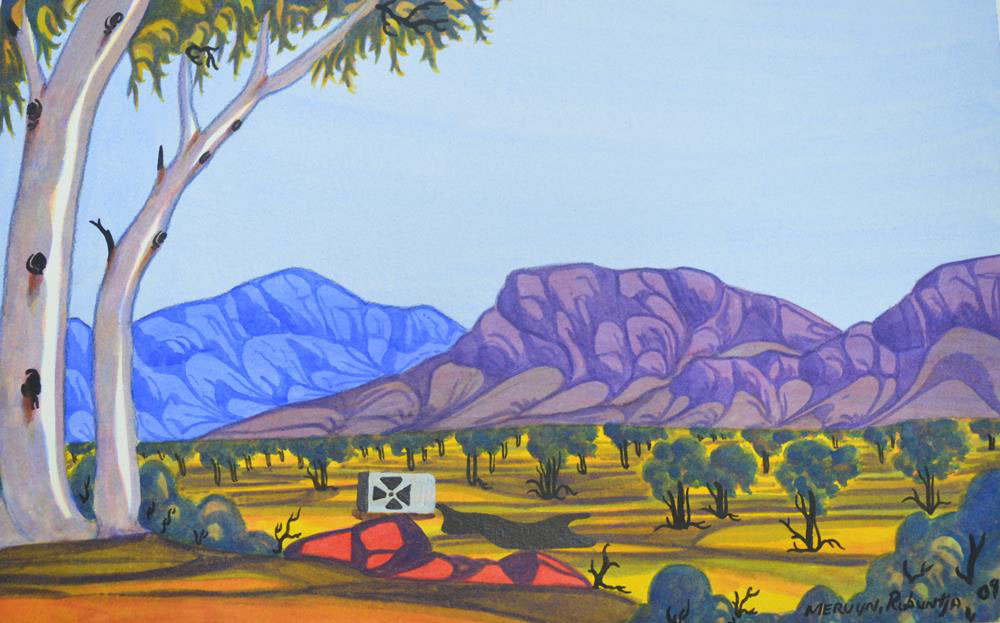 Mervyn Rubuntja, I need to put a sign – no mining! Watercolour on paper, 36 x 54 cm. Statement: “We need to stop that mining at Pine Hill station [North West MacDonnell Ranges, NT]. The wrong people are benefiting from this. We don’t want this mining there. This is a main sacred place for us not far from where they are mining, it is our Honey Ants Dreaming.” 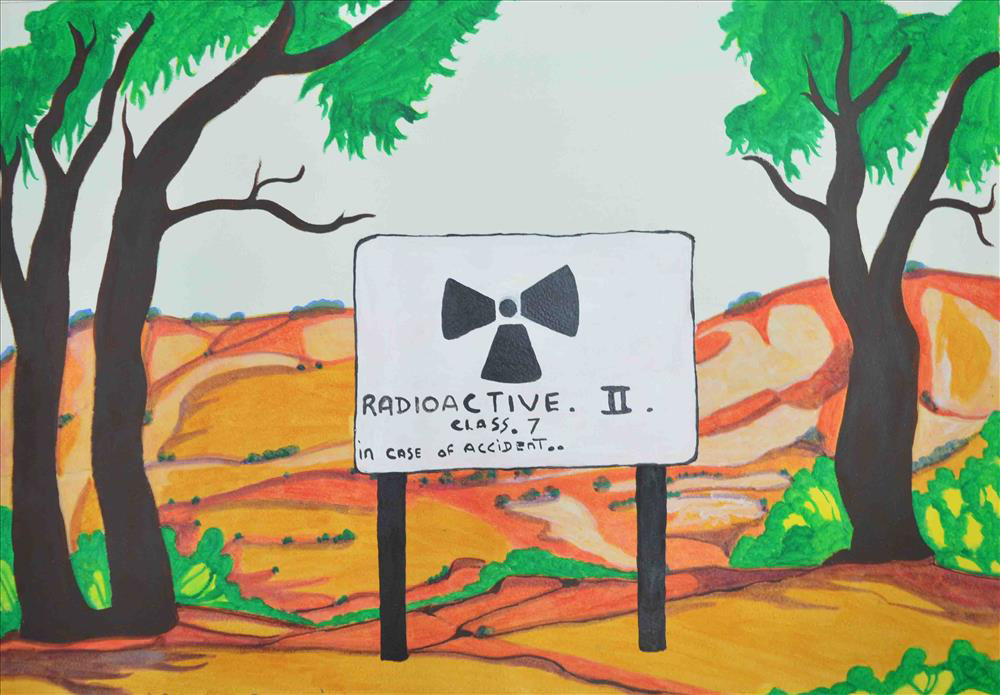 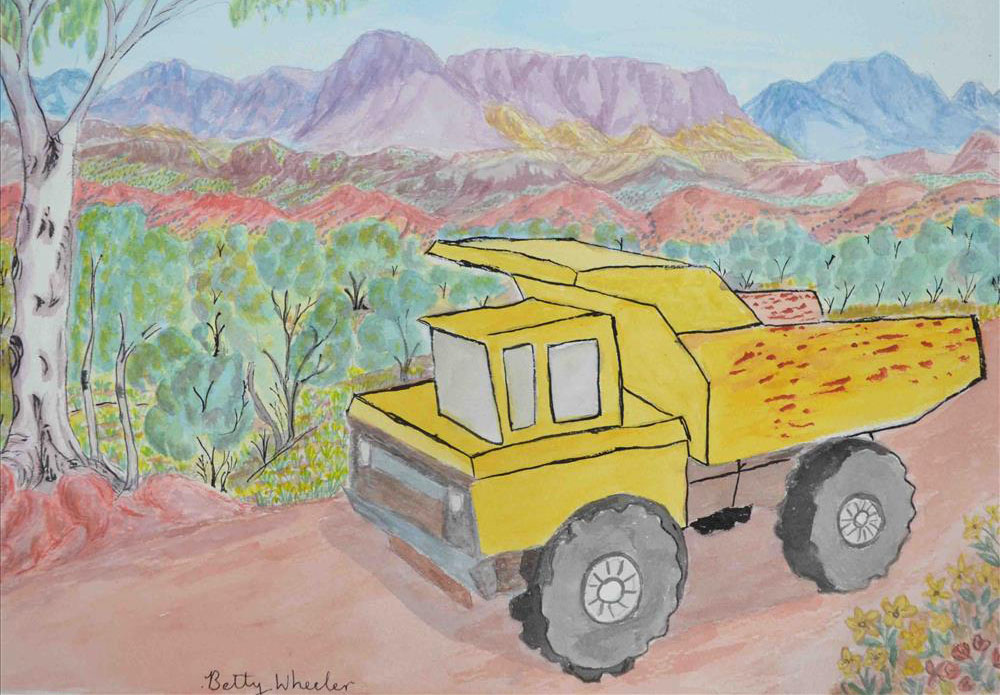 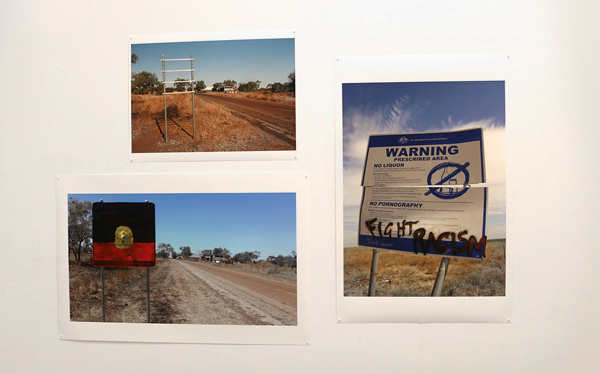 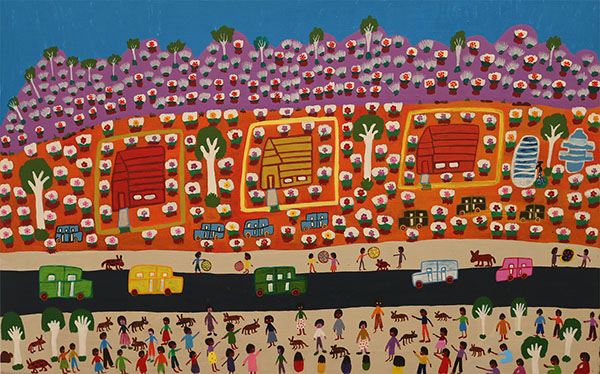 Margaret Nampitjinpa Boko, Central Land Council Meeting, M’Bunghara, 2016. Acrylic on canvas, 770 x 1220. (#07493-16). Artist's statement: This painting is about a Central Land Council meeting at M'Bunghara Outstation about Native Title. There's lots of people - families - kids playing basketball. All the papa [dogs], hanging round, playing. They listening to the white people talking about the Native Title we got over all of Glen Helen Station. That's where M'Bunghara is. Family all got Native Title. This is all my family. Courtesy Tangentyere Artists. 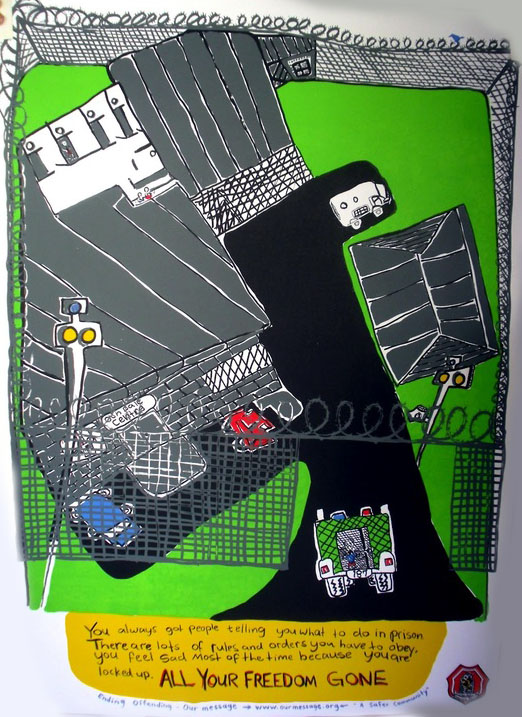 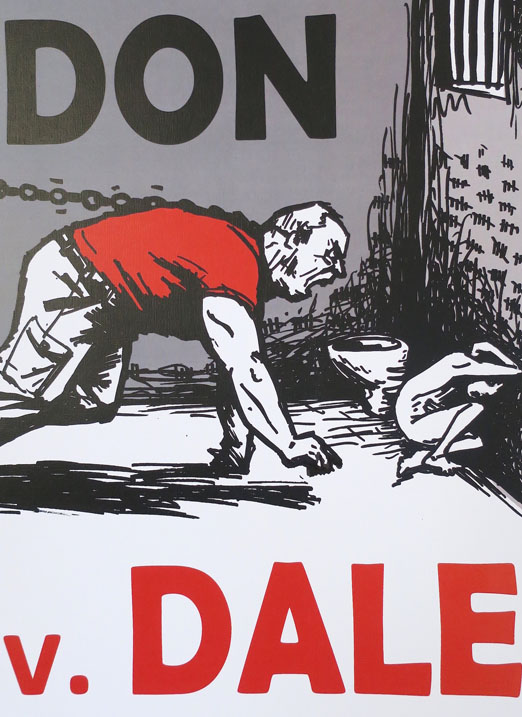 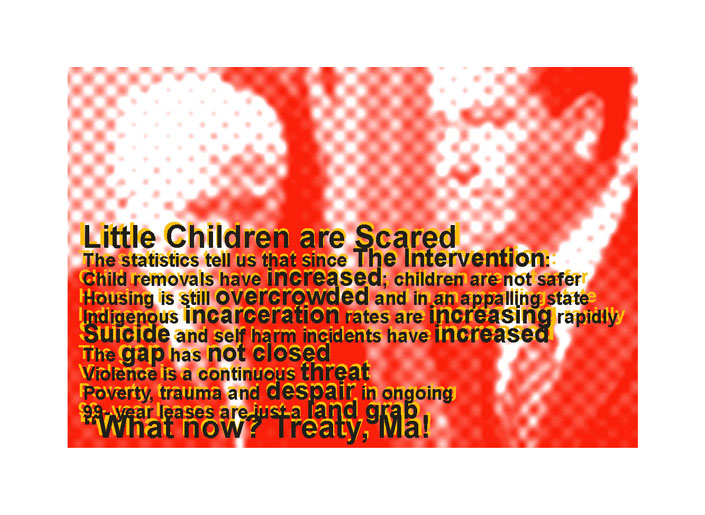 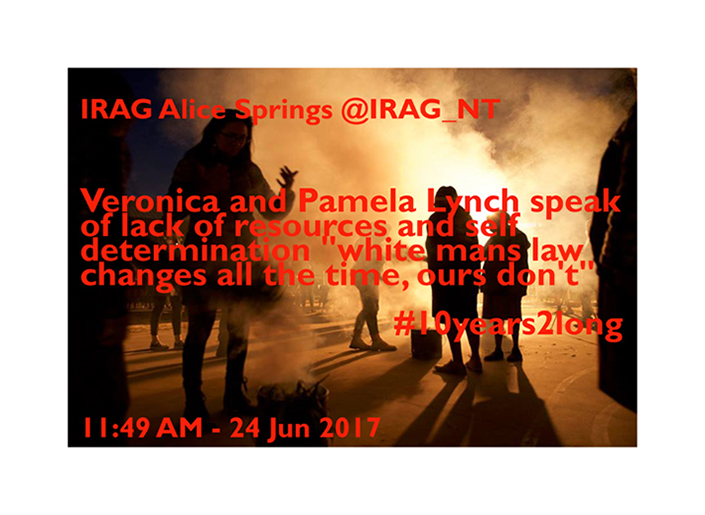 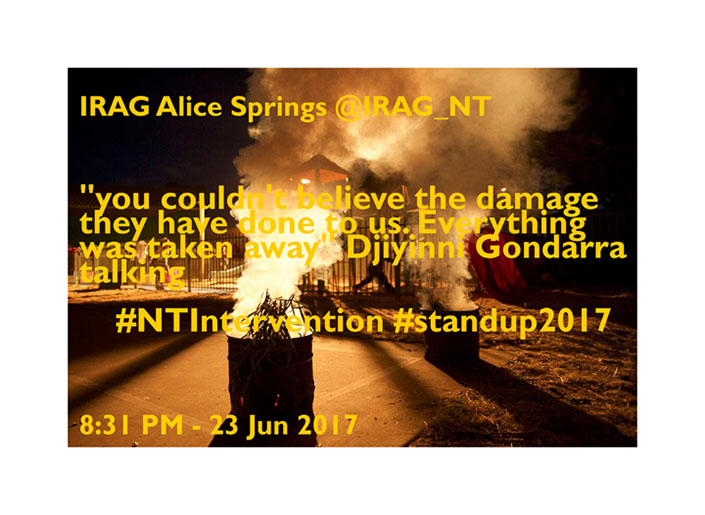 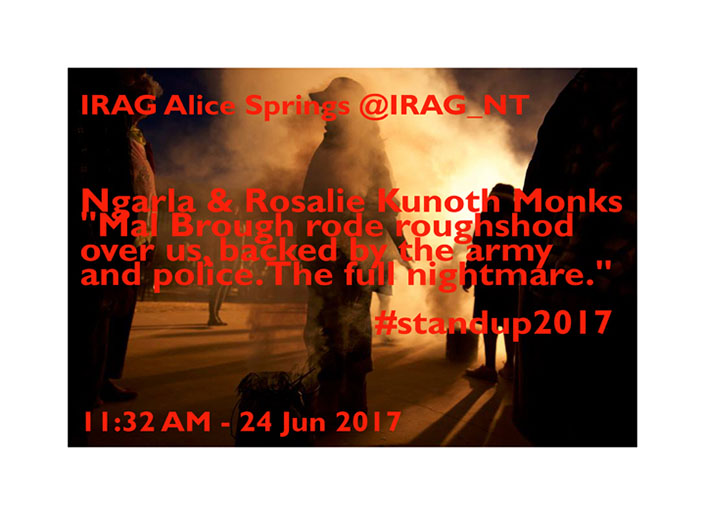 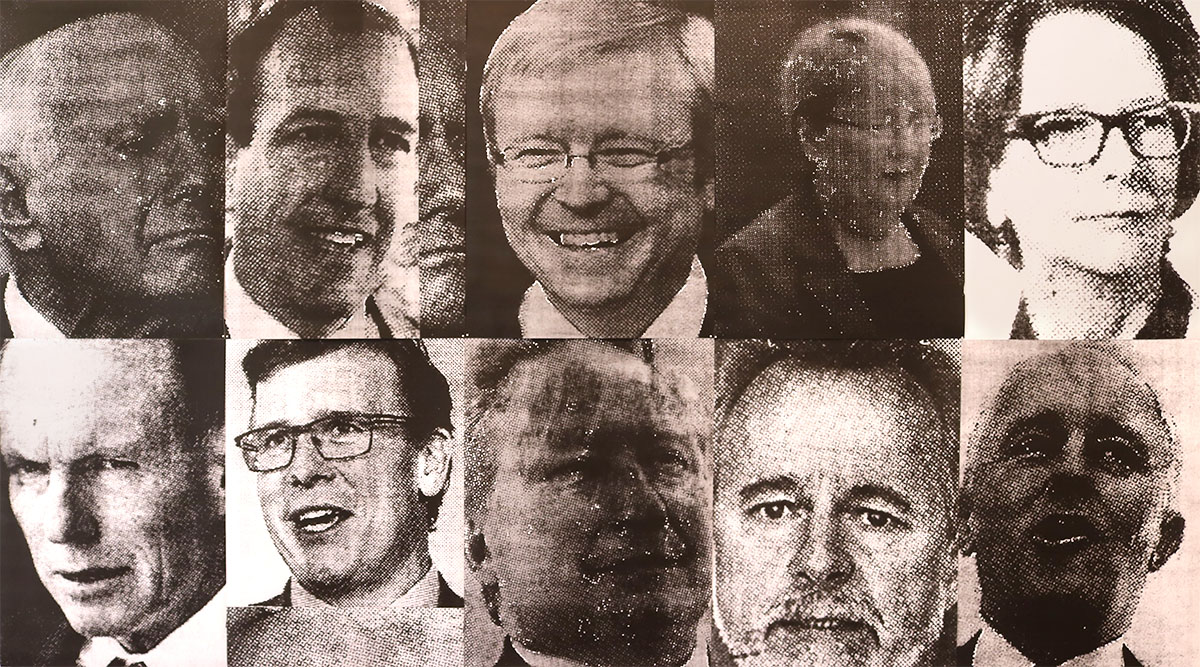 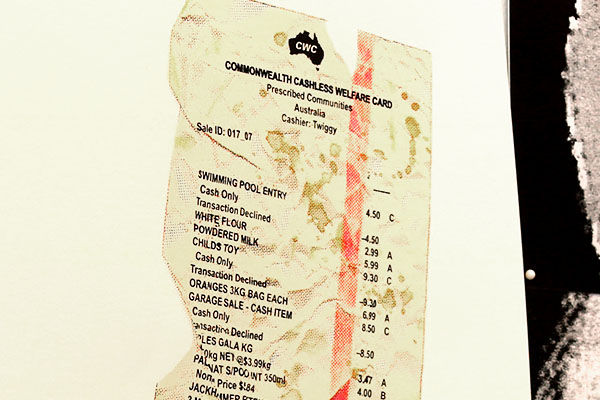 Alison Alder, The only card for when you have no choice, 2017 (detail). Unframed silkscreen print. Courtesy The Cross Art Projects. 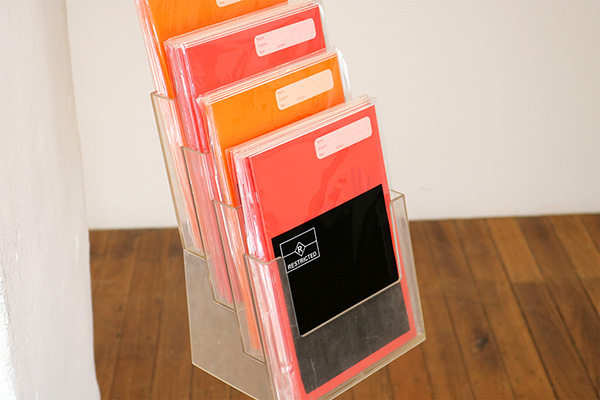 Black Label stems from a story I heard activist and artist Chips Mackinolty recounting on radio. At the time he had a friend who was living in Katherine when the intervention was first enforced. She had gone to the newsagent to buy her granddaughter exercise books, pens and newspapers for school, but her Basics Card purchase was rejected because the store also sold pornography and lottery tickets. After hearing Chips’ story I discovered many other incidences that were alarmingly similar; stories where Aboriginal people had been refused access to essential products and services since the intervention was first enacted. This pernicious censorship disempowers communities, and further demonises Indigenous people.

We acknowledge and respect all Traditional Owners & Custodians on whose Lands we live, work and travel through, in Australia and overseas.

Intervention resource and analysis including time lines at https://www.creativespirits.info/aboriginalculture/politics/northern-territory-emergency-response-intervention#toc6

Mervyn Rubuntja, 2007: speaks about his traditional land- Ntyelkeme, about 150km northwest of Alice Springs in the Central Australian desert. He responds to Prime Minister John Howard and Minister for Aboriginal Affairs Mal Brough attempting to take control of Aboriginal land under the guise of their so called 'Northern Territory emergency intervention. Youtube > https://youtu.be/F9oKtIauZ3o

Australian Museum on Social Justice including on Deaths in Custody RC https://australianmuseum.net.au/indigenous-australia-social-justice

On Ten Years of the NT Intervention

ABC Radio, The Drum, Interview, 19 June 2017: Pat Turner, NT Intervention – “nothing has changed for the better”; the Intervention is “a complete violation of the human rights of Aboriginal people”: at ABC: http://www.abc.net.au/worldtoday/content/2016/s4687879.htm  Related: https://www.theguardian.com/australia-news/2017/jun/19/child-protection-cases-more-than-doubled-after-nt-intervention-inquiry-told

SBS, NITV, 18 June 2017: 'Ten years of the NT Intervention - Voices from the Frontline'. On June 21 2007, the Racial Discrimination Act was suspended to allow the Northern Territory Response Act 2007 a controversial move that still effects communities in the Northern Territory. At http://www.sbs.com.au/nitv/article/2017/06/18/ten-years-nt-intervention-ten-testimonies-grass-roots

Bibliography of Exhibitions on The Intervention and considering the 50th Anniversary of the Referendum granting Indigenous peoples the right to be counted as Australian.

Reviews: A Widening Gap: The Intervention, 10 Years On

Unravelling Our Past: Four Exhibitions to See in July. Probing history to pose important questions about Australia's future by Sammy Preston > Download as pdf 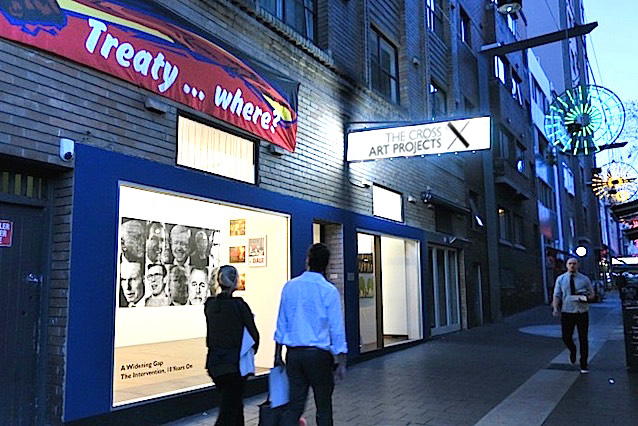 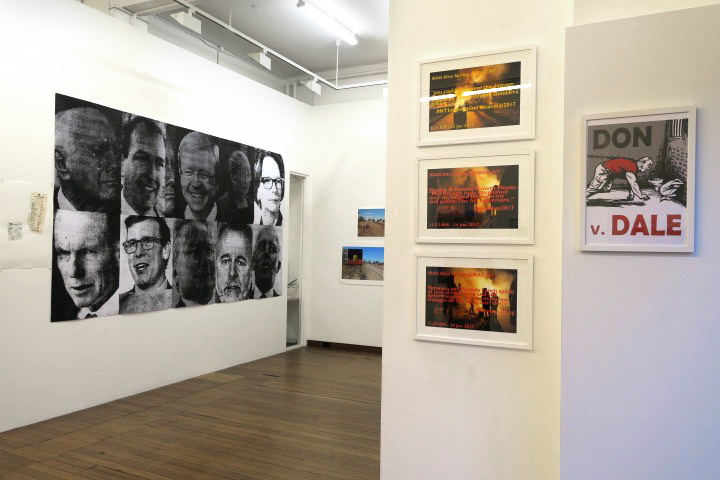