A notation as a noun is a collection of related symbols that are each given a meaning and placed within a field of study or domain of knowledge. In the exhibition notation serves as a verb: to note, mark, or set down in a system of notation. The exhibition Notation brings together Debra Dawes, artists from Numbulwar and Paula Savage who work respectively in regional and remote Australia. Despite the vast distance between them they share an interest in the intertwining of daily experience, place and politics and translating these notes into artworks and/or actions.

Debra Dawes lives and works in the Upper Hunter Valley (NSW) and each day witnesses the devastation of farming land into wastelands scarred by bleak open-cut coal mining, drought and lack of water and the ensuing extreme weather events. The artists working in Numbulwar on the Gulf of Carpentaria and Paula Savage lives in the Torres Strait. They observe a thousand miles of mangroves dying and witness gyres of non-degradable plastic ghost-nets that kill or slowly starve marine life. 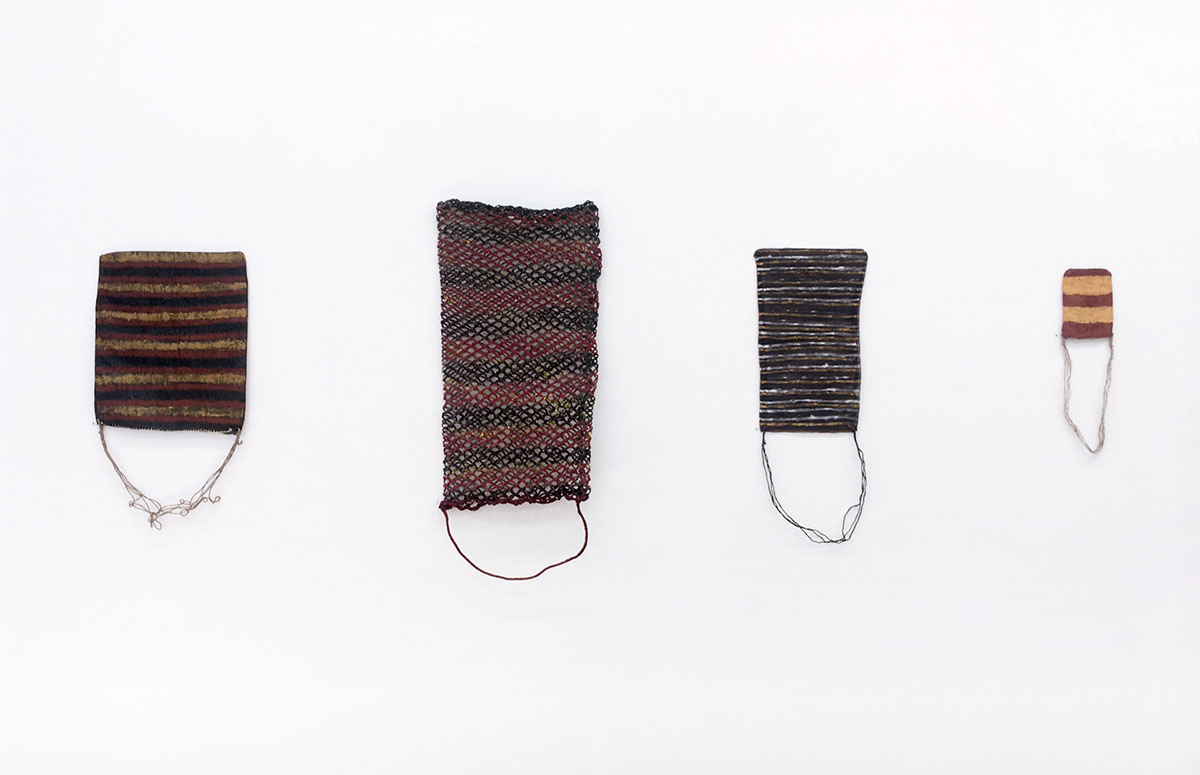 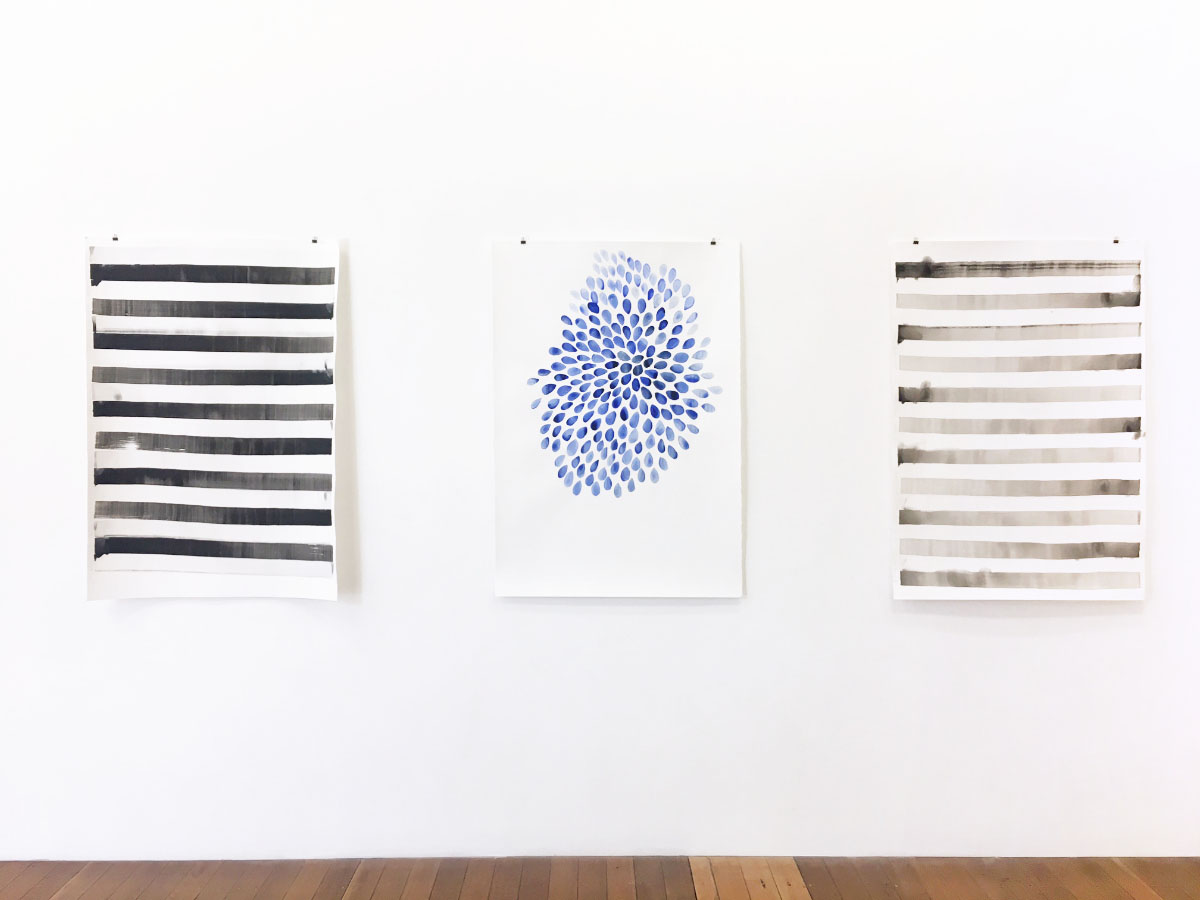 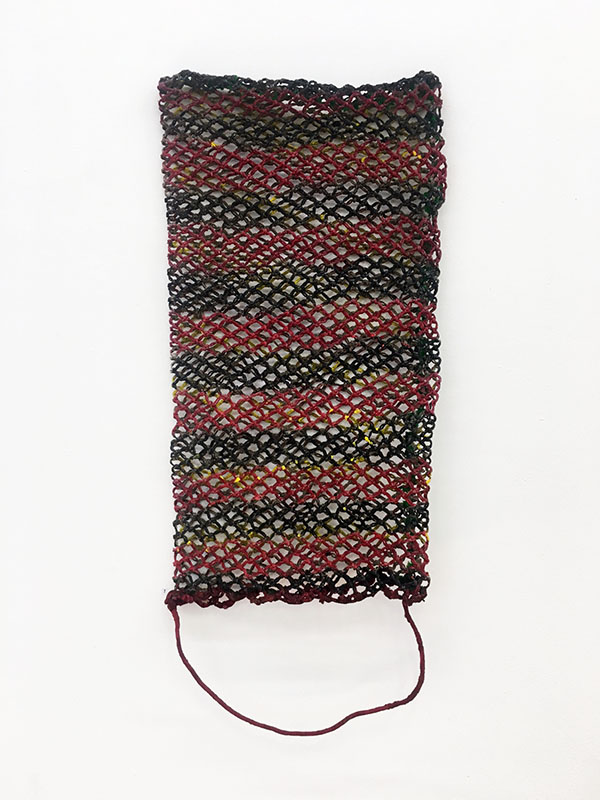 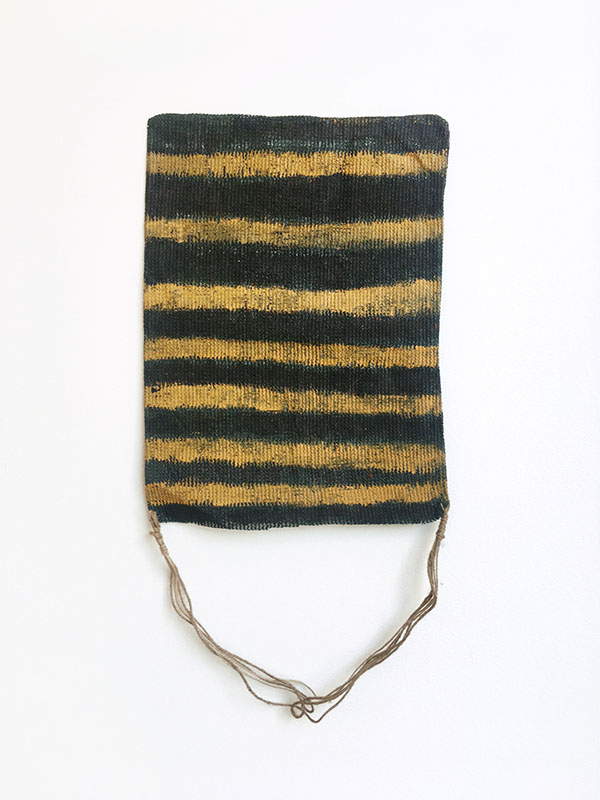 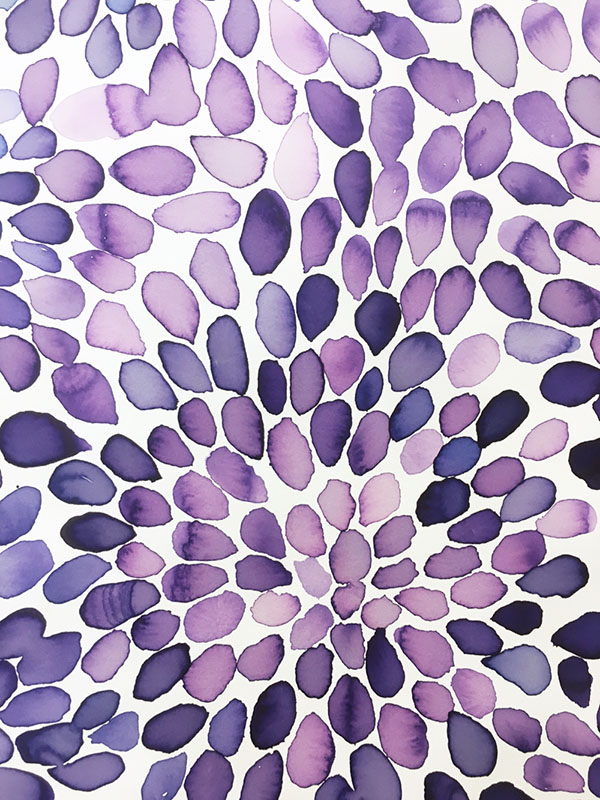 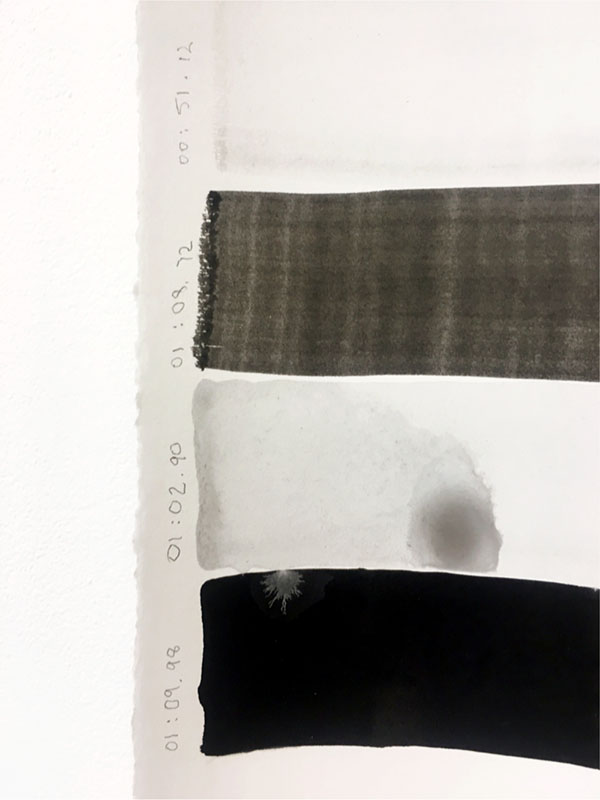 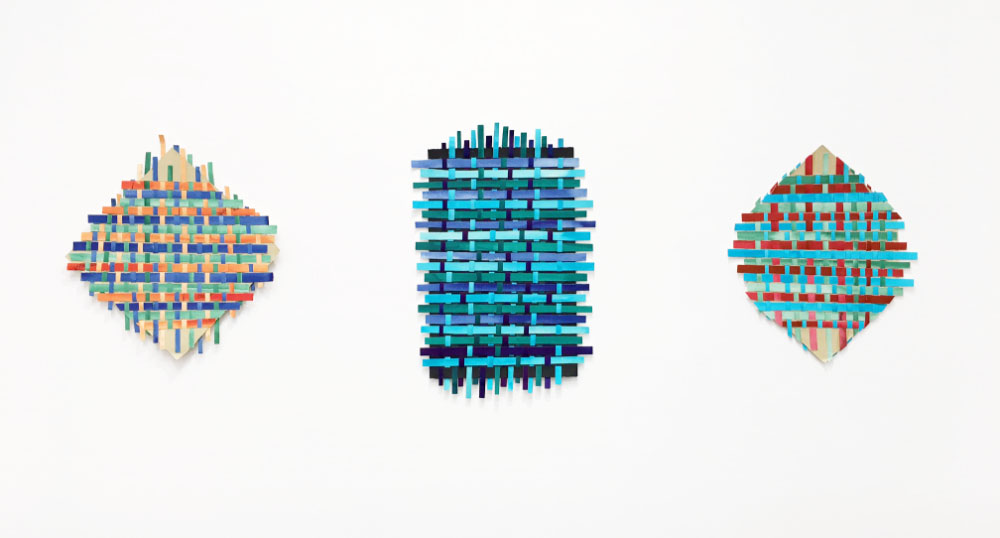 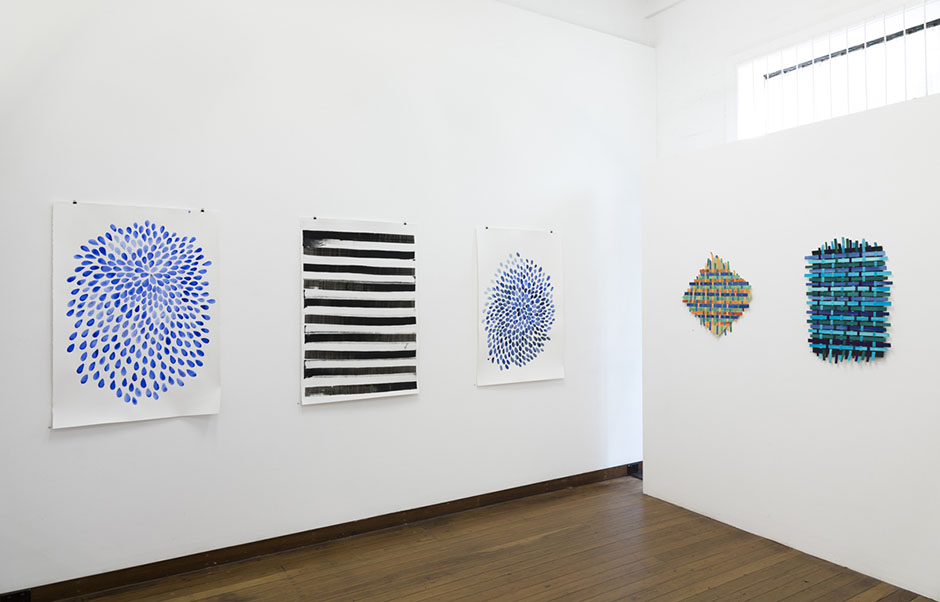 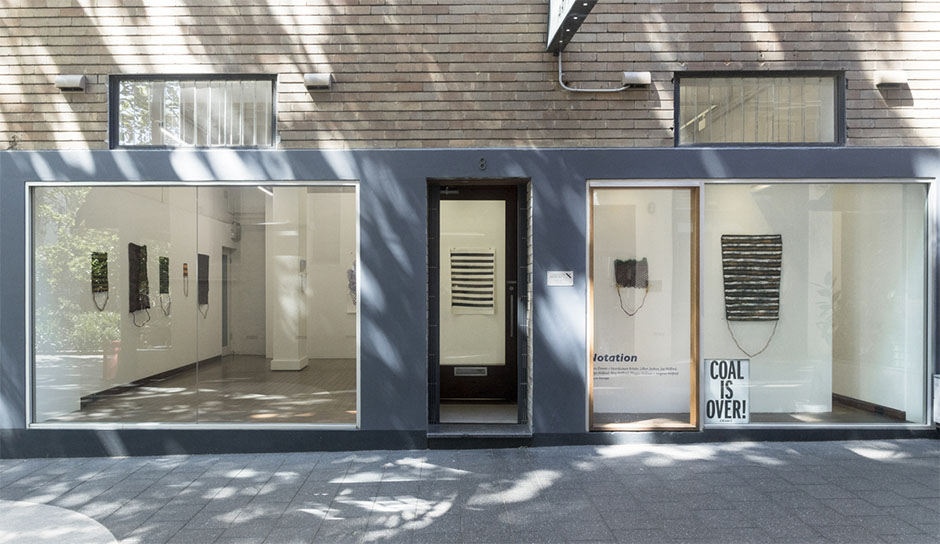 Once the Western empirical scrutiny of the landscape or seascape was thought to reveal higher moral truths, if the artist could link the understanding of natural phenomena with an imaginative response — a union of the senses and the spirit — that was akin to love. Debra Dawes comes from this conceptual tradition. Today the panorama might still be moral; but it now takes the distressed viewpoint of environmental and human wreckage.

In remote Numbulwar customary law determines the power and function of visual representations of country, maintaining distinctions between visual representations, dance, ritual, poetry, song and a ritualised use of language and law. Ancestral coastal estates extend well out into the Gulf and include the near-shore. Indigenous art has helped others (specifically non-Indigenous people) to understand how the law codifies and maps obligations to the land, sea and sky. Art is political and communal.

Numbulwar weavers use their extraordinary skills learnt from making nets, baskets, mats and spears, canoes and rope to mix traditional fibres with contemporary materials, in this case fibre from ghost nets, to produce fine-weave baskets. These artists extend the politics: the painted stripes mark the artists’ irrevocable responsibilities to place and suggest oceanic currents and power.

Both Debra Dawes and the Numbulwar artists push traditional boundaries to increase our land and sea literacy. The emerging art field called ‘Ecofeminism’ rethinks the human/object dichotomy. This leads us to accept that ‘any action is always a trans-action’ as argued by Jane Bennett (American political theorist and editor of Political Theory.) These propositions articulate a new way of experiencing the relationship between humans and their environment and is, to some extent, driven by the prospect of ecological disaster.

Debra Dawes is a noted abstract artist whose work explores the nature and form of the image in painting. In her new Notation series alternating black and white lines and bands of paint on paper creates the illusion of the near and the far horizons. They are each placed beside shape-shifting spirals of tear-shapes suggesting the possibility of renewal. Two decades ago, Dawes showed Lifting the Sky landscape paintings that oscillated in and out of focus at Sherman Galleries in Sydney. Art historian Keith Broadfoot wisely cautioned that no work by Dawes is just another extended modernist exercise. (Broadfoot followed observations by Avenel Mitchell's 'Harvest of a Quiet Eye', MPhil Thesis, 1997.) Indeed recent works are more explicit with a recent survey exhibition titled Measure (Tamworth and Wollongong Art Gallery 2017.) It is pretty clear who and what is being ‘measured’.

Over the decade, artists working in some Gulf art communities notably in the Gulf and Torres Strait (notably at Pormpuraaw Art & Culture Centre and Darnley Island Arts Centre) have made spectacular objects and sculptures from ghost nets to raise awareness of the seriousness of the plastic waste issue in oceans. For Aboriginal and Torres Strait Islander peoples, fishing forms part of the deep cultural and spiritual connection many communities have with their waters and marine resources, whether saltwater or freshwater. Fishing is a matter of cultural practice, and is informed by traditional knowledge.

Paula Savage’s experimental weaving from watercolour on paper extends her expertise as a weaver into modernist aesthetics without losing strong cultural connections and the sea surrounding her Moa Island home in Torres Strait. In the engulfing tides of plastic a quiet voice can be as effective a communicator as spectacular installations.

Now communities on both sides of the Gulf are involved through Caring for Country and Ranger programs dealing with a gyre that keeps marine debris circulating until ghost nets (usually abandoned or dumped by illegal fishers) are driven onto beaches or headlands or snagged on reefs. The impact ripples to land, coral and marine life. This is an international issue volume of plastic is vast and handling logistics and infrastructure are poor to non-existent.

Over the past two decades leading Indigenous writers and theorists (led by Djon Mundine in Saltwater, 1999 and Perkins and Fink in Papunya, 2000, both exhibition catalogues) have also articulated a new way of experiencing the relationship between humans and their environment. The sombre yet assertive ghost net paintings by Numbulwar artists and Paula Savage's glowing woven watercolours remind us that environmental degradation is a global issue. These artists lead by example.

Debra Dawes uses the formal mechanism of alternating patterns and the work of making an artwork as a way of expressing her critique of the deceptive use of language in modern politics. She is attuned to the way an image can resonate within the real world. Debra Dawes was Director of the Graduate School at Sydney College of the Arts before re-engaging with landscape (she grew up in Moree, NSW), having relocated to the Upper Hunter region of NSW, a former agricultural region now dominated by the extractive industries (coal mining).

Lilian Joshua is a strong advocate for the development of an art centre in Numbulwar. She graduated from Bachelor College (Art and Craft Certificate 2) and has visited other art centres including Injuluk Arts in Gunbalanya, East Arnhemland. Her art practice embraces multiple mediums and she works alongside her partner Ivan Ngaimi who is also a trained artist and painter. Lilian Joshua also works as a teacher’s assistant at Numbulwar.

Paula Savage’s heritage is from a clan group of Dthabugal from Moa Island and Karerege of Muralag. She studied studied visual arts and commercial arts at high school and after working in other fields, joined Ngalmun Lagau Minaral Art Centre (Moa Arts) in Kubin Community in early 2017. Her works blend her cultural heritage, cultural laws and customs with everyday Torres Strait life.

The Wilfred sisters are known for fine fibre works including weaving bags made from ghost nets (abandoned fishing nets) and other objects washed up on the coastline around Numbulwar. The woven nets are embellished by painting or enhanced with wool or shells to make new forms. Joy Wilfred (b. 1960), May Wilfred (b.1970), Jocelyn Wilfred (b. 1966), Megan Wilfred (b. 1968) and Virginia Wilfrd (b. 1971) are all sisters from two sisters. Their weaving skills have been passed down by their mothers and grandmothers. They speak Kriol, Yolgnu Matha and English. Living in Numbulwar they understand Nunggubuyu or Wubuy language but don’t speak it. The new art centre will lessen travel often between Numbulwar, Ngukurr Arts and Katherine to sell their weaving.

Self-determination is a central pillar of the Numbulwar community identity with initiatives such as the annual Numburindi Festival born out of the community’s desire to practice and engage with traditional culture. Numbulwar also has a long legacy of visual arts practice, with local artists registered with ANKA in Darwin for eight years but lacking an Art Centre despite their prolific output of weaving. Artists have had to travel to neighbouring communities to make and sell work. The development of the new art centre NNA is a huge achievement. Funded by the Numburindi Corporation Ltd – a local entity that focuses on charitable and business interests on behalf of the 12 family clan groups of Numbulwar. The Art Centre is made from two joined portable temporary housing units (dongas). Now in the planning is a woodwork studio for sculpture and carving.

The small community of Numbulwar is on the Gulf of Carpentaria has just under 700 residents. It began as Rose River or Numbulwar Mission, the fourth of five NT missions run by the Church Missionary Society. It is located at the mouth of the Rose River between Caledon Bay and the Roper River Estuary, East Coast of Arnhem Land, Northern Territory.

Debra Dawes at http://www.debradawes.com.au/
Moa Arts: Torres Strait Islander art and Aboriginal art from Moa Island in the Torres Strait at https://www.moaart.com.au
Numbulwar Numburindi Arts: a new art centre in the community of Numbulwar on the Gulf of Carpentaria in the Northern Territory: E: This email address is being protected from spambots. You need JavaScript enabled to view it. / https://www.numbulwar.com/
F: NumbulwarNumburindiArts / I: @numbulwar.numburindi.arts
Numburindi Festival September 2019 at https://artbacknt.com.au/what-we-do/indigenous-traditional-dance/numbulwar/

CLIMARTE: Arts for a Safe Climate, a not-for-profit organisation which brings artists together to use all forms of the creative arts to communicate about climate change.
Pacific Climate Warriors young people from various Pacific Island nations dedicated to take action to peacefully, with the message ‘We are not drowning, we are fighting’. https://350pacific.org/pacific-climate-warriors/