Denise Salvestro is an authority on the history of Yirrkala Print Space at Buku-Larrnngay Mulka Art Centre in Yirrkala and public programme participant in the exhibition Balnhdhurr - A Lasting Impression, a celebration of twenty years of printmaking at the studio. Curated by Yirrkala Print Space and toured by Artback NT, 2015 and ongoing.

Viewing by appointment in January.

Life on earth began in a swirling cloud of stardust. Approximately Infinite Universe considers the multiple meanings found in imaginative and traditional mappings of time, life and death. The exhibition defines the vast expanse that is not owned and connects us all.

Works by Galuma and Naminapu highlight the innovation that is possible within the strict guidelines of cultural inheritance of the Yolngu of Northeast Arnhem Land. Naminapu Maymuru-White paints the night sky and light that has been traveling for thousands, sometimes millions of years across space and time; she studies Milŋiyawuy / Milky Way or River of Stars, as a three-dimensional forest or rivers of galaxies.

Galuma Maymuru (the late) contemplates death here on earth. Both suites of work are part of the same complex mortuary and belief system that is “everywhen”. (W.E.H Stanner, 'The Dreaming', 1953). His colleague, anthropologist Howard Morphy writes: To Galuma, art is an act of memory and a process of transmission, in which she passes Manggalili law on to new generations of her clan. Equally, it is a spiritual and aesthetic exploration of her homeland.

Yolngu elders have made many dynamic adaptions over the past fifty years: unlike seasonal Makassan traders, missionaries, miners and anthropologists do not tread lightly. The cousins were instructed by the great artists Narritjin Maymuru (1922–82), Galuma’s father and Nanyin Maymuru (1918–69) Naminapu’s father to paint using Miny’tji – sacred clan designs, particularly patterns that represent family places and totems. They are, therefore, members of the famous vanguard of Yolngu women artists who expanded the shimmering presence of spiritual energy to share their elders’ cultural knowledge. This renaissance began in the mid-1970s, the early days of the Homeland Movement when Narritjin established the Mangalili homeland of Djarrakpi and Nanyin Maymuru established Baniyala on Blue Mud Bay; one of many homelands.

Naminapu Maymuru-White's 4-part print set was made for the 50th Anniversary of the Dr H C Coombs (or ‘Nugget’) ANU Creative Arts Fellowship. Narratjin was a fellow in 1978 as was Naminapu in 2014; both at the School of Art and both in Printmedia. Naminapu returned to participate as a panellist and worked with renowned silk-screen printmaker Alison Alder to make this 'Milngiyawuy' print-set in 2016. Like the major self-curated survey from Yirkalla's Print Studio titled Balnhdhurr, these artists' works are marks made as a sign for people to follow. 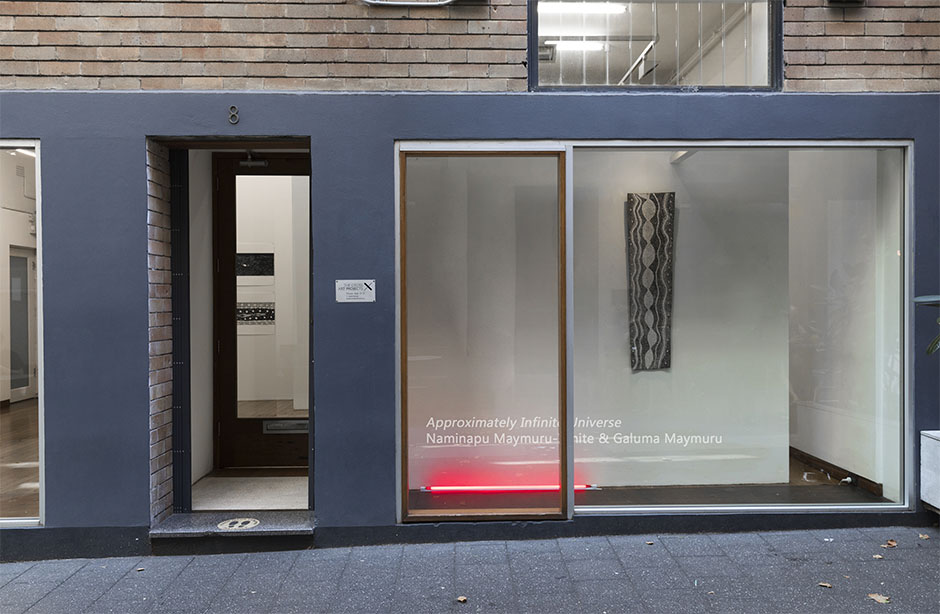 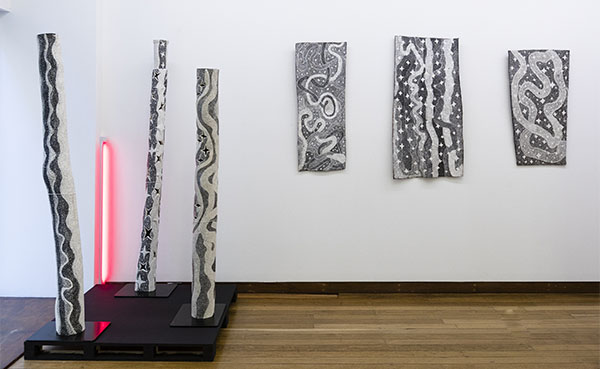 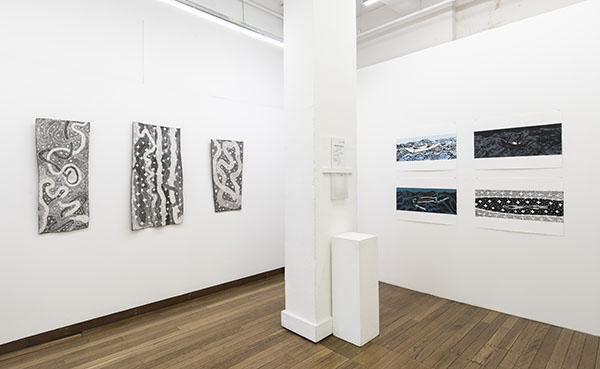 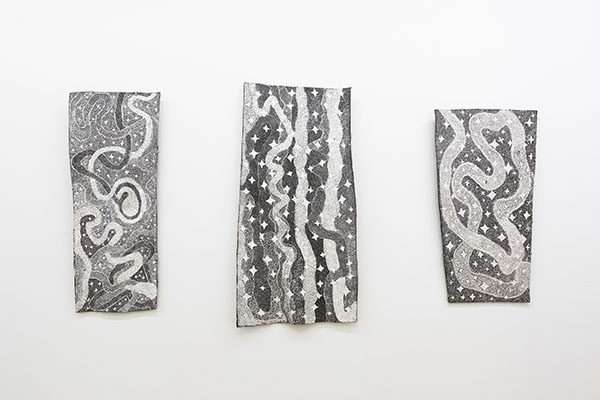 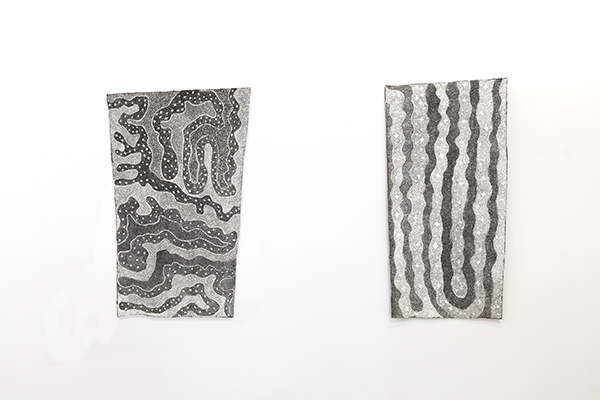 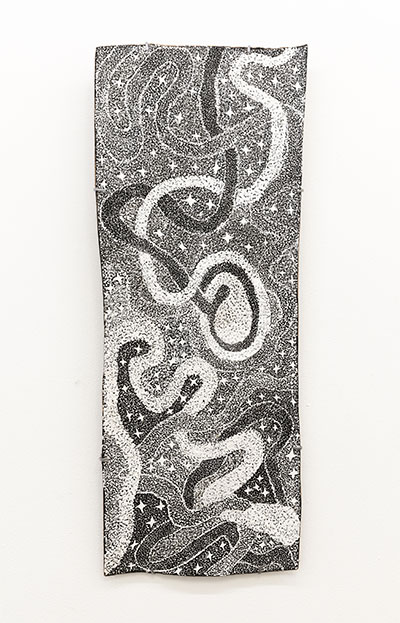 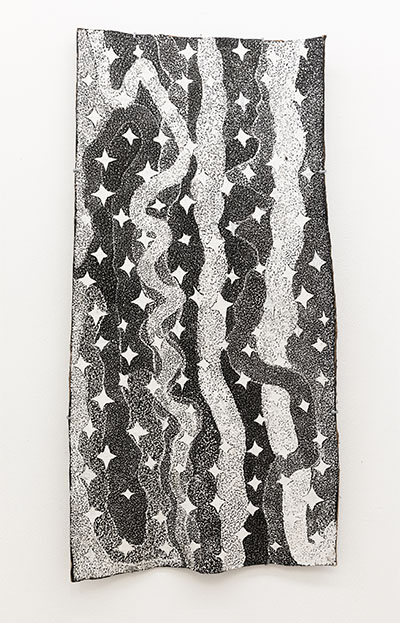 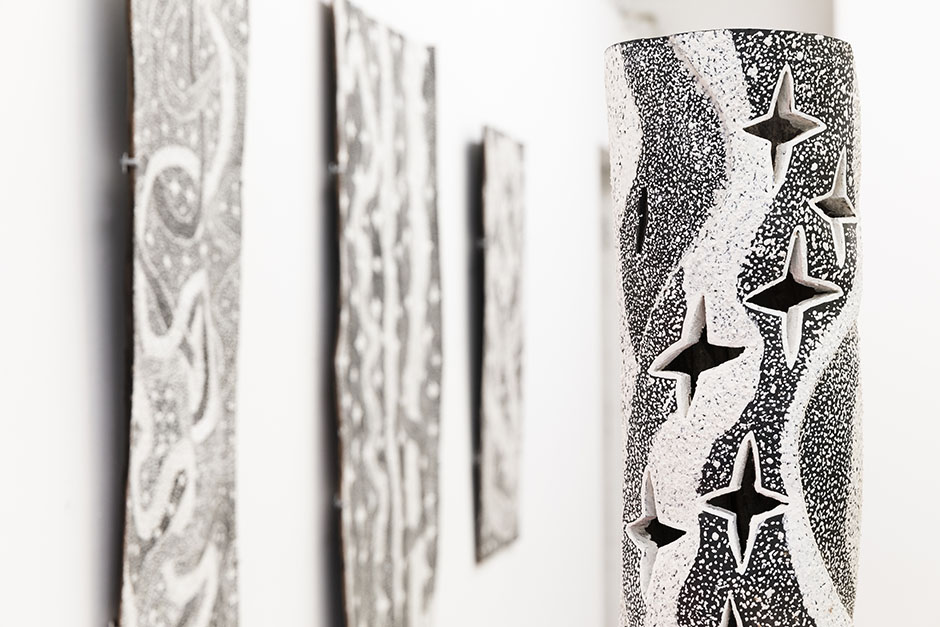 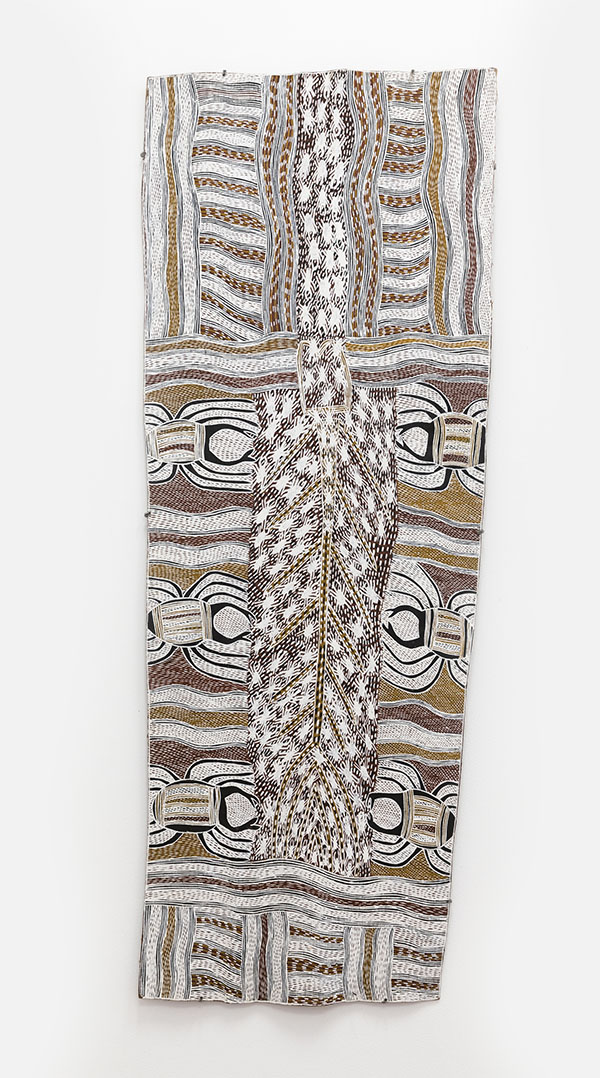 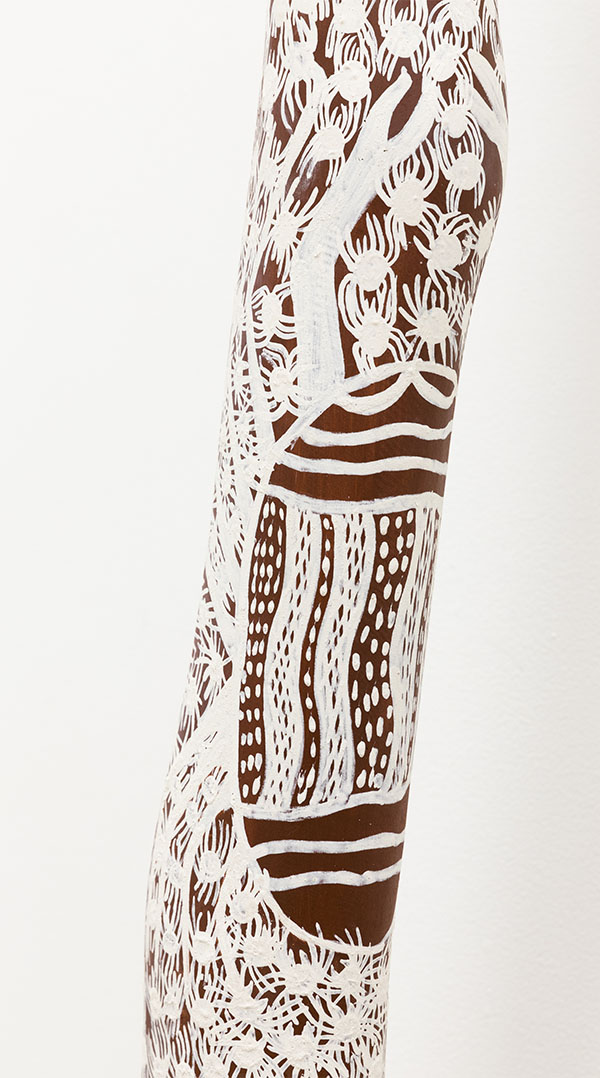 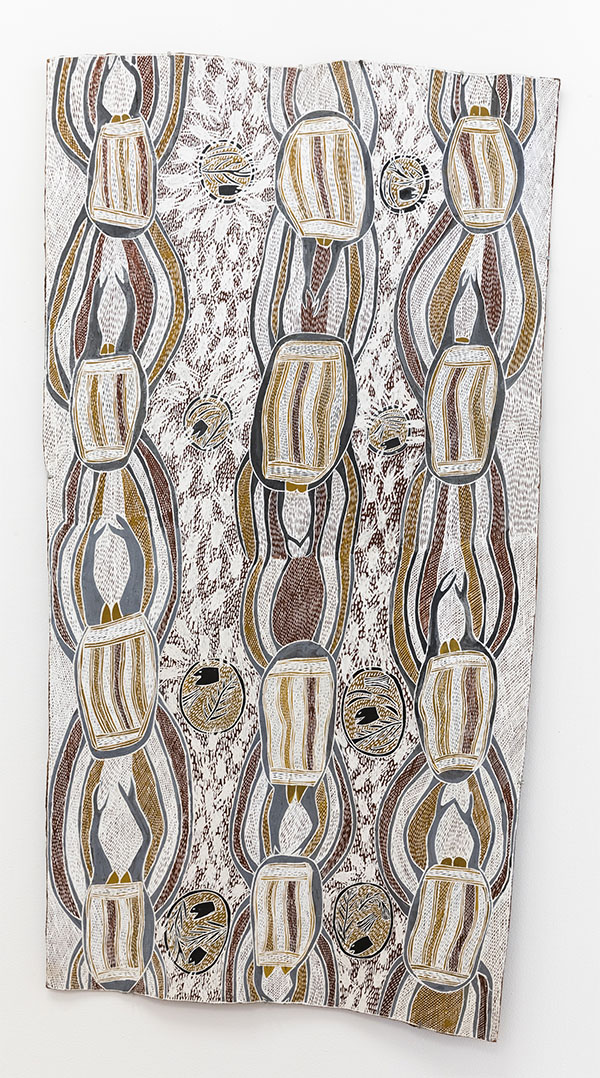 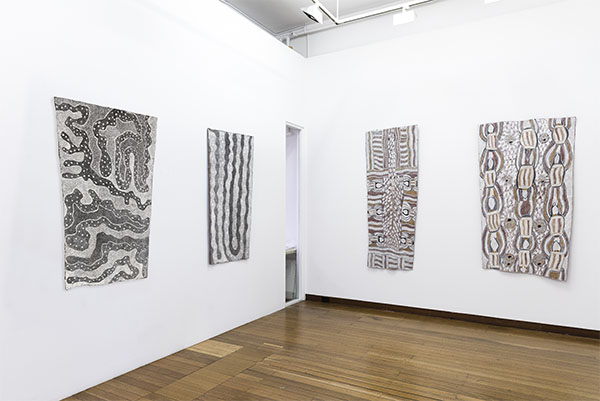 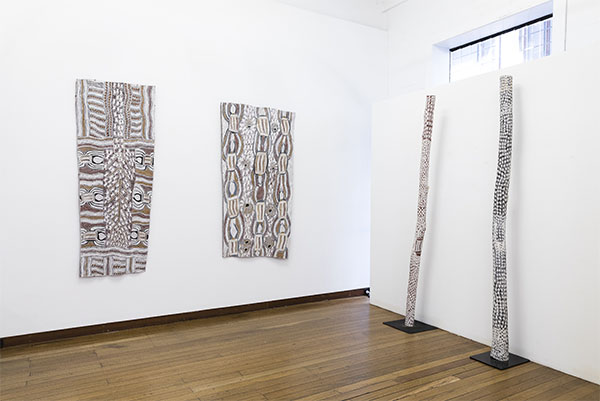 Mrs Maymuru was the daughter of the great artist Narritjin Maymuru and under his instruction was one of the first generation of Yolngu women to become a major artist using sacred clan designs. Mrs Maymuru lived either at the homeland centre of Yilpara or at Dhuruputjpi in her husband Dhukal Wirrpanda’s Dhudi Djapu clan country at the northern perimeter of Blue Mud Bay, close to her own Manggalili clan lands. She was the community’s schoolteacher for a decade before becoming a full-time artist. Like her father she was a fierce advocate for homeland life. In 2003 she was awarded the Best Bark painting prize at the 20th National Aboriginal and Torres Strait Islander Art Award of the Museum and Art Gallery of Northern Territory. She is represented in most Australian state art gallery collections.

Language Group Yolngu. Naminapu Maymuru was born a member of the Mangalili clan, at the Yirrkala mission station. After attending the mission school, she worked for sometime in the store and craftshop and also helped out in the local bank. When the Homeland Centre of Gurka’wuy was established in 1973, Naminapu went to live there with her husband and young family of three children. These were the early days of the Homeland Movement, which included the establishment by Narritjin of the Mangalili homeland of Djarrakpi (extensively documented by Ian Dunlop of Film Australia in the twenty two films of the Yirrkala Film Project.

During the years she spent there, Naminapu worked as a teacher trainee and later, on her return to Yirrkala, completed her teacher training. When she later married Leon White, a teacher in the Northern Territory, Naminapu went to live for several years in Melbourne and Darwin. She has travelled within Australia quite extensively as well as to Japan. In 1985, Naminapu returned with her husband and family to live in Yirrkala, now no longer a mission station but a locally governed Aboriginal community. Following her return, she taught art to the children at the local school and then began working at the Craft Shop attached to the Buku-Larrnggay Arts Centre. In 1990, she was appointed Curator of the recently established Art Museum attached to this Centre, a position that she held until 1996.

Naminapu has a distinguished exhibition history beginning with her works being exhibited with those of Bandak Marika, another important Yirrkala woman artist, at a two-woman exhibition held in Warnambool and Sydney, in 1990. Her works are also frequently included in combined exhibitions in Australia and overseas and she is now herself represented in most major institutional collections in the country. In 1996 her limited edition linoprint triptych “Nyapilingu” was awarded the Best Work on Paper at the 13th Telstra National Aboriginal and Islander Art Awards. Two years later, her bark painting “Maŋgalili” was awarded Joint Runner-up at Normandy Art Award. In 1998 she was selected as the National Indigenous Heritage Art Award, followed In 2005, by the triumph of winning  the Wandjuk Marika Memorial 3D award at Telstra National Aboriginal and Torres Strait Islander Art Awards with one of her memorial poles painted with the Milŋiyawuy or Milky Way design. Naminapu has exhibited regularly over the years, her work is held in numerous major collections and she has won several awards including the 2000 HC Coombs Creative Arts Fellowship at the Australian National University.

Buku-Larrnggay Mulka Art Centre, in the coastal Arnhem Land community of Yirrkala, was established in 1975 as a resolute act of self-determination. Coinciding with the withdrawal of the Methodist Overseas Mission and the Land Rights and Homeland movements, Buku-Larrngay Art Centre was founded in 1976 by Yolnu to take their destinies into their own hands. This happened in the spirit of Narrrritjin Maymuru, who had already set up his own beachfront gallery in the 1960s from which he sold art that now graces major museums and private art collections worldwide. Art from Yirrkala also belongs to the first indigenous art forms that were actively used for political reasons, especially in the fight for land and sea rights.

Balnhndhurr – A Lasting Impression, 2017-2019. An Artback NT touring exhibition celebrating twenty years of printmaking through the Yirrkala Print Space based at Buku-Larrnngay Mulka Art Centre.
Under the Stars, 2020. Art Gallery of NSW: https://www.artgallery.nsw.gov.au/exhibitions/under-the-stars/