This exhibition sees four artists illuminate the saltwater estate of Rulyapa—part of the ocean between Yirrkala and Dhambaliya (Bremer Island), in North-East Arnhem Land. The artists merge tradition with knowledge that is as solid as a rock: the patterns that show their obligations and the raw kinetic power of water. These obligations now converge with global existential frames of ecocide and rising mean sea levels.

One guide in this choppy water is Siena Stubbs, who writes within The past is in the present is in the future: ‘For 60,000 years, we as Yolngu have lived in harmony with the land through our system of gurruṯu, the system that relates everything in the world to each other. Through gurruṯu, everything is connected. I relate to you, you relate to me, we relate to everything in the world, From the wäkuṉ (mullet) in the Gulf of Carpentaria, and the current they follow, to the pockets of rainforests that surround us and the guyita (witchetty grubs) within them.” (1)

Then consider Dhuwarrwarr Marika’s larrakitj (hollow ceremonial log), painted with white gapan (ceremonial clay). The larrakitj represents the unwavering rock that grounds each clan to their identity while ephemeral gapan shows the changing clouds re-building with every passing season. Dhuwarrwarr’s series of paintings titled Gäma-Wukitj Rulyapa, give voice to the power of the waves as they crash and swirl around the semi-submerged rock.

The eloquence of sea country is visualised as a part of the estates passed down through Yolngu clans—Dhuwarrwarr Marika is Siena’s waku (great-grandmother). Sea country forms part of an indissoluble whole estate. Clan members belong to it, identify and are identified with it and have delineated responsibilities for its care—from the most powerful elements to the barely-there. Djalinda Yunupingu for example, paints gossamer Yathiny, a type of blue sea anemone that floats on the waters surface where turtle swim, and upon which they feed.

Ishmael Marika’s complex etchings of traditional designs on discarded aluminium panels and his animated video drawings, capture the water in the morning light. The discarded metal used as medium queue us to recall that alumina refinery is now being de-commissioned. The embossed surface shimmers like a sacred spring in a post-capitalist wasteland. He explains of his video work, The Goḏarr’mi series of Rulyapa, ‘I am singing the songline and animating the sacred design, Rulyapa. Rulyapa is the Rirratjingu moṉuk gapu (saltwater) between Yirrkala and Bremer Island. In this artwork the Rulyapa is rough, representing the angry feelings of people.’

In Dhurrumuwuy Marika’s formidable bark paintings, as Will Stubbs has observed, ‘the resonation between pattern on pattern is the key to what is happening.’ Dhurrumuwuy and Ishmael’s grandfather is Roy Dadanyga Marika (c.1931-1993), known as a father of Land Rights. Other histories are being subtly delineated here.

Yolngu are good at dealing with existential threat. In 1963, Nabalco (now Rio Tinto) obtained leases from the Australian Government without Yolngu consent. Yolngu ownership was not recognised in Australian law. Dhuwarrwarr’s father Mawalan Marika and his brothers were involved in the historic legal action known as Gove Land Rights Case (Milirrpum v Nabalco Pty Ltd). The ruling against intrinsic native land rights in 1971 led to the The Yirrkala Bark Petitions and the passing of the Aboriginal Land Rights Act (Northern Territory) 1976, granting nominal protection.

The practical reality was that residents in the new mining service town of Gove/Nhulunbuy and visitors were freely trespassing. The land was suffering. After much discussion, Yolngu leaders from Galiwin’ku in the north to Blue Mud Bay in the south established Dhimurru Aboriginal Corporation in 1992 to sustainably care for ancestral country and assist visitors safety. One of the important elders who guided Dhimurru was the late Roy Dadaynga Marika whose vision was, ‘...that the Dhuwa and Yirritja land will continue to be looked after through the connection of yothu yindi (child and mother).’ The land is now heavily impacted by over 50 years (three generations) of unwanted bauxite mining, a refinery, a sea port and a town.

In 2006, a Sea Country Plan furthered the Yolngu vision for the future. Seven years later, Traditional Owners formally dedicated additional areas of their land and sea country to Dhimurru Indigenous Protected Area (IPA), now comprising 550,000 hectares including sea country extending 40km out to sea from the coastline. An IPA enables conservation management by legal and other means such as partnerships with other agencies like the Parks and Wildlife Commission and Fisheries. The full nature and extent of Yolngu sea rights however, remain largely unrecognised in Australian law.

As the subject of climate change continues to dominate headlines, exhibitions such as this one show how powerful artists’ work can be in calling for environmental action. COP26 in Glasgow, which took place in November 2021, ended with dismal predictions showing we might still see a 2-3 degree rise in emissions this century, which will mean an ongoing series of ecological calamities. The waters of Rulyapa also identify with the seasonal currents connecting northern Australia, the Indonesian archipelago and Torres Strait. At an average of one metre above sea level, many parts of Northern Australia will, like the islands of Kiribati, Tuvalu and Torres Strait islands Bolgnu and Saibai, be inundated—as will harbours like Jakarta in our archipelagic neighbourhood. Traditional owners of Bolgnu and Saibai have initiated legal action following in Eddie Mabo’s footsteps.

Australia is the third-largest fossil fuel exporter in the world behind Saudi Arabia and Russia, and is expanding production and subsidising catastrophe. Our nation is particularly vulnerable to erosion and inundation. Many thousands of kilometres of the Australian coastline are at risk from rising sea levels and extreme weather events.(2)

RISE acknowledges a debt to the great exhibition Saltwater: Yirrkala Bark Paintings of Sea Country—Recognising Indigenous Sea Rights. Djambawa Marawili AM said in 1999, ‘It is time for non-Aboriginal people to learn about this land, learn about the waters. So if we are living the way of reconciliation, you must learn about Native Title and Sea Right.’(3) 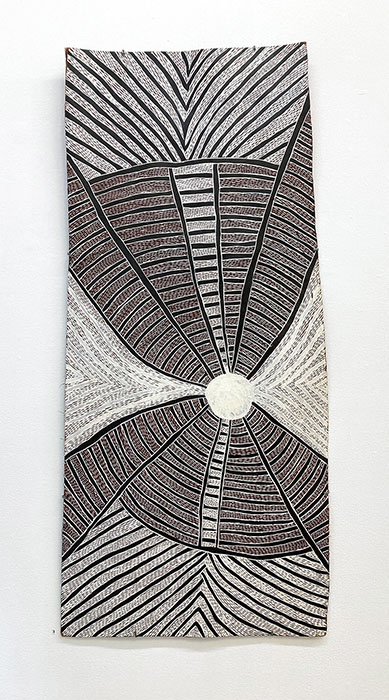 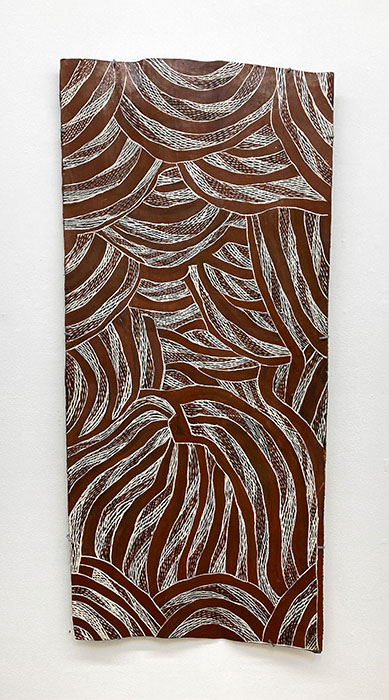 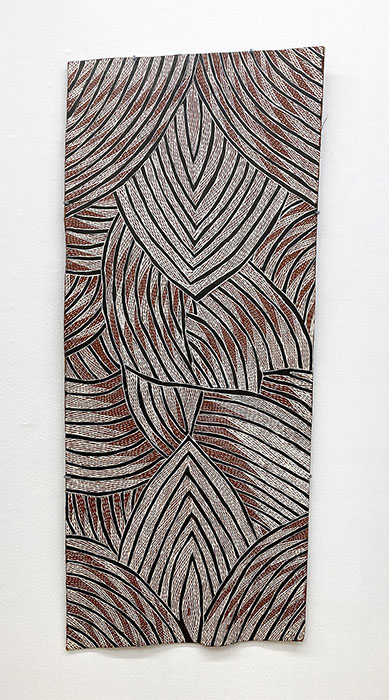 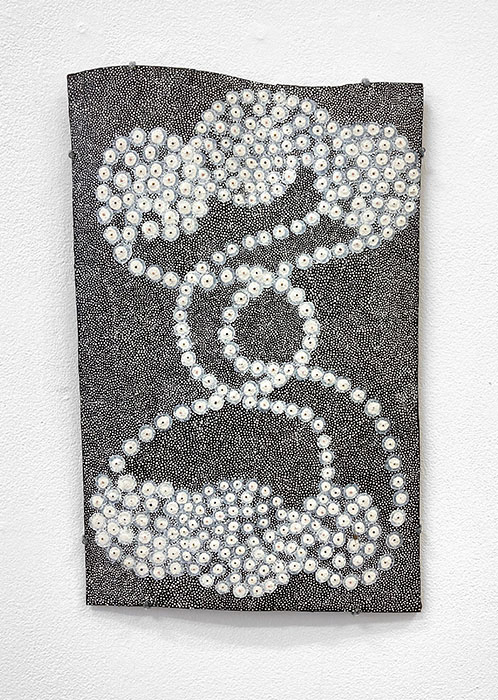 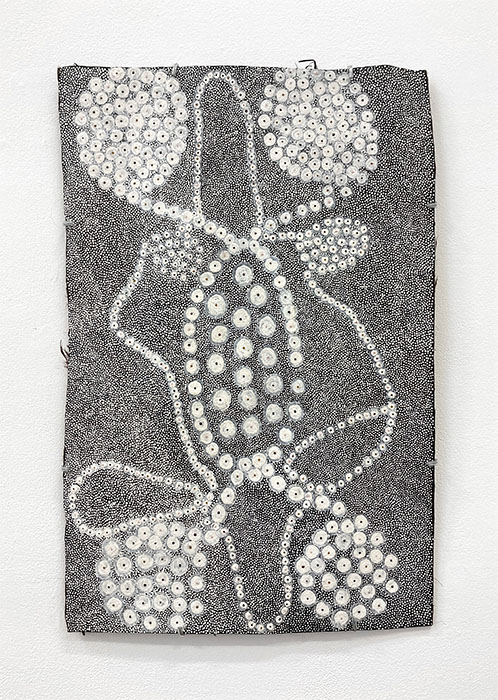 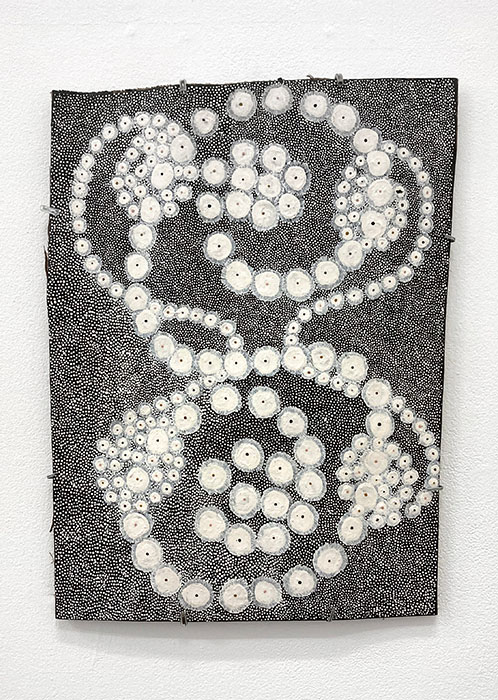 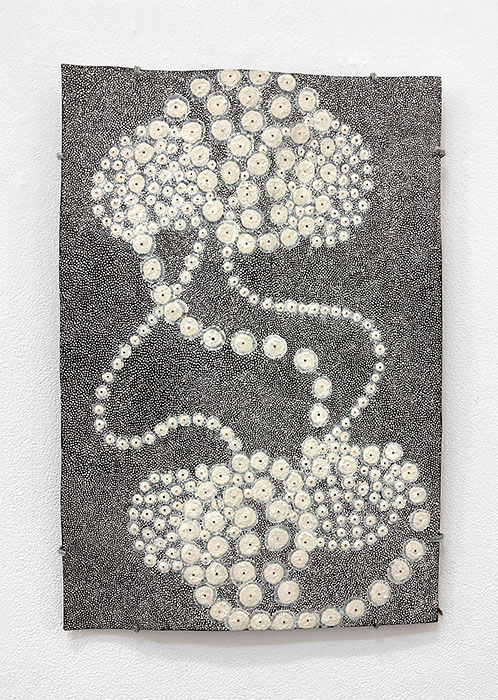 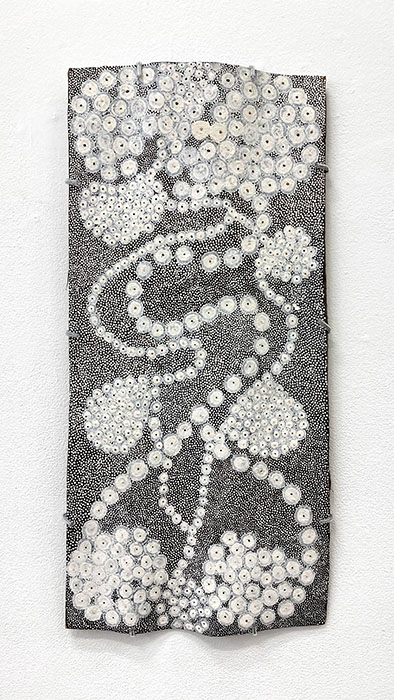 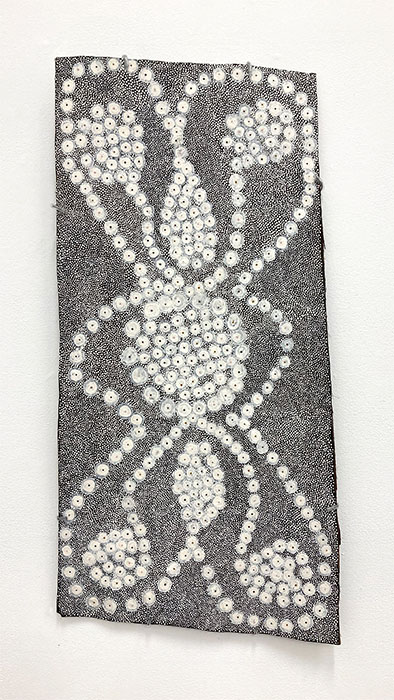 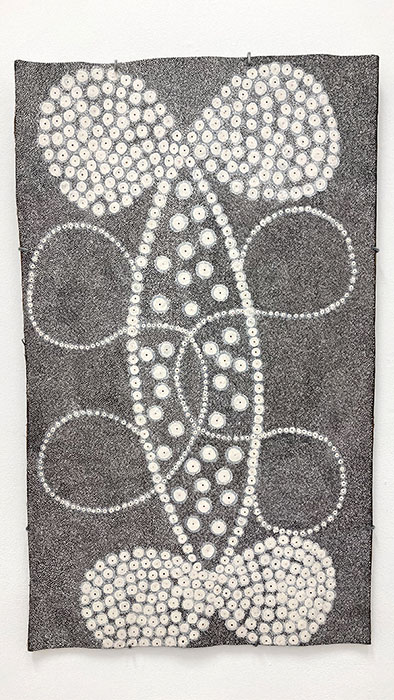 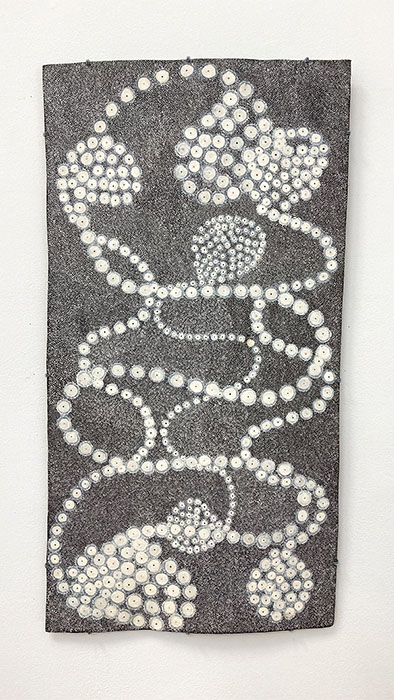 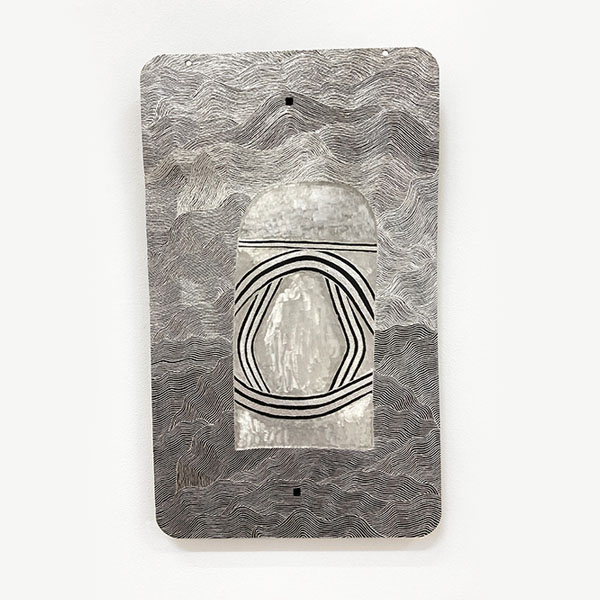 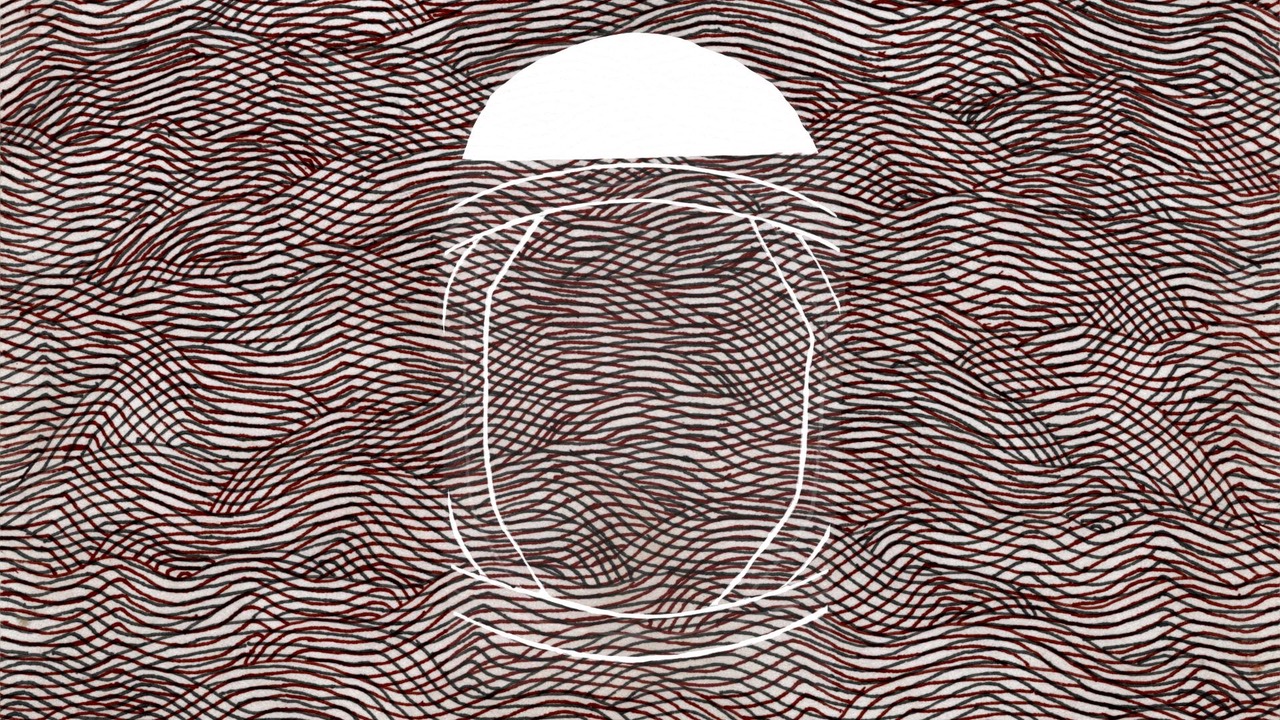 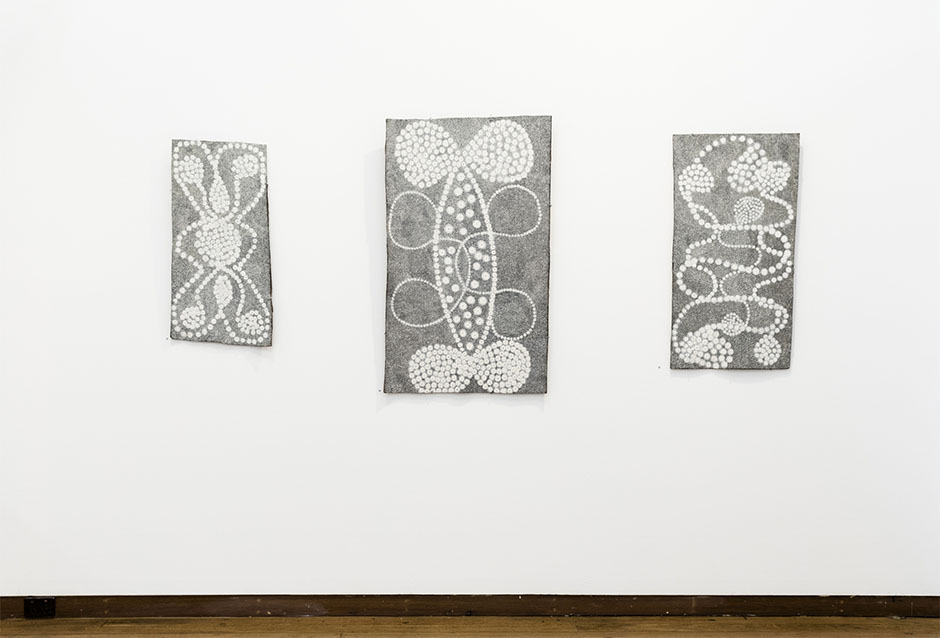 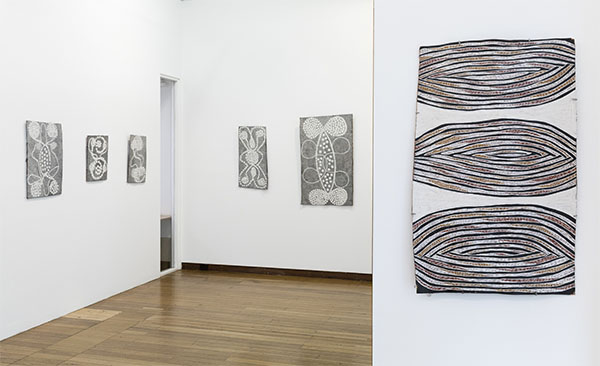 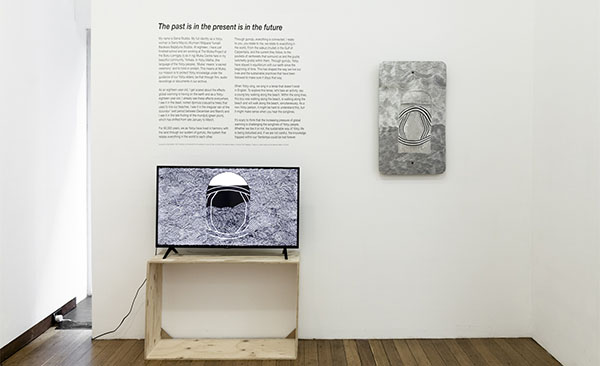 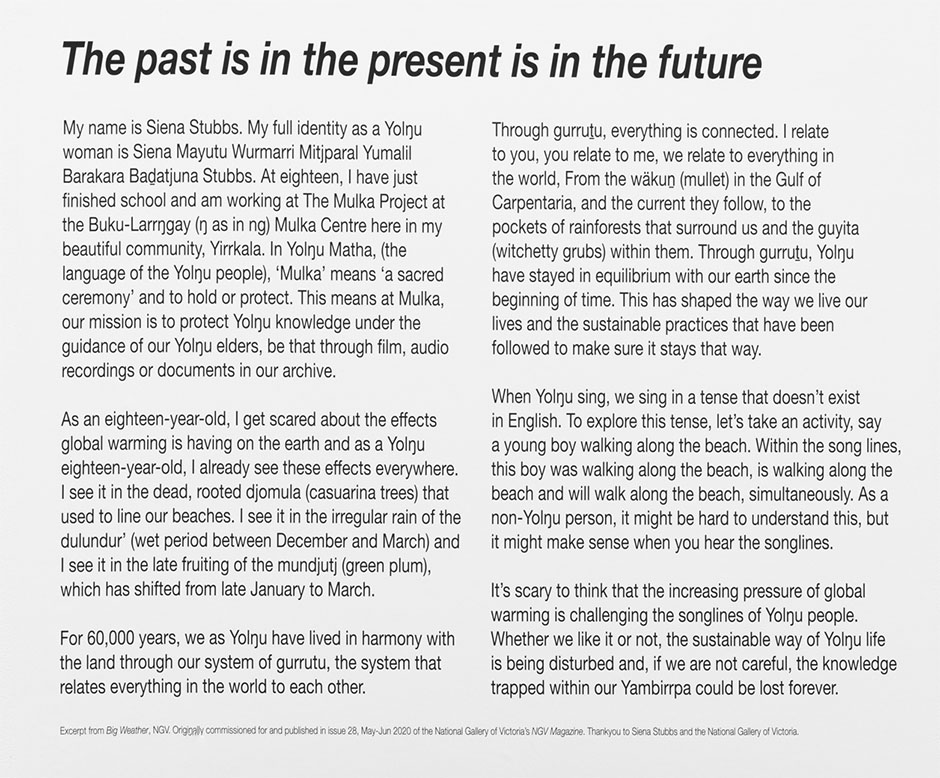 Dhuwarrwarr Marika is from the Rirratjingu and Miliwurrwurr clans of Yalangbara in North-East Arnhem Land. The Marika family are highly regarded as gifted artists and able educationalists, cultural ambassadors, environmentalists, and activists. Dhuwarrwarr’s father Mawalan Marika and his brothers were involved in the Gove Land Rights Case. Dhuwarrwarr is the first Yolnu woman authorised to paint sacred designs on her own and since the late 1980s has participated in group shows and is represented in most Australian state galleries. In 2010 the National Museum of Australia presented Yalangbara: Art of the Djang’kawu an exhibition of artworks by the Marika family exploring the journey of the Djang’kawu ancestors. Her commanding work was seen in By the Stars, Wind & Ocean Currents at Cross Art in late 2019.

Ishmael Marika is a young Rirratjingu clan leader, film maker and award winning Yolngu digital artist. Ishmael has exhibited at major institutions and galleries throughout the world. He is creative director of the pre-eminent Indigenous media unit the Mulka Project. His grandfather is the late Roy Dadanyga Marika (c.1931-1993) one of the fathers of Land Rights. Ishmael states that, "My grandfathers’ went through the struggles and the hard times fighting for the land and fighting for the people."

Siena Stubbs is an emerging filmmaker, artist and writer who won the best emerging artist at NATSIAA in 2019. Siena Stubbs shares her reflections on the sustainable practices in her community in North-East Arnhem Land that are coming under threat because of the changing climate. Dhuwarrwarr Marika is Siena’s waku (great-grandmother or child).

Djalinda Yunupingu is an outstanding emerging artist first shown at Rising Stars at Outstation Gallery in Darwin. Her mother’s Rirratjingu clan sea country is at Yirrkala, the waters between the mainland and Bremer Island. These waters are shared with the Djambarrpuyngu clan.

Special thanks to the artists and David Wickens and Will Stubbs at Buku Larrnggay Mulka.

Thanks to Siena Stubbs and to National Gallery of Victoria (Myles Russell-Cook) for permission to use Siena’s essay commissioned for the exhibition Big Weather (2020-2022). At The Cross Art Projects: Belle Blau, design, Simon Blau, installation, Susan Gilligan, administration and Phillip Boulten.

The concurrent exhibition Big Weather at National Gallery of Victoria, provides unique insights into specialised knowledge of weather systems and a First Peoples view on climate change. [Download Siena Stubbs’ essay ‘The past is in the present is in the future’ as a pdf] 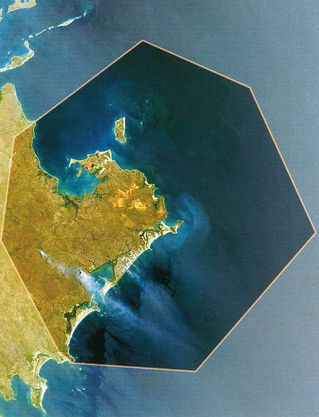 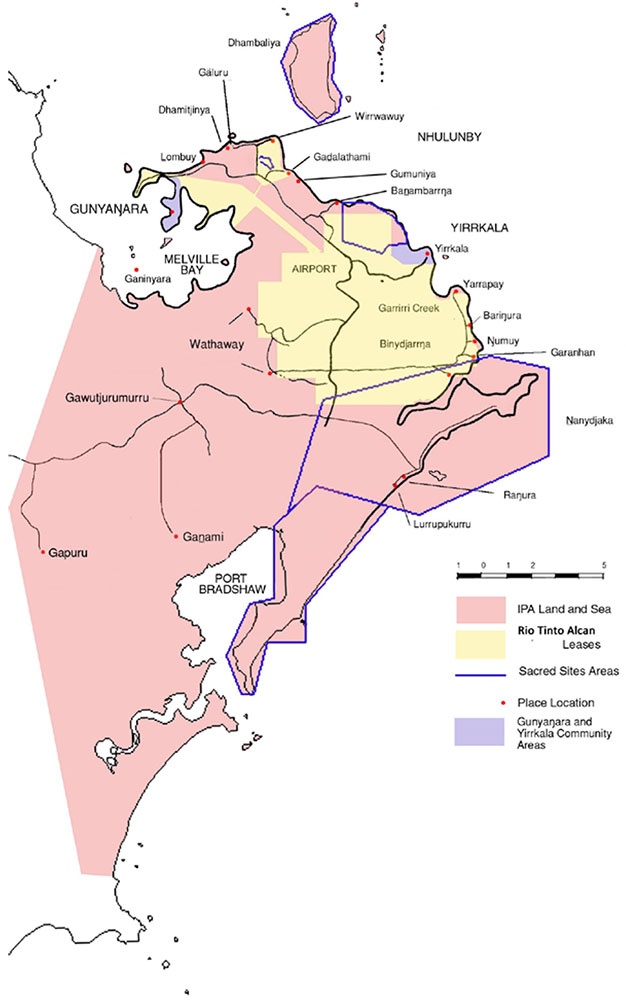