ELASTIC model for collaboration in Australia and Timor-Leste

This project developed through the shared experiences of Timorese and Australian artists as they travelled through eleven districts to document the traditional practices of women weavers. The artists have committed to sustainable artmaking within the stark political and economic environment of Timor-Leste’s reconstruction, seeking to generate crosscultural practices where there is little cultural infrastructure. The collaborative Elastic print folio won the 2015 Fremantle Arts Centre Print Award.

Victor De Sousa is an artist and filmmaker. Victor studied painting at the Dili arts collective Arte Moris and moved into film when Catalan designer/film maker David Palazón taught at the school. He was Artist in Residence at Griffith University Film School in 2010. His debut film Uma Lulik, celebrated as the first film by an indigenous Timor-Leste filmmaker, was screened at the 2011 Brisbane International Film Festival and in Mozambique and Paris. The film also screened within Narelle Jubelin’s exhibition at CAM Gulbenkian Foundation in Lisbon 2013. Victor has made a number of short films and worked as cinematographer. Victor and David Palazón established the Academy of Creative Industries project and the Dili design and filmmaking practice IDA. Victor also paints large-scale canvases that combine traditional cultural forms and design motifs with strong ideas about cultural renewal as he continues to study and document Timorese traditional weaving, architecture and cultural belief. Victor lives in Dili and Venilale in Timor-Leste.

Narelle Jubelin was co-founder (in 1986) of First Draft Artist Run Initiative that continues today in Sydney. Narelle has been living and working in Madrid since 1996. Her installations and intricate petit-point renditions of heavily charged photographs allow her to explore historical lines interconnecting location and history. She is interested in the way objects travel and translate. Thus, every detail in her work is important: the display, the frame and the site. She has exhibited widely including at Aperto in the 1990 Venice Biennale; Places with a Past in Charleston, South Carolina, a benchmark site-specific exhibition in 1991 curated by MaryJane Jacob; the Hayward Gallery, London in 1992; Museo Reina Sofia, Madrid and the Renaissance Society, Chicago in 1994; and participation in Sydney, Adelaide and Sharjah Biennales. In 2009 Narelle collaborated with Mozambican/Portuguese artist Ângela Ferreira at the Art Gallery of New South Wales and held a solo exhibition at Heide Museum of Modern Art, Melbourne. In 2012–13 she staged a complex of collaborations with university art galleries and non-gallery cross-campus sites at Sydney University, Monash University, Melbourne and Samstag, University of South Australia. Her individual survey exhibition, Plants and Plans with CAM Gulbenkian Foundation, Lisbon incorporated Victor De Sousa’s film Uma Lulik.

Fiona MacDonald is known for her installations of bodies of work that draw on local cultural traditions, and social and natural history. Her installations take the form of conversations about undercurrents in social processes of inclusion and exclusion. She has participated in major contemporary exhibitions such as the Biennale of Sydney, Adelaide Biennial of Australian Art, and Australian Perspecta.

She participated in the opening exhibition of the Jean-Marie Tjibaou Cultural Centre in Noumea, New Caledonia. Selected recent exhibitions and projects include the Future Feminist Archive, Cross Art Projects (2015–16); Cementa 15 and 13 at Kandos; Bimblebox Art Project; Ghost Citizens: Witnessing the Intervention (touring); Feminage: the Logic of Feminist Collage; Green Bans Art Walk and Exhibitions, Sydney (2011); Local Studies: Legend and Legacy, Wollongong City Gallery (2010); Local Studies: A View from Central Queensland Archives, Artspace Mackay (2009); Strangely Familiar, UTS Gallery, University of Technology, Sydney (2005) and Pace University, New York. She has several monographs on her work as well as over twenty group exhibition catalogues. She has executed several major public art projects including the concept for the Sea of Hands. Fiona MacDonald was born in Rockhampton and lives and works in Ilford, NSW and is curator of Kandos Museum.

Maria Madeira b. 1969 is an artist, teacher and cultural adviser committed to conveying Timor-Leste’s culture and traditions to future generations so they can learn the beauty and strength of their culture and discover who they are in the world. She studied at Curtin University (B.A. Fine Arts 1991, Graduate Diploma of Education [Major in Art] 1993) and at Murdoch University (B.A. in Political Science, 1996) in Perth. She is fluent in English, Portuguese and Tetun, and is studying Bahasa Indonesian. From 2001 she worked in Dili as an interpreter and translator, including working in 2004 as an interpreter, translator and cultural adviser for the United Nation Serious Crimes Unit investigating Crimes Against Humanity committed in 1999 and 2000. While in Dili, Maria also worked voluntarily as an art teacher at the Arte Moris art school, providing free tuition to local youths. In 2014 she exhibited Ina Lou at Galeri Cipta II in Central Jakarta, the first solo exhibition in Indonesia by a Timorese female artist. She has exhibited in Australia, Portugal, Macau, Brazil, China and Timor-Leste.

Veronica Pereira Maia (traditional name is Buat Salvak) born in Fahorem, Covalima, Timor-Leste; artist, weaver. In 1975 she was a refugee in Portugal as one of the thousands fleeing civil unrest. In Portugal she taught culture including to young Maria Madeira. She undertook residencies and exhibitions at Museo de Traje/ National Museum of Costume, Lisbon. Since 1985 living in Darwin. After the Santa Cruz Massacre in 1991, she was active in AFFET and in their theatrical street demonstrations, including performing in theatre productions Diablo (Darwin Wharf, 1992) and Spirits Cry Freedom (1993). She undertook weaving workshops at Northern Territory Museum of Arts and Sciences, Darwin (1989) and Craft Council Gallery, Darwin (1995). In 1996 she was key to the art installation Tuba-rai metin: firmly gripping the earth, for the 1996 Darwin Fringe Festival with the weaving of a memorial for the victims of the 1991 Dili Massacre, a project begun in 1994. She completed the five-panel Tais Don with the names of the identified 271 people who died, some months before the Referendum of 30th August 1999. On 12 November 2000, the new Government of Timor-Leste laid the Tais Don memorial weaving at Santa Cruz Church in Dili. Her work is held in public and private collections in Portugal, Japan, and Australia. 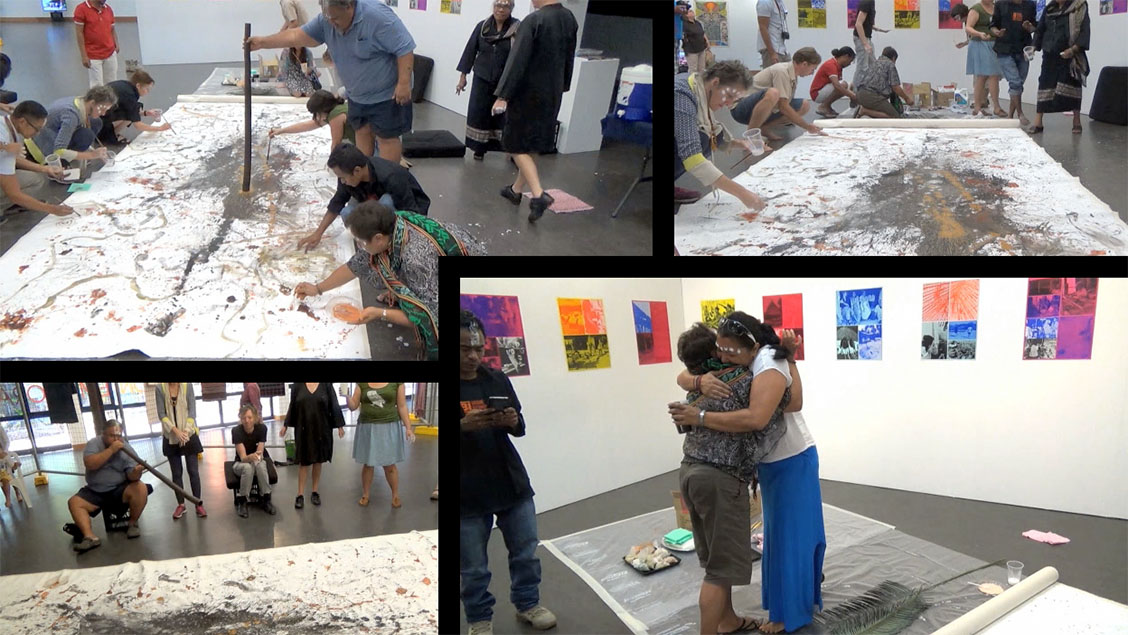