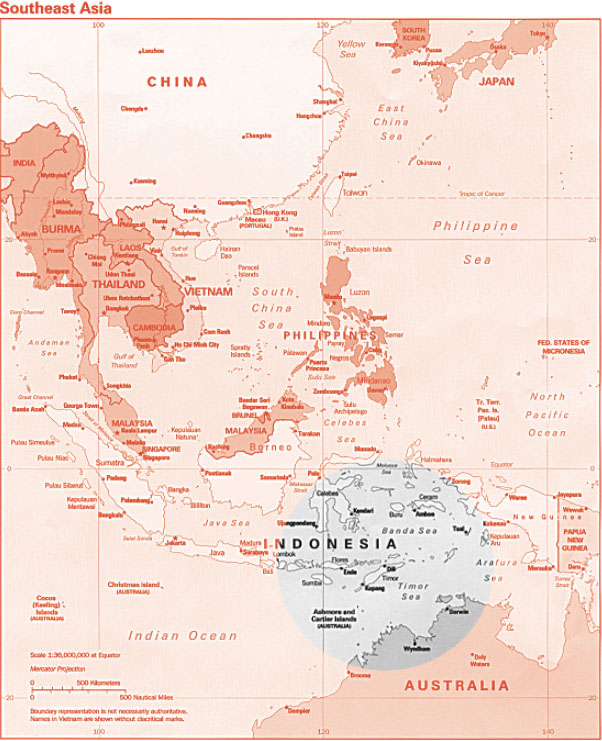 Timor is a divided island, with the western half constituting a part of Indonesia and the eastern half comprising the independent Democratic Republic of Timor-Leste. This division grew out of competition between two colonial empires from the 17th century onward, with the Dutch gaining control in the west and the Portuguese in the east. Portuguese occupation was marked by rebellion into the early twentieth century. For much of that century, Portugal was itself under an authoritarian regime of the dictator Salazar. In 1974, Lisbon abandoned its remaining colonies. Timor-Leste declared its independence from Portugal on 28 November 1975 but was only independent for ten days until Indonesia invaded on 7 December 1975 and occupied the country for 24 years. From 1975 to 1999, according to United Nations estimates, Indonesia’s occupation resulted in the deaths of some 200 000 people. In the months following the invasion, some 60 000 were killed. Those first years saw the establishment of nearly 150 concentration camps.

The official languages are Tetun and Portuguese. There are about 16 indigenous languages. Majority languages are Tetun, Galole, Mambae, and Kemak followed by Makasai, Bunak, Tokodede, Galoi, Fataluku and Vaiqueno. Bahasa Indonesia has ceased to be an official language although it, along with English, has the status of a working language under the Constitution. Timor-Leste has been rated by the United Nations as the poorest nation on earth. Food insecurity is widespread throughout Timor-Leste.

1942 Japan bombs Darwin and on the same day invades Dili.

1949 When Indonesia’s struggle for independence from the Netherlands culminated in 1949, West Timor became part of the new Republic of Indonesia.

1965 Independence leader Ahmed Sukarno is deposed by General Suharto. Suharto’s regime massacres in cold blood between 500 000 and one million people followed by two and a half decades of violent repression. Not long after, oil was found in the middle of the Timor Sea by Burmah Oil (now Woodside).

1971 Australia and Indonesia unilaterally shifted the boundaries of oil and gas fields lying in the Timor Sea to Australia’s advantage, despite objection from Portugal. (Treaties 1971–1973.) A bitter contest continues.

1972 Australian troops withdrawn from Vietnam (1972). The national Campaign for Independent East Timor or CIET works in tandem with grassroots struggles against apartheid in South Africa and for Aboriginal Land Rights.

28 November 1975 Timor-Leste declared its independence from Portugal and is independent for ten days.

7 December 1975 The Indonesian military (re-named ABRI) invades, enabled by Australian assent. About 4000 people went into exile in Portugal and Australia in 1975–1976. After 1975, the Australian government position was ‘self-proclaimed ignorance’. Portugal remains the UN recognised administering power during the occupation. The Security Council fails to act to uphold the right to self-determination until 1999. Those first years saw the establishment of nearly 150 concentration camps. UN observers estimate that 60 000 people were killed. After the famine, 200 000 people are thought to have died.

1986 Writer and poet José Ramos-Horta publishes Funu: The Unfinished Saga of East Timor, on the struggles in East Timor and the world’s indifference to them, with a preface by Noam Chomsky.

1989 Australia and Indonesia sign the Timor Gap Treaty when East Timor was still under Indonesian occupation.

1992 Gusmão is captured near Dili. In 1993 he is convicted of subversion and given a life sentence, which is later reduced.

1998 President Suharto was forced to resign and after 24 years of violent struggle, Indonesia under President Habibie, agrees to a referendum. The military arms anti-independence militias.

1997–2000 During three-year ‘descent into hell’, 23 000 armed troops and Indonesia-backed militias killed more than 1000 and displaced most of the population. The brutality and destruction were well planned: the electrical grid, most other infrastructure and three-quarters of its buildings were destroyed, many of national importance, along with the loss of much of the collection of the Timor-Leste National Museum.

1998 Drought emergency exacerbated by resettlement to lowlands and disruption to traditional farming.

1999 United Nations–supervised referendum with the overwhelming majority (80 per cent) supporting a pathway to overcome divisions.

September 1999 Asia Pacific Triennial opens when the East Timor Crisis was at its peak. A boycott was unsuccessfully proposed and work by Indonesian artist Dadang Christanto on genocide and anti-militarism instead carried the crisis: for Api di bulan mei (Fire in May), the artist burned 47 papier-life-size human figures.

2000 Timor Aid Textile Collection was assembled in the years following 2000 ‘to assist in the preservation of an endangered culture’.

May 2002 The Democratic Republic of Timor-Leste is declared and the country becomes the 191st member state of the United Nations. The country’s infrastructure is destroyed, as are valuable documents including, civil registry, health and education records.

2002 Timor-Leste’s Commission for Reception, Truth and Reconciliation (CAVR, 2002 to 2005) established. The destruction of state records by the military, forced CAVR to appeal for external records. The full evidence to the CAVR Inquiry fills two large rooms at the Comarca Prison. The archive is a unique and irreplaceable record of personal experience of thousands of East Timorese during civil war and occupation (1975–1999).

2002 The National Collection: with the assistance of the World Bank and UNESCO, University of Melbourne and the Museum and Art Gallery of the Northern Territory (MAGNT), major parts of the collections are rescued, conserved and returned to the collection, now housed at Vila Verde, Dili, site of the Ministry of Education. Only some 772 of the old total collection of artifacts remain.

2003 Arte Moris (Living Art), a free art school, cultural centre and artist association in the former premises of the former Provincial Museum of East Timor (opened 1995–1999) at Comoro, Dili. The premises are shared with a camp for internally displaced people.

2004 East Timor again starts to negotiate with Australia. The country continues to argue the border should sit halfway between it and Australia, placing most of the Greater Sunrise oil and gas field in their territory.

January 2006 East Timor and Australia sign a deal to divide billions of dollars in expected revenues from oil and gas deposits from the Greater Sunrise field in the Timor Sea. Under the Treaty on Certain Maritime Arrangements in the Timor Sea (CMATS Treaty 2006) agreement, talks on a disputed maritime boundary are postponed. The treaty puts on hold the parties’ boundary claims for fifty years and maintains other treaty agreements (with Indonesia, 1972).

Report on alleged atrocities during Indonesia’s 24-year rule is presented to the UN. It finds that the occupation was directly responsible for the deaths of more than 100 000 East Timorese.

May 2006 Riots further destroy Dili. Foreign troops arrive to restore order as clashes involving former soldiers, who were sacked in March, descend into wider violence. At least 25 people are killed and about 150 000 take refuge in makeshift camps.

June–July 2006 Prime Minister Alkatiri resigns over his handling of the violence. Jose Ramos-Horta is named as premier.

August 2006 Non-military peacekeeping mission, the UN Integrated Mission in East Timor, or Unmit, is set up.

2006 Artists undertake a peace campaign of posters and murals throughout Timor to help restore peace to the troubled country.

1975 to stop them exposing the invasion of East Timor. Ramos-Horta attack

February 2008 President José Ramos-Horta is shot in the stomach by renegade soldiers at his Dili residence. Rebel leader Alfredo Reinado is killed in the attack.

2009 Exhibition Husi Bei Ala Timor Sira Nia Liman: From the Hands of our Ancestors: Art and Craft from Timor Leste, a partnership between Museum and Art Gallery of the Northern Territory and Timor-Leste Ministry of Education and Culture.

2012 The World Development Report 2011 found that on average, post-conflict countries take between 15 and 30 years, a full generation, to transition out of fragility and to build resilience. ‘It is against this backdrop that Timor-Leste’s social and economic development can be seen as remarkable.’

2013 Joshua Oppenheimer’s documentary The Act of Killing (2013) showed perpetrators and paramilitary leaders boastfully re-enacting their mass killings in Indonesia in 1965–66, still in power and confident they could never be charged with crimes against humanity.

2013 UN peacekeepers led by Australia, depart. Timor-Leste’s population of 1 172 390 people live in an economy where offshore natural gas and oil reserves provide the majority of government funds. Coffee is the main private sector export with some sandalwood production (a staple in perfumes and used to build sacred houses). Aid money continues to support the building and infrastructure.

December 2013 Journalist Philip Dorling reveals that during treaty negotiations in 2004, Australia bugged the offices of Timorese cabinet members. ASIO raids the Canberra offices of the lawyer representing East Timor at the Court of Arbitration in the Hague and confiscates the passport of a former ASIS officer who was to be a witness for the Timorese government.

December 2014 Ties with Australia are strained when East Timor accuses Australian intelligence officers of secretly bugging its cabinet meetings to gain an advantage in oil and gas negotiations in 2004.

2015 Report on Timor Archives by CHART, Melbourne, notes positive developments such as some links with Indonesia’s National Archive, some digitised records of recordings of CAVR public hearings lodged with the British Library.

March 2016 ‘Hands off Timor’s Oil’, a day of protest led by Xanana Gusmão in Dili and around the world. The Timor Sea Justice campaign asks that the Australian Government resubmits to the maritime boundary jurisdiction of the International Court of Justice and returns all revenues taken unilaterally from the Timorese side of the halfway line. Frustrated by Australia’s refusal to negotiate directly, Timor-Leste has taken rich Australia to the UN for compulsory conciliation. The panel’s non-binding recommendations are expected early 2017.